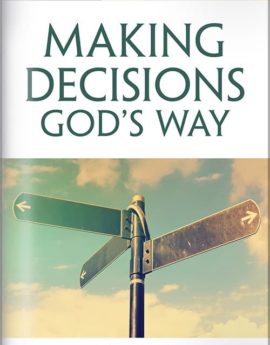 
I wrote before about Chick Tracts - little comic books about Jesus that some evangelicals leave in public places to "educate" the heathens about things like evolution.  For example, did you know we are not descended from monkeys?   It's true!  Otherwise, why would there still be monkeys?

Of course, even biologists don't believe that. The theory of evolution is that we are all descended from a common ancestor  - all of us, plant or animal.  Which is why our DNA is so much alike.   But like I said, it's a theory, and mixing scientific theory with belief (the latter not being the same as fact) is just asking for trouble.

In this case, the tract was a "discover series" booklet from RBC or what is now called "Our Daily Bread" - which is a third generation evangelical church in Michigan. The booklet in question was all about "Render Unto Caesar" which posited that you should pay your taxes.  They even went to so far as to condemn those who look to the Bible for "tax protesting" advice.    I looked them up online and they seemed fairly harmless -  not many controversies or outlandish hateful positions on things.

I also found a blogsite where someone critiqued their positions.  It was a "former Catholic" site and the author, having been indoctrinated in the "one true religion" all his life, decided to abandon Catholicism for born-again faith, which he now realizes is the one true religion.   Irony is lost on such folks.  His critique of "Our Daily Bread" was that they were not militant enough on the "hot button" issues like abortion (not calling for shooting abortion doctors!  Straight to hell!).   Worse yet, the author claimed that RBC people were guilty of the ultimate thought crime - Ecumenicism.

Ecumenicism - you know, the crazy idea that other people may have different belief systems than you, and that it's OK not to kill them over this.   Radical stuff, I know.   Yet most of the world seems caught up in the opposite idea.  Just as most blacks in the US are not killed by whites or police officers (but are killed by their own kind, at a horrific rate), most Muslims in the world are not killed by evil American drone missiles, but rather by each other.   Sunnis and Shiites kill each other at an alarming rate - with various attacks, car bombs, suicide vests, and outright wars.   There is no need for America to intervene in the Middle East - just sell them the weapons they want, and let 'em go at each other.   Until 9/11 that pretty much was our Middle Eastern policy.

Christians used to do this in a big way, but not since the accords in Northern Ireland, have Christian sects gone after each other over who is the one true Jesus.  But it was not always so - Protestants and Catholics waged bloody wars over the years, particularly in what is now the UK.  And of course, Catholics did a bang-up job of torturing and murdering people, particularly non-Christians, in places like Spain, back in the days of the Inquisition.

Today, we see similar stuff going on in India, where Hindus are going after Muslims and vice-versa, or in Myanmar, where Buddhists go nuts and kill Muslims, or even in Tibet, where militant Buddhist Priests run amok on occasion.  There really is no religion that is safe from this sort of nonsense, at one time or another in its history, in some time or place in the world.

Which is why I say that organized religion is a very evil thing - designed with one thing in mind, and that is to control your mind to advance the earthly goals of the leaders of that religion.   You can't have ten "one true" religions in the world - nine of them have to be wrong, maybe all ten.  Oh, they cloak it in a lot of hoo-doo and whatnot.  The Dali Lama and the Pope wear robes and seem like saintly people, but their real agenda is maintaining and expanding their power base.

On the scale of one to atrocity, leaving bible tracts in public restrooms is pretty low - maybe a 0.1 or so.  But it is creepy.  And the Bible, being written, edited, and translated by humans, often to their own ends, has a lot of crazy stuff in it that makes no sense.  Jesus stealing horses?   Jonah in the whale?  The holy ghost?   A lot of it makes no sense, but people use it and "explain" the meaning to us in a way that usually ends with a collection plate.

You can have belief and not pay for it, or pay for it in ways that help society, not some Cardinal buy a $42M mansion.  And while starting a religion might seem like a real profitable venture, bear in mind that it is the second or third generation of leaders who make the real money, once the first generation is persecuted for their beliefs.

The name of this blog is Living Stingy, not "how do I buy pastor a new Lear Jet?"  Tithing 10% or more of your pre-tax income to any church is just insanity, particularly given all churches' history of how they spend money - on air-conditioned dog houses or Sistine Chapels.  And I've met people in life who ended up broke and bitter, after giving over a substantial portion of their wealth to some religious leader (not God) and then get tossed out of the club when their well runs dry.

Your relationship with God is a no-cost deal.   He doesn't want your money, as he can't spend it.  And he's not impressed with your cathedral, as he can conjure up far nicer digs, with a wave of his magic wand.  Belief can be a comforting thing, it can also be corrupted to earthly ends.

And as for answers to the unanswerable questions in life?   We all find out in a very short period of time.   Asking fellow humans, who have been on this earth as long as you have been, is just stupid - they really don't know either.   Oh, sure, they'll quote some Bible verse or something from whatever book sets forth their belief system - but that is just quoting answers without any analysis, and often are just answers written down by fellow humans, who are just as clueless as you are.

You don't need those intermediaries to commune with God.  Or at least that is my belief.
Newer Post Older Post Home