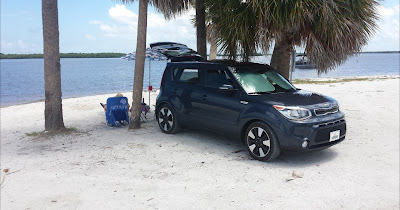 I recently changed the oil on the KIA.  I was going to take it to the local EZ-Lube but the last time I was there, they left greasy footprints on the floor mats and then decided to do a "fuel injection cleaning" on a neighboring car - which generated clouds of white smoke.  Unfortunately, they left all the windows down on my car and it smelled like smoke for weeks afterwords.  When I pointed this out to the manager, he got all pissy about it.  I stopped going there.

I had a couple of changes done at the dealer, as it was convenient to do so while the car was there for some minor recall.  But it was like $89 for a synthetic blend oil change, which is kind of high.  I use the all-synthetic as we don't drive very much and do oil changes on an annual basis.

I broke down and bought some Mobil 1 5W30 - about 15 gallons of it - as well as oil filters, and started doing my own changes.  Between the cost of the oil and the filter, it comes to about $25 a change.  Walmart even makes their own synthetic, which I suspect is probably Valvoline in bespoke packaging.  Oil changes are good - anything beyond that is style points.  And if someone tries to sell you on "Amsoil" - run away, it's a cult.

So I did the oil, changed the air filter (after 7 years it has 30,000 miles on it!) and the cabin air filter (which you should do annually - it helps eliminate old car smell).  Now I know, some would say, "Well, $89 isn't a lot of money and I have better things to do with my time!"  And maybe that is true.  Then again, I saved $64 plus the time wasted (3/4 hour) driving to the dealer and back, plus the hour or so I would have to wait at the dealer (or EZ Lube) to get the oil changed.  I have better things to do with my time as well.  And I'd rather spend $64 on myself than the car.

In addition, as the EZ-Lube example illustrates, sometimes these lube places - and even the dealers - screw things up.  I had an EZ-Lube place lose the drain plug on my 1995 F150 and try to replace it with a English-thread plug, stripping the threads and causing the truck to drip, drip, drip wherever it went.  The Ford dealer replaced that with a fug-a-jug dealie that clamped in the hole and sealed with a rubber plug - a complete oil dump waiting to happen.  Yea, it leaked, too.  I finally tapped out the hole and got a new plug and o-ring and fixed it myself.

Even the KIA dealer screws things up. The car jockey thought he was "helping" when he decided to "wash" my car with some sort of chemical paint remover.  I had just detailed the thing, too.  He pulls up, grinning like a puppy-dog and the car is soaking wet with gobs of soap all over it.  He was expecting a pat on the head, but I was pissed off.  The paint has etched water spots that are just now starting to buff out.  Sometimes it is better and cheaper to do things yourself.

So anyway, we gave the car two coats of wax which it desperately needed after our camping trip, and I cleaned the leather seats with Lexol and put the Lexol preservative on them and it smells like a leather coat store again. Nothing worse that a car with funky smells to it - it pays to keep your car clean.

I entered all this in my big ring binder where I keep all my receipts, because an asset you paid $25,000 for deserves more than some crumpled wads of receipts in the glove box. You'd be surprised how many people do that, though - they bitch and moan about the price of cars and then treat them like dirt.  It is like setting your money on fire.

Well, fast-forward three years, and Edmunds site is saying the Private Party sales value is now $19,500 or so - a $5000 jump from three years ago.  This is insane - they sell brand-new ones for not a lot more.

What the heck is going on?  Well, a number of things.  First, there is pent-up demand for cars as everyone was "locked down" due to the pandemic (Remember that?  Remember what I said about human economic memory being about 18 months at best?).  So there is higher demand for cars as people stopped buying them for two or three years.  We saw the same thing during the recession of 2008.  When the economy started to recover, car sales took off.

Next is supply.   There are shortages due to factories closing here and abroad and components factories (mostly in China) closing down due to CoVid.   We have a car port here in Brunswick, though, and the car lots are filling up rapidly with cars.  We see a LOT of KIA Souls coming off the ships. The KIA SUVs are made right here in Georgia.  So if there is a shortage, I think it is about to end shortly.

The third aspect is inflation, which has been running - they tell us - about 8% or so.  It feels more like 15% or more.  Dollar Tree is now $1.25 Tree (that's 25% inflation) and many products are being downsized or are just not in stock anymore.  This too, may change, very shortly.  Interest rates may also play a part here as well.  When we bought the car, they offered us a loan at 6% or so, as I recall, because we had "excellent" credit.  Until fairly recently, car dealers were offering zero percent interest or very low interest rates, even on used cars.  Again, that is changing as we speak - by several percentage points.

So the Edmunds data might be a little outdated.  Once again, like with so many other economic arguments, we are looking at our rear-view mirror for data.  "Statistics (from the 1960's) show that college graduates make 50% more than people who don't go to college!  Surely that has to be true today!"  But of course, not everyone went to college back then, and student loans were basically nonexistent.

Things are changing and changing rapidly.  I recounted how earlier this year several homes sold on our little island for over $700,000 - houses that would have sold for under $500,000 just three years ago.  And they sold, often for over-asking, with multiple contracts with escalation clauses, in a matter of days, sometimes hours.  That was three months ago.  One neighbor saw this happening and decided to sell their house and put it on the market.  Three weeks with no showings, and today a $30,000 price reduction.  And it isn't like it is a run-down house, either - it has all new kitchens and baths and whatnot.

It is just that the market has shifted and shifted suddenly, due to interest rates rising, rampant inflation making people nervous about buying vacation homes, and also forcing people to cut back on spending.  Both Wal-Mart and Target claim they have so much inventory that they may have to start cutting prices!  It's about time - but what took so long and by the way, why hasn't this happened yet?

But the inflated car value is just like the inflated house value.  It is nice to think your "assets" are worth a lot more money - and this does tend to raise consumer confidence and cause people to spend more, which creates a prefect feedback loop.  But the problem is, if you sell your house - or your car - where are you going to live or what are you going to drive?  Unless you are willing to rent for a few years or take a world tour, or take the bus to work or whatever, it doesn't work out for most folks.  Unless you are opting-out of the system entirely, you can't benefit from these phantom increases in market value.

Well, you could try - and people did - by taking out home-equity loans on their over-valued houses.  How did that work out?  2008 is what worked out - and many people were worked right out of their homes - they ended up being forced to rent.  So while it is nice to have "paper gains" they are nothing but paper, until you can cash in.  You can be the "richest man in the world" but if your "wealth" is measured by market cap, well, it is illusory.  You can't spend market cap.

These are crazy times we live in, where used cars go up in value.  Crazy, unstable times. Don't expect them to last.