A Sense of Purpose 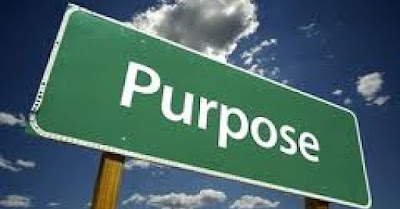 People need to have a sense of purpose, otherwise they become depressed.

When I decided to retire, almost four years ago, now, a reader wrote, saying I would become "bored" in retirement with "nothing to do" and maybe he had a point - which is one reason perhaps why I have this blog - among other activities.  The human brain and human body are designed for action and purpose.  And life without purpose and action is a life unlived.

This is why cockamamie ideas like "guaranteed annual income" or whatever are bad for the human soul.  Go to any government housing project such as the "Homes" on MLK boulevard - or any other place where human beings are being warehoused - and you will see a lot of bored and aimless people - unhappy people who often get into legal trouble simply because it is something to do.   Being a gang-banger seems like an odd career choice, until you realize it is at least a career choice, even if destructive to the soul and society at large.   People want to have a purpose.

This may be why some retirees do end up lonely and depressed - and why the suicide rate isn't highest among bored teens but among older men.   Once they quit their jobs and careers, they feel useless and worthless and decide to check out.  Women traditionally had more domestic roles - when their husband retires, they still have to work - often twice as hard with a cranky husband at home.  Maybe when the legions of working women start to retire, we'll see an equalization in suicide rates.  Progress!

But seriously, you have to keep busy if you want to retire.  It isn't that you stop working when you retire, but you just stop getting paid to work.   Many older people take up hobbies - woodworking, gardening, restoring an old car, trying to maintain the perfect lawn.   Others travel (as we do) and explore their world in the few years they have left in it.  Still others take on part-time jobs, either working for money or volunteering for some good cause.

The worst thing to do is nothing.  And yet I see a lot of older people fall into this trap - sitting around the house, watching Fox News and getting angry at the world - and unable to do anything about it.  These are very depressed people - and there are a lot of them around.  Don't add to the problem, if you can.

It is funny, but I read these online comics and one common theme is the mental illnesses of the authors.  Everyone is struggling with depression, it seems.  And when they are depressed, they lay in bed for days at a time, feeling like doing nothing at all.  And you have to wonder whether doing nothing isn't what causes the depression, not vice-versa.  Or perhaps laying about just exacerbates the depression and makes it chronic.

What got me started on this was a small argument I had with Mr. See.  When we go away for the summer, we have to close up the house, which involves a lot of cleaning and putting away of things - patio furniture, the hot tub, the golf cart, and so on and so forth.   I mentioned to Mark that I wanted to clean off the front porch while he was at a pottery class.  "Don't do that!" he said, "I want to clean the rocking chairs, first!" - as if hosing down a $99 rocking chair was beyond my skill set.

So I sat around and did nothing - paralyzed by these rocking chairs that apparently had to be wiped a certain way.  I finally realized Mr. See was being ridiculous - and controlling.  We are leaving in a week, and don't have time to wait for him to do special rocking chair cleaning.   So I cleaned off the front porch and put things away.  It isn't rocket science.

But it struck me that it wasn't Mr. See being obstinate about something stupid - we all do that on occasion - but how I felt in response - helpless, useless, and purposeless.   And I see this happen to a lot of older men, particularly when they start to slide down the hill toward dementia.  The wife, trying to be helpful, takes away more and more responsibilities from them - as if they were a small child.  The husband feel useless and helpless and gets angry.   And it happens the other way around as well - wives stripped of their few duties by "helpful" husbands, to the point where they have nothing to do.  Depression sets in.

I noted before this was (and maybe still is) a problem for many suburban middle-class housewives back in the day.  They hire a maid to clean the house, a lawn service to mow the lawn and then have their groceries delivered.  They have nothing to do except sit around all day, watching television.  It is a recipe for depression.  It is a recipe for learned helplessness.

So, maybe our reader was right.  Retirement can be a trap, if you let it be one.  The idea that sitting around doing nothing is an irrational idea and one that leads to sadness.   It pays to have a plan of something to do, whether it is a hobby or even a part-time job.

And I have thought of the latter, sometimes, and I can't say I would write-off the possibility entirely.  However, with our travel schedule, it is hard to do, and what's more, with the Great Recession underway, I suspect the "labor shortage" is about to resolve itself in a big way - and not a good way.

Sadly, this may mean more people will be laid off, and unemployment benefits extended and yet legions of more people with no purpose in life.

And that is sad.  Literally sad.