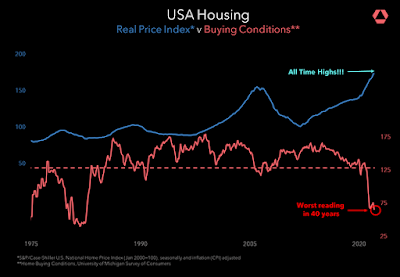 It's a really shitty time to buy a house.  Good news: It's about to get a lot better.

I'm calling it - the bubble has burst or is about to very, very shortly.  Only a month or so ago, we saw houses hitting the market in our neighborhood for $700,000 and selling in a matter of days.  These are houses that two years ago, would sell for under $500,000 or even under $400,000.  This is a ridiculous amount of appreciation and always the sign of a bubble.

Needless to say, these recent sales are the talk of the town and everyone is saying the same thing they said back in 2007 or so.  "I'd like to sell, but then where would I go?  Everything else is just as expensive!"  Unless you have the correct timing to sell at the peak and then rent for a year or two, or decide to take a round-the-world trip or go RVing "full time" you are selling an overpriced house just to move to another overpriced house - you are not coming out ahead.

Some are putting their houses on the market to "test the waters" - they figure, "Why not list it for a ridiculous price and see if there are any takers?"  Those houses haven't sold - or even had offers.   Houses are not being sold before they hit the market anymore - they are not selling in the first week or hours.  They are staying on the market for weeks with no takers.

Now, in a normal market, a house sitting unsold for weeks or months is nothing to be alarmed about. But when you have an overheated market where houses are being sold within hours of listing, and then suddenly it drops, you have to wonder why.  It was getting to the point where desperate home buyers were sending out letters to everyone on the island asking if they wanted to sell.  Those letters have stopped. 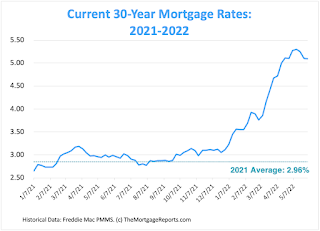 Mortgage rates have doubled in the last year, skyrocketing in just recent months.

Interest rates are one.  Mortgage rates have jumped from under 3% to close to 6% in a matter of months - and likely will go higher.  I have explained this time and time again - the see-saw of housing prices and interest rates (and taxes and insurance).  If you want to borrow $500,000 on a 30-year fixed loan, the monthly payment will be about $2100 at 3% interest.

At 6% interest, that $2100 a month only buys about $350,000 worth of house.  Whoa, Nelly!  Some folks are going to be seriously upside-down on houses in the coming months.  Where we live, it isn't such an issue.  These are retirees who are cashing out of their homes and often making all-cash offers or putting down more than 50%.  Some are investors who have to invest money from Starker deferred exchanges, or with fixed loan rates, still make money from vacation rentals.  If they had to sell, however, they might be screwed.

People in their working years, on the other hand, will really feel the bite.  If they paid $500,000 for a house (not hard to do in places like Northern Virginia) because 1/3 of their income amounted to $2100 a month, they may find it hard to sell the house if they had to move, unless the buyer made significantly more money than they do.   They will be "upside-down" on their suburban tract home to the tune of $150,000 - far more than their down payment.  This shit will get really ugly and fast.

Welcome to 2008.  Same high gas prices, same real estate bubble, same wall street shenanigans.  Only this time around, there is a Democrat in the White House - will he be able to hold on, or will people blame him for the recession and switch parties?  Stay tuned.

Taxes and insurance rates will play a part as well - as they did back in 2008.  I just got my assessment and even with a "homestead" exemption, my assessed value went up by over $30,000 or about 15% of the assessed price (which is not the same as fair market value).  So I can expect a 15% tax hike this fall when the taxes are due - from $2800 to $3220.  Not enough to break me, but just another increase along with everything else.  Insurance is up as well - one neighbor reported a 100% increase in premiums, forcing them to switch carriers.  The roofing nightmare in Florida (which DeSantis seems to be willing to do nothing about - I guess we know who is paying him!) is causing insurance rates to skyrocket.

Add in the overall inflation and people have less money to spend.  I noted before it will take a few more weeks before people realize they are burning through their savings and running up their credit cards.  Belts will be tightened shortly.  Maybe it means a few less restaurant meals.  Maybe it means putting off buying a new car for another year.  Each of these decisions means one less employee at a restaurant or car dealer or car factory.  The vaunted "labor shortage" is about to resolve itself in short order (the labor shortage of the 1990's evaporated quickly as well).

As people get laid off, it will get ugly quickly.

What will it take to turn things around?  Well, it is the same recipe we saw when Obama took office.  New regulations reining in the excesses of Wall Street will be re-re-enacted.  These have been installed after every recession since 1929 (My Grandfather had a hand in enacting those reforms) and then repealed by subsequent Republican administrations on the ground they were fettering businesses too much.  Wash.  Rinse. Repeat.  We never learn, do we?

We are particularly screwed this time around as we have already thrown money at the markets, not because we were in recession, but because Trump wanted to "goose" the GDP to 6% instead of the slow-growth 3% or so during the Obama years.  Then came the pandemic - and we threw easy money on the fire of debt.  Much of this went out in "forgivable" PPP loans, although to hear Republicans tell it, it was all "stimulus" money given to poor people, which is their code-word for the N-word.

As in every other recession, the rich will make money, for the most part.  A few will go belly-up - those who were financially stressed or have wildly over-valued stock prices.  Like I said, Musk could go from richest man in the world to homeless, overnight, if people stop buying Teslas and NASA stops buying launches.  One rocket crash is all it would take.

But the people who will really get hurt are the middle-class.  The family who just bought a house at the highest price ever paid in the neighborhood will have to live there a long, long time in order to make their money back.  Unless interest rates drop again to below 3% it is unlikely we'll see these housing prices for 5-10 years.  I say this as that is how long it took for our house to be worth what we paid for it back in 2008.  Hell, we had people still "upside-down" from the last recession, only last year or so!  If they didn't sell now, odds are, they may end up back "underwater" again - particularly if they borrowed against their newfound equity.

It will be interesting.  The good news is, that housing prices may become more "affordable" but since interest rates are higher, the net monthly cost to homebuyers may be the same.  Cash buyers and investors will have a field day - as they did in 2010 with all the foreclosures.  The rich get richer....

Eventually things will get better, but government policy may determine how quickly things turn around and whether the recovery is sustainable.   I worry that if Trump is re-elected, we will see more rounds of tax cuts for the wealthy and more deficit spending, which in turn will make dollars worth even less.  Of course, the same thing could happen under a Democratic Presidency. Like I said, it will be interesting if not frightening.

On a personal note, what can one do to survive a recession?   Well, it is the same old things we've talked about before - pay down debts and invest in a panoply of things.  The folks who will get hurt the most are the same sort of folks who got burned in 2008 - people who bought more house than they could realistically afford, leased cars, and ran up credit card debts.  People who invested in "hot stock tips!" and other hyped investments.  NFTs and Crypto will likely take a hit, along with a lot of sketchy stocks for companies that are little more than websites.

But then again, it isn't like we didn't see this coming...

UPDATE:  Reuters gleefully reports an "upturn" in credit card borrowing!  Good news for the banks!  Now they can make money on interest!  What is not said is that consumers are finally tapped out and starting to carry a balance again.  They will start to realize that higher prices are not affordable and have to cut back on spending - less restaurant meals, driving more slowly, buying less crap.  This will have a snowball effect.

And no, Reuters, borrowing money with credit cards is never good news.