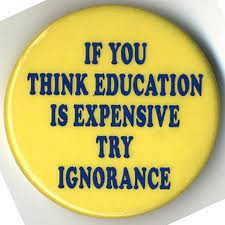 For many, ignorance is bliss, until they get the bill.

A lot of people in America tend to view "actually knowing something" as something only lowly tradespeople do.  You know how to make a latte with a leaf in the foam - you can work for Starbucks at minimum wage.  But as a customer - who can't even boil water without setting the stove on fire - you are better than that!  No messy getting your hands dirty!

And so on down the line.  The car mechanic is considered "beneath" the office worker, who knows little more than how to attend meetings and watch powerpoint presentations (the making of which, of course, is beneath them - some underling handles that!).   How their smart phone works is a mystery - but hey, they can afford to upgrade to the latest and greatest every two years with a "bundled" plan, right?

It seems we have a nation of rich idiots - or people who think they are rich, but are just middle-class folks with a bad attitude - narcissism.  And maybe this comes from insecurity.  Let's face it, there are a lot of people who are paid a lot of money to work at "jobs" where they really are unnecessary to the operation of the company.

But in the long run, ignorance is not strength, nor is it very profitable.  The less you know about a subject, the worse off you are in the marketplace.  And this is true for all levels of income and social status.  For the very poor, it means being very much poorer.  For the middle-class, it means sliding down the economic ladder while surrounded by bling.  Even for the very, very rich, it often means a trip to bankruptcy court, as they fail to appreciate that "a lot of money" can disappear quickly when spent very fast.

It's easy to pick on the poor for signing up for ignorant deals like payday loans or buy-here-pay-here used cars or rent-to-own furniture or rent-to-own bling rims or whatever shitty deal they are pushing on the poor this week.  Lottery tickets, for example.  Poor people, by and large, are not very smart people, but worse yet, are poorly educated in poor schools.  You look at States with poor educational levels and you see more people in poverty.  And yes, some forces in the world want to see things this way - after all, you can't sell a payday loan to someone who understands compound interest, can you?   Teaching that would be worse than Critical Race Theory!   Actually, if you think about it, they are related.   Onerous debt instruments have been used to exploit minorities since the dawn of our country.

But the middle-class has no such excuse, right?  After all, they are smarter, go to better schools, and are better educated - right?  Maybe they were, but something has changed.  When I grew up, my parents were always quick to point out raw deals and scams, as they had been educated about these things, perhaps first in school, and then in the school of hard knocks.  Their primary education was surviving the Great Depression - they knew firsthand how it could all go away in a heartbeat.  They were skeptical of anything that sounded too-good-to-be-true.

Today?  Not so much.  I get e-mails (or used to) from people telling me that leasing a car is a swell deal - you get more car for the money!   And perhaps most of those comments were from shills for the leasing industry.  We didn't have "influencers" so much in 1960, except perhaps for people on television.  And back then, the didn't promote as many raw deals, other than smoking, perhaps.

But it strikes me that ignorance is a very expensive hobby these days - particularly in a world dominated by technology.  In America as well as most of the Western world (and even in developing nations) you have to own at least some technology to even survive.  It may sound dramatic, but it is very hard to get a job without a cell phone these days.  You need a call-back number, an e-mail address, a number you can be texted to, and maybe even an "app" to download for the job application.  Some jobs even require (or prefer) if you use your personal cell phone for work.

This is why we have the so-called "Obamaphone" and why you see "homeless" people texting.  Without the "luxury" of a cell phone, they can't get a job, apply for government benefits, or communicate with anyone.

We are a nation of 330 million people and 276 million cars - or more than one car for each driving-age person in America.  We are also a nation of 390 million guns - not that everyone needs or has a gun (indeed, gun ownership per capita has declined since I was a kid) but that some folks feel the need to own several of them or even dozens.   But getting back to cars, it is essential to own some sort of car in many parts of the country, to get to work, to get to the store - to get anywhere.  Our society is structured so that people live miles apart, and miles apart from work or shopping.

Our homes have become more complex as well.  A typical American home - even for someone living "at the poverty line" has a refrigerator, a microwave, a stove, air conditioning, a hot water heater - as well as other appliances.  And all of these things have gotten more complex (and expensive) over time as technology improves.

If you don't understand how these things work, you are perpetually at a disadvantage when it comes time to buy anew or have something repaired - or even know if it is worth repairing.  If you can't figure out how to keep viruses off your phone or your computer, you will end up spending a lot of time and money at "the genius bar" - that is, if you are ignorant enough to pay 10x the money for an Apple product so you can have "peace of mind."

Peace of mind - the ultimate scam.  You can't sell it, you can't buy it - but every merchant offers it.  "Buy this extended warranty and have peace of mind!" - and insure the least likely time for any component to fail.  It illustrates how we are afraid of our own technology because we don't understand it.  We buy complex tech and then live in fear of it breaking.  Maybe a better idea is to not buy technology you can't afford to walk away from, if it breaks bad down the road.  Less may be more.

The problem, of course, is that technology keeps getting more complex, and we as humans stop learning at some point.  We bought an a "Class-C" motorhome in the late 1990's and went on a trip. We stopped for gas and after we left, the "check engine" light came on. It seemed the RV wasn't running right so I stopped at an auto parts store and replaced the spark plugs and wires and distributor cap (why, I am still not sure).  The "check engine" light was still on.  What gives?

I figured it out the next time we stopped for gas - I had forgotten to put the gas cap back on!   Turns out that vehicles made after 1995 or so have a sensor that detects leaks in the evaporative emissions system (itself a technology instituted in 1973 or so) that recycles gas fumes from the gas tank.   Leave the gas cap off, and the system thinks there is one helluva leak!

That was then.  At least I wasn't the only one to fall into this tech trap.   I read online, sob stories from people who paid hundreds of dollars to have their car towed to the dealer, fearing major engine damage, only to be told their gas cap was loose!  It wasn't like this was announced in the papers or anything - the learning curve was steep - and expensive!

Years later, they have a separate light in some cars (or a message) telling you to "check gas cap" or there are instructions on the fuel filler door about the possibility of the CE light going off if the gas cap isn't tightened.  I tend to run mine three clicks to be sure.  The F150 has a capless system - you just jam the nozzle in the hole and pump.   It took a lot of pissed-off people to enact these changes.

I went back to school, so to speak and got a OBD-II code reader (and today, laptop interface) and tried to learn about emissions systems and devices.  There was a lot to learn - I had to ditch my carburetor-era education and embrace the future.  And no one likes change.  But I realized that a lot of this fancy new tech was actually better than the old school designs.  More reliable and more efficient and longer-lasting - provided you knew how these things worked and didn't try to apply old-school tools and techniques to modern technology.

Of course, it could be worse.  I recall the guy at Carrier who bought a new Monte Carlo and when it wouldn't start one day, went under the hood and started tearing out wires, convinced that "all this pollution control stuff" was causing the problem.   Of course, at that point, the car would not run at all, and it had to be towed to the dealer for repair - at his expense, even though it was still under warranty.

Ignorance isn't bliss - it is pain, most of the time.  And it gets expensive - fast.