Should You Open a PayDay Loan Store? 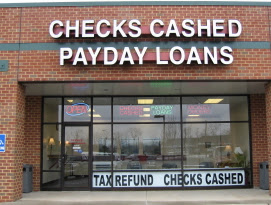 Is running a payday loan store a lucrative business or a marginal one?

A reader writes (perhaps sarcastically) that after reading my blog, he has decided to open a payday loan store or other business that exploits the poor.   After all, he reasons, these places do make a lot of money, and the poor seems to have an insatiable appetite for shitty deals.

I told him to go for it.   While I would have moral issues running such a place (I am too much of a softy to screw people that badly) others clearly do not.   But on the whole, the poor are not these sainted people that the folks at NPR like to make them out to be.  And no, they don't have mystical powers like Hollywood makes them out to be (e.g., The Green Mile et al, where poor folks are naturally thought to be more in touch with their spiritual side than money-grubbing rich folks.  Such is not the truth).

The real truth about the poor - or at least as much of the poor as of the rich - is that given the opportunity, they will steal from you as much as you'd like to steal from them - often literally.   The poor are more likely to break into your house, not to steal a loaf of bread to feed their starving children, but as happened on our island, to steal your television to pawn for drug money.   These are not nice folks.

And the poor are far more likely than the rich to assault you or even kill you, either in an attempt to rob you, or because they don't like your race, you politics, or your sexual orientation.   These are often belligerent and violent people.

And while we like to posit that the poor are "dumb" they are often very astute when it comes to working the system for free things (disability, welfare, food stamps, whatever) and also working the law.   It is surprising how much "jailhouse law" the poor learn, knowing exactly what their rights are, and working them to their advantage.

For example, a landlord relates to me how he rented to a family who seemed very nice when they were looking at the property, but had some excuse why they could not pay a deposit and first month's rent.  He foolishly rented to them.  They never paid rent and instead of evicting right away, he listened to one sob story after another and let it drag on for nearly a year.  At one point he actually offered them money to leave as they claimed they could not move out without money for a deposit on a new place.  They took the money, of course, and didn't move.   He finally evicted them, and hours before the Sheriff arrived, they had moved out, taking all the appliances, hot water heater, and furnace with them.   They were shrewd people and knew the law down to the letter.

Thankfully, I never fell for such a scam, but I have seen many do.   The poor aren't dumb, and they aren't all saints and wonderful people, although as I have noted, some are genuinely decent people who work hard, but are just not very bright.

But the guy with the cardboard sign at the street corner?  He is not a nice person, and you will realize this the first time you offer him food instead of money in response to his "Hungry, please help!" sign.  He will curse you out and threaten you.   He is a drug addict, not one of the noble poor.

I have no problem with the reader wanting to open up a shop that exploits the poor.   If he doesn't, someone else will.  And in fact, someone else likely has already done so.  And that, in a nutshell, is the problem.

When you are last into the marketplace, you may be the first to fail when conditions change.  And conditions for payday loan shops may change in the near future.  Our new consumer protection agency is going after a lot of shady operators, and we can expect to see a lot more legislation and regulation on both a national and local level to rein in such businesses.

Even Republicans are getting a little tired of payday loan operators.   Many are pushing for limiting these places and also placing them out of bounds of military bases, as many young men in the military are ending up in financial trouble due to payday loans and other raw deals.  When the GOP thinks you've taken caveat emptor too far, you might be in trouble.

So, the glory days of running a payday loan shop may be coming to a close.   Those already in business, who are well-financed, might be able to weather the storm by offering more creative deals or by cutting their margins to comply with new regulations

The new guy who is leveraged to the hilt starting his business, however, may find himself over-leveraged.

And many of these shops won't like competition.   And I suspect more than a few are affiliated with organized (or disorganized) crime.  So if you open up a payday loan shop across the street from an existing payday loan shop, and offer lower interest rates, you may find a horse head in your bed.  Just saying.  You lie down with the dogs, you get up with fleas.

There is one other problem.   People are starting to wise up about a lot of these raw deals.  Two "for profit" colleges (or universities) have already declared bankruptcy in recent months, and a couple more look to be headed for trouble.   The problem they are having is that word is getting around that these are raw deals as folks figure out that no big-paying jobs are forthcoming after graduation.   Of course, increased regulation and litigation isn't helping either.  But a lot of the poor, as I noted, are pretty astute folks when it comes to "working the system" and eventually word-of-mouth gets around, and people may stop patronizing these shady businesses.

Maybe.  On the other hand, historically, such businesses have flourished for over 100 years.  In Thomas Wolfe's Look Homeward Angel, he describes loan businesses in Asheville, NC, back in the 1920's that exploited the poor in the same way as payday loans do today.  Not much has changed over time.

But even assuming all of this can be worked out, you have to find a market that is not already saturated.  In our depressed little "city" of Brunswick, the payday loan places and title pawn shops are chock-a-block next to the buy-here-pay-here used car dealers and rent-to-own rim shops at the corner of "Community" boulevard and MLK drive.  Whether there is room for one more is anyone's guess.  And some have gone out of business in the past.    Just like storage lockers, they can be a license to print money, yet some have gone belly-up when they locate in the wrong place.  Like any business, there is still risk involved.

So, dear reader, go for the gusto.   Just remember that any business requires a lot of capital to start, a lot of money to run, and a lot of hard work to make successful - even a shady business with high margins (ask you local drug dealer, if you doubt this).   And even if you do all that, you can still fail miserably at it.   One reason these payday loan places do charge so much interest is that about half of all their customers either default on the loans and/or declare bankruptcy, and you might find it hard to collect on a lot of bad debt.

Frankly, I think there are easier ways to make money, that are less exploitative of the poor.

And it goes without saying that if you fail at such a business - or even succeed - you are not going to get much sympathy from folks!
Newer Post Older Post Home