I used to visit Snopes once a day to see what the latest rumors were.  Now I have an easier system.

UPDATE:  Apparently even Snopes is getting tired of having to debunk 20-30 rumors a day spread by social media.  They now have a page devoted to "how to spot fake news" because people are so stupid they can't tell the difference.

Over the years, I have relied on www.snopes.com to figure out if something was true or not on the Internet or in the news.  It was, back then, the "urban legends reference page".

But in the last year or so, something weird has happened - not to Snopes - but to the Internet.  On any given day, you can go on Snopes and find five, six, or even seven new urban legend "sightings" per day.

What the heck is going on?

Social media is what is going on - the sewer of the internet, full of mis-truths, half-truths, and outright lies, along with made-up stories, clickbait, and fake news.   It is all designed to get you riled up, to get you to click, or whatever.

So, to save you a lot of time, I have compiled a Snopes Digest.  In one page you can determine whether or not an Internet rumor is true or not:

1.  Did you see it on Facebook?   Then it was fake.   Other than pictures of the last meal your ate, or your dog, or your kid, everything on facebook is fake.  The latest political outrage?  Fake.  Famous quotes from our forefathers or Albert Einstein?  Fake.   The latest outrageous news story?  Fake.   Police officers or servicemen "refused service" at a convenience store or restaurant?  Fake.   Nothing - nothing at all - on Facebook is real or reliable.  Using it as a news source is a dangerous thing to do. 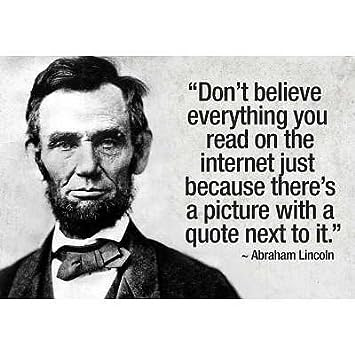 Abraham Lincoln was wrong.  Don't believe any quote you see on the Internet that is attached to a picture.  They are all invariably fake.

2.  Was it on Twitter?  Odds are it's fake, too.   Either the twitter account was hacked and someone is posting nonsense, or someone has created a fake twitter account with a sound-alike name.   There is nothing - nothing at all - worth getting worked up over on twitter.   You are just better off not using it. The signal-to-noise ratio is about 1 to 1 - for every "true" thing on twitter, you are going to read one false thing.   And most of the "true" things are just banal inanities.

Twitter is like texting - it is akin to passing notes in class in the 7th grade.   Grow up, for chrissakes.   No one wants to hear the latest gossip other than immature people.   No one wants to hear your opinions, minute-by-minute on events as they happen.   And what we learn about events as they happen is usually the most unreliable information of all.

3.  Was it on Reddit?   Reddit is supposed to be "the front page of the Internet" - whatever that means.   What it really is, is a glorified anonymous Facebook, where pictures of people's cats competes with fake news and doctored photos and "reposts" that appear over and over again.   Due to its "upvoting" system, the absolute dregs float to the top of that septic tank, while hard data is downvoted to oblivion.   Since most of the "voting" is done by people who are internet-addicted (young kids and gamers) the most idiotic stuff ends up on top - stuff you'd expect fascinates an 18-year-old tech geek who likes to play video games and dress up as Batman.

Inaccurate stuff appears on Reddit all the time, and then people compete to see who can make the most witty comments (and by witty, I mean on a high-school scale).   If someone posts, "Oh, by the way, this photo was shown to be fake about a year ago) that comment is downvoted to the bottom of the page.   The end result is an "internet circle-jerk" where people continue to post witty comments or act outraged (if that is the expected response by the troll who put up the link in the first place) over and over, for days.


4.  Was it on Website You Never Heard of?  There are tons of fake news sites out there these days, and then others who claim to be real, but are just political blogs that spread rumors or exaggerate the hell out of things.  These sorts of "sources" like Beritbart or The Daily Current are just not reliable, period.   Sadly, even The Washington Post and The New York Times (and it goes without saying, Murdoch's Wall Street Journal) are resorting to click-bait to gain "readers" these days.


5.  Does it have a clickbait headline?   "You'll never believe...."  or "The 10 best" (or worst) or "Banks hate him!" or other come-on nonsense that requires you to click on the link in order to find out - and even then, you have to click on ten more slideshow links in order to find out what the headline promised.  This is not "news" nor is it accurate.   The best you could say is that things like "the 10 greatest muscle cars of all time!" is merely subjective opinion.   The worst is, well, it is just lies.


Sadly, what this means is that most of what you read on the Internet is simply untrue.   And that leaves us in a conundrum - where do you get hard data to perceive the world as it actually is?   When The Daily Show and The Onion have more relevant information that the "paper of record" does, it make you wonder - how did we get to this place?

There are, however, ways to vet real news from fake.   And this responsibility begins and ends with YOU.   NEVER, ever, ever! just re-post or "like" or forward a piece of "news" that you have not vetted yourself.   Don't assume that just because someone you know sent you a link or a story, that it is indeed true.

Google it.   Does it appear in other news sites - you know, the real kind?   Even if so, do they reference anything other than the original story on a sketchy site?

Is there hard data in the story - names, dates, and so on?   So much of these fake shit is supposed to have happened "just last week" or "yesterday" which are ambiguous terms that never date a story.  Names and locations are not given, or are made ambiguous.

The problem with fake news isn't the people creating it, it is the idiots who spread it.   And this in regard, your second responsibility is to ridicule and shame those who spread such stories.   Yea, I know, these are your friends.    Educate them to be more skeptical or find new friends.   Hanging out with people who believe in UFOs or Sarah Palin will inevitably cause you a world of woe.