The Mindless Selloff of 2016 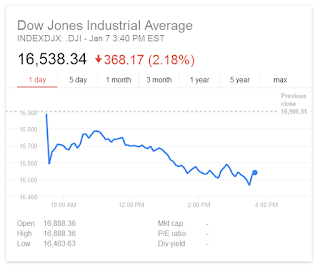 People are panicking about the Chinese Stock Market - Why?

2016 has only just stared, but it has been a rough ride.  People are panicking about the Chinese stock market, which itself is in a panic.  One problem has been their government policies - closing down the market if it drops by 7%.   This, in turn, causes people to panic further and say "Sell! Sell! Sell! before the market is shut down again!"

And that in turn causes the "circuit breaker" to trip yet again, driving more panic.   Perhaps if they set their limit higher or just let the market free-fall, eventually some smart person would say, "Gee, these stocks are under-priced, and are good bargains!" and the free-fall eventually stops, and recovery begins.

Why this is affecting the US market as much as it has is a good question.  No doubt fear is a big factor, and no doubt a number of Chinese have money invested here as well, and want to get out.

Should you get out of the market?  Sell before it is too late?   Well, again, since we don't have a time machine that works, we can't go back and sell in December, before things started going South.   And since we can't jump ahead in time, we can't figure out where the market will bottom out and when we should be buying.

You see, in retrospect, the smartest thing to do in 2009 would have been to buy, buy, buy stocks in March of that year, when they were at their nadir.   You would have easily doubled or tripled your money.   I bought Avis for 74 cents back then - today it is worth 5000% more.   But we don't have a working time machine.

So the next best thing to do is to hang on, and if you have money, look for under-priced bargains and the buy while prices are low.  Because one thing we've learned from every recession and depression is that the economy always recovers, and stock prices go back up (other than for companies that go bankrupt).   Buying high and selling low is never a good strategy.

A reader sent me this article from Vanguard, about human behavior and investing.  This question and answer really jumped out at me:

Q: Which of our behavioral biases do the most damage to our financial well-being?

There are many failings that get us into trouble financially, as I describe in Misbehaving, so let me focus on just two.

The first is loss aversion. Losses have about twice the emotional impact of an equivalent gain. Fear of losses (and a tendency toward short-term thinking—I'm sneaking in a third one here) can inhibit appropriate risk-taking

For example, investing in the stock market has historically provided much higher returns than investing in bonds or savings accounts, but stock prices fluctuate more, producing a greater risk of losses. Loss aversion can prevent investors from taking advantage of the long-term opportunities in stocks.

The second bias that causes a lot of trouble is overconfidence. Most people think they are above-average investors, and as a result they trade too much and diversify too little. Overconfidence can also lead people to invest during what appears to be a bubble, thinking they will just get out faster than others. Research shows that the more individuals trade, the lower their returns. Not surprisingly, men suffer from this problem more than women.

This is one of the many reasons why it would be better if we had more women as portfolio managers.

In other words, people - men in particular - tend to over-manage their portfolios, over-trade, and panic-sell and greed-buy.   We buy stocks we hear are "going places" long after they have already gone up in price.   Then, when they tank, we panic and sell them "before it is too late".

I looked at some of my stocks today.  Overall, they are down the most of my portfolio (which is why it is good to be diversified - bonds, real estate, and insurance are holding steady) about 10% or so.   Some of the prices, however, simply do not make much sense.    With lower prices, the effective dividend yields are starting to climb.   One stock has a yield at current prices, of over 8%.  There are some bargains to be had out there, or will be, in the next few weeks.

Rather than see this as a cataclysm, this should be seen as an opportunity.
But we tend to do the opposite, and that can cause a world of woe.   During the 2009 crises, when the market lost nearly 1/3 of its value, I met old people here on the island who decided to "sell it all!" before it went down to nothing, which of course it did not.  In fact, their instincts were fatal.  They hung on and rode it all the way down, and then, at the nadir, decided to sell.   Prices went up the next day.

They put their money into bonds (which went nowhere) or into Gold (which had already gone up, and didn't go up much further, and then fell back).   If they had just stayed put and waited a year or two, most of their losses would have been made back.   By today, they would have more than double what they had in the market back then.
By selling out, they locked-in their losses.

This is not to say you should never sell a stock.  If you need the money to live on, then you sell it, hopefully after holding it for years and after the price has gone up over time (and after you've been cashing years of dividend checks).   But to buy and sell, month-by-month, is a sure-fire way to go broke.

Unless you have a working time machine.

As I noted in an earlier posting, 2016 could be a good year for the US.  Cheap oil will drive our economy, and a crises in China only means more cheap goods and parts for us - which will be even cheaper, thanks to a strong dollar.   The negative impacts of a financial crises in China are far overstated - for the rest of the world.   The Chinese are in trouble, to be sure.   But bear in mind that we didn't even recognize the country existed, for much of the 20th Century, and somehow, the world economy did OK.

Sell-offs like this are just mindless panic.   And in the next few weeks, it may be a good time for smart investors to buy, at rock-bottoms prices.
Newer Post Older Post Home