Carrot and Stick and Obamacare 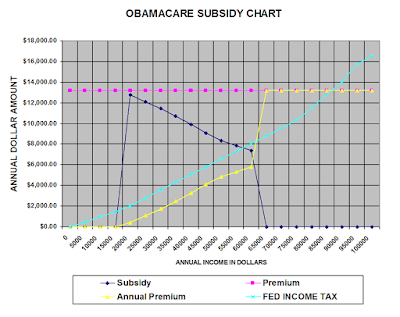 This chart, illustrating Obamacare subsidies, is rather scary.  Click to enlarge.


A reader recently sent me a link to a story about a guy who decided he was going to avoid paying $2900 a year for Obamacare and pay the $1800 penalty instead.  In his mind, it was a "smart choice" as the high deductible for Obamacare wouldn't "cover anything at all" so why bother?

(Note, see this ACA PENALTY CALCULATOR for more information about the penalty.  $1800 seems a little high at first, but when you add in dependents, the penalty can easily top $2000).

His math is, of course, more than a little off.   To begin with, you don't get "nothing" with a $2900 a year Obamacare plan.   All basic preventative medicine office visits are free, as are colonoscopies and other preventative medical procedures that could cost thousands of dollars if you are uninsured.

Moreover, if you do need an office visit or a prescription that is not free, you may only have to pay only a co-pay or a subsidized amount.

And even if not covered at all, the charges you pay for services are the pre-negotiated prices that the insurance companies pay, which is often 50% less than retail prices at a hospital.

For example, the "retail price" of a colonoscopy is about $3000 to $4000, but with my old "legacy" $10,000 deductible Blue Cross plan, I paid only $1800 or so, as that is the negotiated  price that Blue Cross would have paid had it is exceeded my deductible for the year.   The discount pricing alone is a good reason to get health insurance.

Of course, with Obamacare, the procedure is now free, but the same logic applies to other procedures which are not free under Obamacare.

But I am sure you know the drill - another "paycheck to paycheck" consumer who cannot afford $250 a month for health insurance, but can cough up his tax refund on April 15th to pay the penalty - and not see the overall cost of the transaction is killing him.

Myself, I am not happy about the new premiums for Obamacare, having made my first $1098 premium payment this month.  It is a staggering increase from $368 the month before.   But I will give it a shot and see what happens for a year.   Mark, turning 50, is due for a colonoscopy, which as I noted, would cost about $1800 at insurance rate prices.   With the Obamacare it is free, as are our office visits.   So it does cost a lot more, but we are getting more as well.

But wait, it gets better.  Depending on your income, you can receive a tax credit which can offset a lot of the expense of your health insurance.  If I can keep my income below $62,000 a year or so (which isn't hard to do these days!) I can qualify for a generous tax credit.   In fact, if my income in 2016 mirrors that in 2015, I could easily end up paying no taxes at all.   In other words my payment to Blue Cross replaces my payment to the Department of the Treasury.  I could receive a credit of $600 to $900 a month toward that $1100 health insurance bill.

In fact, I may have been a fool to keep my "legacy" plan as long as I did, as I could have ended up paying less for Obamacare than I did for my $10,000 deductible plan!

But that is one problem with Obamacare - it is hard to see the overall costs for the average consumer, unless your income is very regular.   So the amount of payment may be very scary - or it may be free - but the actual cost to the end consumer is not very transparent.

But to pay the penalty?   Even if it is "less" than the cost of premiums, even a few office visits for an uninsured person could make it a break-even proposition.   And if you have even one hospital visit, it could end up costing you tens of thousands of dollars - and even bankrupt you.

And that would be sad, medical bankruptcies in this era of Obamacare.

The above chart was prepared using data from the Kaiser website.  The data appears to be correct, as the $1100 quoted for a couple aged 50 and 55 is close to the $1098 I am presently paying under Obamacare with Blue Cross.   What is interesting (and scary) is that the subsidy for premiums begins at about $16,500 in income.  Below that level, you don't qualify, but would be forced to go on medicaid, if you qualify for that (and if your State, like mine, did not expand Medicaid, well, you're fucked proper).

As you can see in the chart, at that income level, your premium is nearly zero.  And as your income goes up, the subsidy (dark blue line) drops off linearly, and your effective net cost (yellow line) goes up linearly as well.

As you can see, all hell breaks loose once you start making more than $65,000 in combined income ($63,720 seems to be the actual cutoff).   Once you go beyond this point, your subsidy immediately drops to zero and your effective premium goes to $13,200 a year.

So, when the boss asks you to work overtime, and your income is just topping $60K a year, you might be inclined to say "no thanks" as you will lose seven grand in tax credits for doing so.  This is an utterly idiotic result that makes no sense whatsoever.

Of course, for the middle class (slightly upper middle class) it gets worse.  At $75,300 you enter the 25% tax bracket, so your marginal income is taxed at a rate 10% higher than your income below that level.   So if you make around 80 grand a year, you are really getting fucked proper.   For each additional dollar you make, you are getting slammed.   Between $63,720 and $71,110 you end up with less money to take home as you lose the Obamacare subsidy due to the "cliff".   People making less money than you have more take-home pay.

Today, you either have to make hundreds of thousands, or keep below this $63,720 limit.

Now you may ask why this happened.   In some States, this is less of a problem, as health care premiums are less.   In other States, such as Georgia, where I live, premiums are very high.   I think the architects of this act didn't believe premiums would be so high, and didn't anticipate this "cutoff" cliff would be created.

Another factor, of course, is that the upper middle-class has access to a lot more deductions, such as IRA, home mortgage interest, and things like depreciation (if they bought an investment property, for example).  People in this bracket can also afford tax advisers, accountants, and the like.

Still, though, this cliff seems kind of unfair.   And if I was basing my subsidy on my 2014 income,  I would be royally screwed.   Today, I will keep a close eye on my income, and if it shows signs of going over this $63,720 limit, you can bet I will close down shop, take a vacation, or "forget" to invoice my clients until the first of the next year.

Yes, these are the kind of unintended consequences that occur when you screw around with the tax code, particularly when you do it badly as is the case here, with a tax "cliff".

Tax "cliffs" are nothing new, but most responsible legislators are smart enough to avoid them.   The City of Alexandria, Virginia, for example, decided to implement a 4.5% "gross receipts tax" on businesses in the city.   To help out small-time business, they decided to make the first $100,000 of income exempt from the tax.   However, if you made over $100,000, you owed tax on the entire amount.

Oh right, we're talking politicians here, many of whom can't do much math.

I am, of course, happy that I have found this loophole in the Obamacare law.   From now on, you can bet your ass, mister, that I won't be busting mine!   I will work down to the level dictated by the law - $63,720 or bust!

Because there literally is no incentive to make even a dollar more.   In fact, I would  be punished for it.