Should We Worry About the Chinese Economy? No. 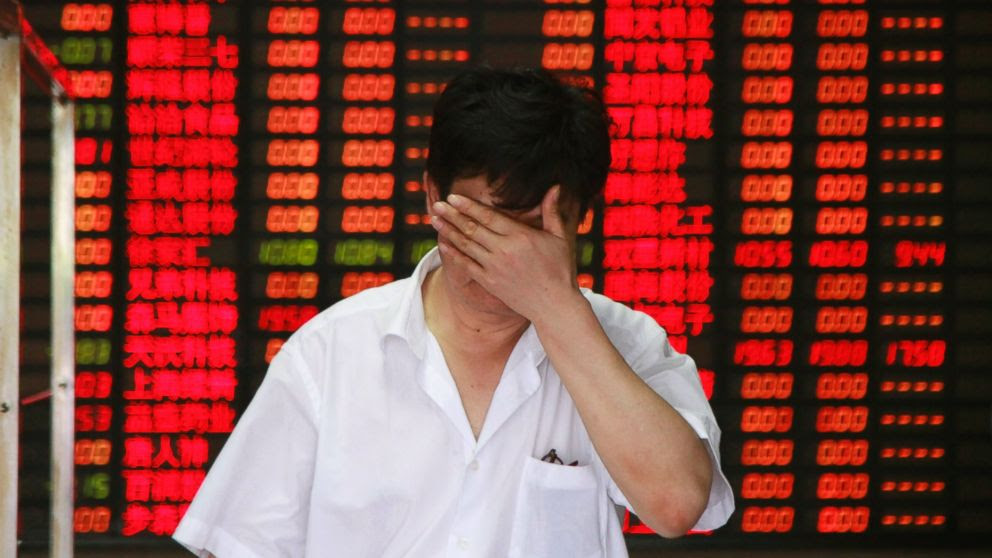 When our economic opponents tumble, this is good news for us, not bad.


The stock market started off the year down a bit.  I "lost" $2000 yesterday.  Big deal.  The media, looking for a clickbait title, said it was the "worst opening market day in 84 years!" which means it was the worst opening day (after New Years) in 84 years.   Which is akin to saying something stupid like "Worst May 5th in 100 years!" - it confuses the fuck out of people who don't understand statistics.   The media loves a good scare story, and bad news sells as we have discussed before.

But is bad news for China or Saudi Arabia also mean bad news for us?  Maybe for some industries.   But on the whole, this is very good news for the middle class in America.

It is funny, to me, that the same people who are anti-China are the same ones saying the sky is going to fall now that the Chinese stock market is re-adjusting.   It is sort of like these gun nuts.   On the one hand, they claim the shootings in Connecticut, Aurora, or San Bernandino "never happened" and were all staged by actors, in order to allow the government to "take our guns away."  In the same breath, they say that the number of mass shootings under Obama is far higher than under previous Presidents.   Which is it?  You can't have it both ways (and both opinions, by the way, are odious).

So we have the same voices saying, not a few months ago, that China was a juggernaut that would take over America, what with all the treasury notes they would "call" (they are uncallable notes, of course) and with their one aircraft carrier (bought used at Putin's garage sale) and that if the Chinese economy kept growing, well, they would overtake us as the world's largest economy!  The sky is falling!

These same voices also raised alarm about Saudi Arabia and OPEC, not a year ago, when oil prices were sky-high - that the "A-rabs" would end up owning this country and we would run out of oil.  The sky is falling!

So you'd think these same folks would be ecstatic that Saudi Arabia is on the skids.   Last year, they burned through 20% of their financial reserves, and oil was $50 a barrel.   Today it is under $40.   They are imposing new taxes on their already pissed-off populace, cutting foreign aid that is propping up neighboring friendly governments, and trying to institute austerity measures.   We could very well see another "Arab Spring"  in short order.   Remember that most people in that wealthy country are dirt poor.

And the odd thing is, with the Saudis pissed off at the Iranians, you'd think oil would drop in value as the tattered remnants of OPEC finally fall apart.   But people, tending to panic, have bid up the price of oil by a couple of bucks in the last few days.  It makes no sense, other than bad news sells, and you can get people to panic about just about anything.

Regardless of how it plays out for the Saudis, the price of oil will likely remain low.   Even if there is disruption in the Middle East, supplies from Russia, Canada, and the fracking regions in the US will fill in the void.   And with increased fuel economy and renewable energy, we are less dependent on oil than in the past.   We really are in the proverbial cat-bird seat.

And the same is true with China.  China sends us tons of goods and electronics and auto parts for far less than their real value in the USA.   One reason their economy is stalling is that a rising middle class in China is demanding more, and their cost of production is inching up.  Meanwhile, America's labor rates have been slashed, almost in half (in the auto sector, particularly) as union plants have closed over the years and non-union plants opened.   With our lower cost of energy and better infrastructure, we are strategically placed for growth - and a lot of foreign companies are investing here as a result.

This is good news, but no one wants to hear it.   Problems in China only means even cheaper goods for America, and that means a higher standard of living for us.

It also helps to put the Chinese stock market into perspective.   The Chinese are big savers - compared to Americans who are just spenders.   Each Chinese person has as much saved as Americans have in debt.   And their stock market is largely small-time "retail" investors, which tends to make it more volatile.   So big swings in their markets are to be expected.

Will there be some losers in this Chinese downturn?   Well sure.   Just as $40 oil is bad news to someone working the fracking fields of North Dakota (and to Exxon and Shell), there will also be losers in a downturn in China.

American automakers (and indeed, European and Asian ones) are seeing (and forecasting) slow growth in 2016, as the Chinese market for new cars levels off.   About half of GM's sales come from China - but not half its profits.   Since the Chinese operations are "joint ventures" with Chinese companies, GM does not make much money per sale.  The real risk to GM is that once sales are saturated in China, the Chinese may start exporting assembled cars to the United States, and if they can keep prices startlingly low, it could cut into American-made small car margins.

But again, this may represent good news for the consumer, who now can buy a cheap car for under $10,000, brand-new.

The other problem for some American companies is in exporting.   With the American dollar rising (or more precisely, other currencies dropping) people who export goods will have a harder time selling their products.   This is bad news for Boeing or GE or Carrier.   Selling giant turbines or commercial A/C chillers or jumbo jets to foreign markets will be harder to do, as the cost of these products is now higher.  But of course, many of these "exporting" companies have hedged their bets by building components or entire products overseas, which may tend to ameliorate the problem.  Other products, such as grain and other food exports, may just have to bear higher prices.

But overall, I am not too worried.   People panicked when our economic opponents became too strong.   Now they panic when they become too weak.  Maybe the real deal is to not panic, as taking action based on fear is sure to end you up in a world of woe.