Resourcefulness is Spurred by Adversity 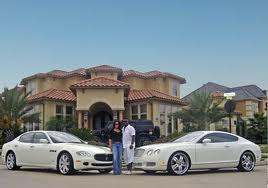 Leisure, wealth, and luxury are the enemies of innovation, hard work, and resourcefulness.


One reason inherited wealth is dissipated so quickly in this country is not because of inheritance taxes, the "death tax" or some such nonsense, but because of basic mathematics, as I explained in an earlier post.  If Geoffry B. GottRocks leaves 100 million dollars to his five children, they each get $20 million.  If they have five children each, they get $4 million.  And within three generations, the inheritance goes from fantastic to barely enough to live on.

And in those interim generations, there is a decision matrix with only three possible choices, and two outcomes (poverty or riches).   Again, as I noted in an earlier post, the heir can either (a) spend it all like a wild playboy, (b) carefully manage the money so as to live comfortably for the rest of their life, or (c) double-down their bet by investing the money in new ventures to possibly become even wealthier.

Option (a) is obviously stupid and has only one outcome - poverty.  Option (c) could work out spectacularly well, or end up just as bad as option (a).   Option (b) thus is the safe bet for heirs, and most of them take it.  Within a few generations, the money is spent, and the succeeding heirs rarely innovate or take risks with their money.

That's why I noted, in another post, why the Koch brothers are so unusual - they took option (c) and took a small fortune and parlayed it into an enormous one.  You don't see such risk-taking by second generation heirs very often.  And in fact, there are two other Koch brothers you never hear about, who took option (b) and live comfortably and in relative obscurity.

Rarely - rarely - does a life of wealth, luxury, and ease lead to aggressive risk-taking and innovation.   Adversity is our friend, not our enemy, as the "wolves at the door" are what motivates us to innovate, to become resourceful, to work hard, and to try new things.   We should not fear it.

What got me started on this was a discussion I had with a friend, who felt that every new college student deserved a brand-new car.   I felt this was kind of wrong, particularly if Grandma is having to co-sign on the loan.   Cars, houses, and other trapping of wealth are the rewards for obtaining wealth, and not something that should be handed out while one is still searching for it.

Another friend of mine gave their kid a new car in High School.  Well, divorced wealthy Dad gave the car (no doubt to assuage some sort of guilt feelings - and children of divorce, if they are smart, know how to play that card).   To me, this seems kind of obscene.  When I was in my 30's and a middle-class government employee schmuck, I had to hump to make payments on a used Camry.   And here's some 17-year-old kid getting the same deal, free and clear.

I used to wax and wash that Camry and take care of it.  It was special to me - my first car with power windows and air conditioning!   My young friend has already put two dents in his gift car, and doesn't seem to care much.  His Dad, alarmed at this, is punishing him by - get his - "forcing him to take it to a body shop to get it fixed"    Wow, punish me any day, Dad!  Particularly when  you are paying for the body work.

Divorced Dad is alarmed, no doubt, as he is my age, and remembers the clunkers he had to patch together when he was in college.   And as an equipment dealer, he is alarmed that his kid is so blase about denting up a brand-new car.  Why doesn't his son appreciate how difficult and expensive it is to buy a new car?

Well, duh, Dad - because you gave him one.  No one appreciates things that are free or below cost.   You give someone a Section-8 house and they will trash it.   Public housing projects get run down because the people living in them don't own them and didn't have to work for them.  It is the same-old, same-old, only this time applied at a family level.

I had to patch together a succession of $50 to $200 junkers for years while I was in high school.   I learned a lot about fixing up cars, and learned to appreciate how difficult it is to buy and own a car.  If I had simply been given a brand-new car, well my life would have turned out differently - and for the worse.

It is one of those "character building" exercises that parents used to talk about (but talk about no more).    Today, we are an incredibly wealthy nation - far wealthier than in the recent past.   A child today, in the middle class, expects to receive a computer, a smart phone, and a new car (or at worst, a late model used one).  They also expect to have their own television in their room, and the latest designer togs to wear to school.   If they are not provided with these things, they are bullied and mocked, of course, in the suburban hells that they live in.

Sadly, it seems that today, on the political landscape of the Left that this lesson has yet to be learned.   Young people - growing up no doubt with free cars from weekend Dad - are expecting the government to be the ultimate weekend Dad, and provide everything in life for free.   And of course, they will appreciate these gifts and not just shit all over them, because, well, because they will, is all.

Adversity is not the enemy - luxury is.   One reason the "kids of today" are struggling right now is that they grew up in an economy that was constantly expanding.   If you were a mall rat in 2005 and wanted a job, well, they were there for the asking.   Everyone was making bucks in the 1990's and early 2000's and life seemed pretty simple.   Then things changed and what they perceived as "normal" is no longer the case.   But of course, their normal was never normal in the first place.

Maybe the next generation - who have yet to be tagged with some moniker that we can use to pigeonhole them into oblivion - will see things differently.  Coming of age in 2008 and seeing their parents and grandparents "lose everything" including houses, cars, and jobs, they will appreciate little things a lot more, and not expect everything to automatically go their way.

One reason the "Greatest Generation Ever" was so great was that they had to deal with the Great Depression and World War II.   To them, early life was nothing but hardship and hard times.   You can only imagine how orgasmic the 1950's seemed to them, with prosperity on every street corner, and no Nazis to deal with.   And you could understand their frustration with the next generation, raised in luxury and rejecting it all as "not good enough".

Perhaps these things go in cycles.  As I noted before, when I graduated from high school, there were "no jobs" (unemployment topped 10%) and inflation was running 10% or more.   Gas was available on even and odd days only - if you could afford it.   And if you had a job and wanted to buy a house, interest rates were 12-14%, sometimes more.   But we succeeded and thrived, even then.   And when the economy improved, it was like an acid trip.

And funny thing, though, I always was nervous not when things were bad but when the economy was going like gangbusters.   Because rapid growth just didn't seem sustainable to me (and of course, it wasn't).

Adversity is a better teacher than luxury.   And in that regard, I am glad I had as much of it as I did.
Newer Post Older Post Home