The CRA and the Housing Meltdown (Politics and Economics) 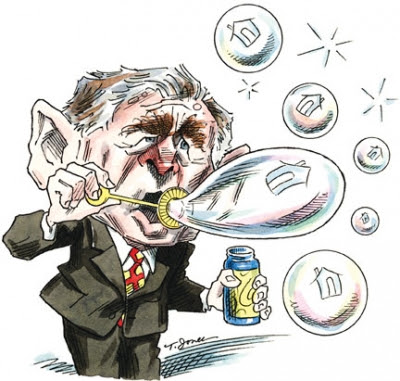 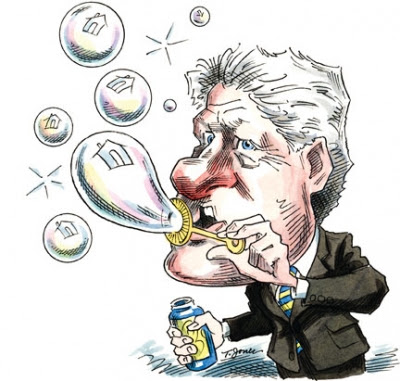 People want to blame economic conditions on one party or one President.   Life isn't that simple.

In response to my last posting, I got a note from a reader about the Community Reinvestment Act, or CRA, which was a program started in 1977 to prevent so-called "red-lining" in lending.   In the past, banks would not lend money in areas they deemed "risky" and thus poor people could not qualify for mortgages - which means they could never own their homes.

Over the years, the act was amended, tweaked, and tinkered with, with regulatory changes made at different times to make it easier for poor people to get mortgages.   However, loans made under the act were never a major portion of mortgages made, although some argue that (as might be expected) their default rate was higher than normal loans.

But the question is, did these types of loans cause the meltdown of 2009?  The answer, to me, is a clear "No" and let me tell you why.

To begin with, this is a political argument, not an economic one.   And it started right after George Bush left office in shame, to go home to his ranch and make paintings of his dog.   Almost right away, the far-right started re-writing history, trying to make it seem like the meltdown of 2009 occurred entirely under Obama's watch, when in fact, the shit really hit the fan in 2008, which is how Obama got elected in the first place.

Just a reminder, because you probably forgot, but gas hit $5 a gallon, housing prices fell precipitously, and both GM and Chrysler were teetering on the edge of bankruptcy.   The shit hit the fan almost the day Obama was inaugurated, when the stock market tanked.  Within a few months, controversial bailout packages were put together (with Bush helping pass these though Congress in the final months of his Presidency) and the bankruptcies of GM and Chrysler managed.  Since then, the economy has improved steadily for the last seven years.

Of course, this narrative of what actually happened doesn't bode well for the far right.   Bush takes a lot of blame for the recession, and the only good things he did are the things the far-right absolutely hates, which was the government bail-outs and intervention in the marketplace.  So of course, those things never happened and it was all Obama's fault.   No, they really believe this, that  prior to taking office Obama somehow managed to crash the economy.

But of course, a lot of this simply doesn't fly.   The economy clearly was crashing before Obama was elected, and thus they have to come up with a new narrative.    Even though President Bush was in office for eight years and arguably could have fixed things, they put the blame on Bill Clinton and make the claim that somehow, he jiggered up a program dating from 1977 to cause the banks to loan money to people who were insolvent.

And for some reason, that clever Bill Clinton was able to prevent the entire mess from happening under his watch, but left some ticking time bomb that George W wasn't able to defuse during his two terms - the time when housing prices actually started to skyrocket.

Frankly, the argument smacks of desperation.   If you have to go back more than eight years to blame someone for something, that's stretching the truth a bit.   If this program was such a problem, why didn't Bush fix it during his tenure?   Why does he get a free pass on this?   And if you read the arguments pro and con about whether the CRA was related to the housing crises of 2008, well, it falls clearly along partisan lines, with some of the more nut-job right-wingers stretching the truth a bit to make their point.   The vast majority of economic analysts - both on the left and in the center, don't think this had a major impact on the recession.

Of course, the reality is a little more complex.   As I noted in my previous posting, the reasons for the housing bubble were many and complex - and inter-related.   What I saw on the ground in South Florida and in the DC market were not poor people buying houses but very rich people or middle-class people getting very greedy.

Mark sold a $700,000 townhouse to a man who worked for Fannie Mae.   He had $2000 a month car payments, $50,000 in credit card debt, and was getting a "Payment optional" mortgage on the place, with a "teaser rate" of 2% that would ratchet up to 6% in two years.   Mark actually stopped the closing and asked the guy if he really understood what he was signing.   The guy basically told Mark to fuck off.  After all, he worked for Fannie Mae!

Well, he used to, anyway.

The mini-mansions and high-rise luxury condos being built in Fairfax county and Ft. Lauderdale were not being sold to poor people through CRA loans.   They were being sold to middle class people, often amateur investors who thought they could "buy and flip" houses or condos and make a killing.  Not only were these kinds of loans the bulk of the bad loans we had to deal with, they were much larger loan amounts.

A friend of mine in The Villages decided he'd get in on the action and buy one house and flip it and make a killing.   When the music stopped, he owned three houses - and owed more money on all of them than they were worth.   This has nothing to do with the CRA.   The high-rise condos in Las Vegas were not low income properties.  The $850,000 condos they were building in Pompano Beach were not the poor house - not with a walk-in humidor.  The vast bulk of overpriced and over-mortgaged homes were made to middle-class and upper-middle-class people, who make up the bulk of this country.  Or did at the time, anyway.

The greed that took hold of America was the middle-class getting greedy.   And these same middle-class people tend to vote Republican.   So the message that "it's not your fault you lost your mini-mansion" is a compelling one.   And if we can blame it all on the poor people (read: Blacks) then you have a perfect storm.   Throw in a black President to blame, and hey - why not just come out of the closet with your Klan hood and admit that you are a racist bastard?  Nothing I've ever done in life was wrong.  All the setbacks I have faced were due to black people.

And seriously, this is the message that the GOP is selling, using code-words.   Even though, under Clinton (again) we reformed welfare so you cannot collect it for more than five years of your entire lifetime, the GOP trots out "welfare queens" at every turn, and tries to convince middle-class people that the reason their stock portfolio has tanked is that blacks took away their money (or perhaps that Obama gave it to them).

Blaming the CRA for the recession is the mother of all weak thinking.   It is a neat way to absolve ourselves of any malfeasance.   But it is not "them" but "us" who refinanced our houses three times, signed "liar's loans" or worse yet, took out "toxic mortgages" on the premise you could "buy and flip" a new condo in a matter of months and pocket tens of thousands of dollars.

WE did these things - nearly everyone.   I know I did some of it - I foolishly took "cash out" of my home by refinancing it.   And I signed a "liar's loan" to buy the house I live in now.   I was fortunate (and smart) enough to sell out when I did - and pay off that liar's loan in its entirety.

Others were no so fortunate.   They used "funny money" financing to buy houses that they felt they deserved rather than what they could afford.   And like small children, when they were inevitably evicted, they smashed those cherished granite countertops in a fit of rage - as if to say, "If I can't have it, no one can!"   But of course, the houses were re-sold, for far lower amounts, and stone countertops really aren't all that expensive to replace.

Naaah!  Let's blame black people, instead!  It's so much easier - and fun!

And why not?   They've been the proverbial (and literal) whipping-boy for the middle-class and right-wing for eons.

No, the CRA didn't cause the Real Estate meltdown.   And no, it wasn't Bill Clinton's fault - not when George W. had eight years in office to change regulations and push new laws through.

But it wasn't George Bush's fault either.   The funny money offered to everyone lead to over-building at all levels - mostly upper-end properties, where the real profits are.   But the real problem was you and me - the conspiracy of 330 million Americans, who decided to all go insane for a decade, and think that their houses were gold mines and worth a fortune.

We caused the problem, not one demographic group, President, or political party.   People who try to make political hay out of this are just wrong - and refusing to own up to their own malfeasance.

And folks like that, who never learn from their mistakes, but instead externalize their problems, end up in a world of woe, as they make the same mistakes over and over again and never own up to anything as being their own damn fault.


P.S. - to all you Leftists who think it was the fault of Wall Street or "the Big Banks" - well fuck you too.

Stop making politics out of this.   What happened, happened because people - lots of people - decided to suspend reality for a decade or more.   Suspending it further with idiotic political arguments isn't helping anyone.

Fuck all political extremists - on both sides!  A pox on both your houses!   Fuckers.