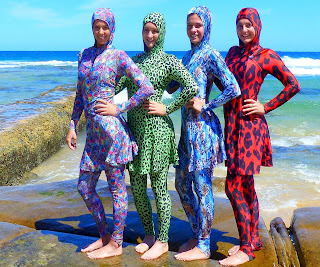 No, Ukrainian refugee women in Sweden are not being told to stop dressing "provocatively" so as to not arouse or enrage Muslims.  It is just a troll.

Two small items in the news which illustrate how the Internet is being manipulated - how we are being manipulated, to further the ends of foreign governments and American corporations (I am being redundant here).

The first was a "news story" that Ukrainian refugee women in Sweden were being told not to dress "provocatively" lest they anger recent Muslim immigrants or drive them to raping.  It was all over Twitter apparently, until Twitter suspended the account of "RMX News" which turns out to be a mouthpiece for the Hungarian government.  The comments accompanying the "article" were all in bad English (think: Zsa-Zsa Gabor) and denigrated Muslims and beatified Christians.  "At least Christians would have some alcohol to drink!" one opined - apparently never having visited the dry Baptist Bible Belt of America.  Not only do they not drink, they don't want you to, either.

Don't get me wrong, I dislike all organized religions equally - they all seem to have one hand on my wallet and want to tell me what to do.  No thank you - go sell crazy somewhere else.

Of course, the story isn't true - it is ludicrous.  And it was accompanied, for some reason, by a photo of refugees in Poland - a classic "low effort" troll using photos scraped from the Internet.  It also is a pretty obvious troll as well.  The goal of course was to promote the narrative Muslim bad, Christian good.  And quite frankly, Islam doesn't need that kind of promotion - it does enough by itself to make it look bad.  Christians are no better - did you read the latest thing about Pope Pius and Hitler?  Yea, fun stuff - and conservative Catholics want to make him a saint!  Same shit, different deity.

But what is interesting isn't the centuries-long battle between different religions, but how the Internet is being used to shape public opinion.  In this case, it was a pretty clumsy and obvious troll - but the one comment pointing out the story was false and the source was a discredited Hungarian government troll site, was unfortunately down-voted to oblivion.  The "top comments" on Reddit were little more than Islam-bashing.

But companies do this sort of thing too.  I saw a "Karen" video online a week or so ago, where some middle-aged people went into a Taco Bell demanding something called "Mexican Pizza" which they are "out of" (the ingredients appear to be the same as in a tostada - what could they possibly be "out" of?).  Anyway, they get into an argument with the manager and the video goes viral.

If you google "mexican pizza" you get all sorts of scholarly articles from USA Today about the crises that is at hand as Taco Bell is "out of" Mexican pizza and we can't wait for it to come back!  Not a paid article, right?  Sure!  Then there are "funny tweets" about the "shortage" as well.  What is going on here?

Well, Rule #1 of the Internet - or any media - is that if you see a product mentioned online, you can bet someone paid to have the product mentioned there.  "Viral Videos" are the bread-and-butter of marketers these days and the more "controversial" the video, the better the marketing.  Volkswagen was a pioneer in this field, with a video depicting a terrorist suicide bomber trying to blow himself up in a Volkswagen Polo.  The bomb goes off but is contained within the car, illustrating the strength of the vehicle.

Of course, people denounce the video as promoting violence or making light of it or denigrating Islam.  Volkswagen then makes a plausible deniability claim, saying that an advertising agency "went rogue" with this "unauthorized video" - which no doubt cost tens of thousands of dollars to make.   Somehow, I don't believe Volkswagen here.  I mean, they are an honest company and all - they would never lie to us, say, about emissions testing - right?

We are living in the age of influencers.  And everyone is paying someone else to influence our opinions.  Governor DeSantis - that paragon of honesty and square dealing, has an advisor who - oops! - just had to disclose retroactively that they were shilling for the government of Georgia (not the State, the Country).  She wrote op-ed pieces in favor of that country, and likely no one reading them thought that maybe they were bought-and-paid-for.

No one, it seems, has their own opinion on anything - we are all paid shills, hyping for someone else.

Even my pathetic little blog, which barely gets hundreds of hits a day, is hit by people asking me to host "guest posts" or promote their products.  I am offered everything from a free bag of potato chips (if I will "review" them) or small sums of money ($25 - which I doubt I would ever see) if I link to their site.  The latter is an attempt at SEO - Search Engine Optimization - where sites which are linked to a lot tend to float to the top of the Google Septic Tank.  Beats paying for Google Ads!

Ironically, I might have ended up as an unwitting shill - a useful idiot - by commenting on sites and linking to them.   There is no such thing as bad publicity on the Internet - even a disparaging review that links to your site ends up promoting your site.  Weird how that works.

Of course, you already know all of this - we all do, deep down.  Yet we are always drawn back in to the hucksterism of the Internet. I am sure there are some Taco Bell "fans" out there who just can't wait for "Mexican Pizza" to reappear on the menu!  Funny thing, though, the real Mexican restaurant we go to doesn't even have it on the menu.  We just get Tacos al pastor, with onions and cilantro, along with a cold beer, the latter of which you can't get a "Taco Bell."  Real tacos don't have cheese, tomatoes, and iceberg lettuce on them - that's American tacos, and sure they are fun, too, but hardly authentic.  And don't get me started on tacos made with Dorito shells - people eat that shit?  Oh, well, here I am, being an unwitting shill for some fast-food place.

Of course,we are headed to another election season, and this sort of nonsense is going into high gear.  Facebook is frothing at the mouth about how our precious tots are being encouraged to go transgender while reading math books promoting critical race theory.  Because that actually happened, right?

And it's the most important issue of the day as well.