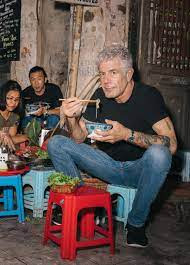 There are second acts in American lives - and final acts, as well.

I was reading an "oral biography" of Anthony Bourdain, which is an interesting gimmick. Rather then reporting the who/what/where/when/why sort of thing, the author talked to people in "Tony's" life and then reported verbatim, what they said.  Kind of interesting, hearing different perspectives on the same events.

What was interesting was that Bourdain was a big stoner (no surprise there) and went to Vassar because his girlfriend was going there (Men - always thinking with the wrong head!). He would write term papers for other students for drug money - and they would get an A+ on them.  His own work, he sort of phoned it in.  His parents, who were not very wealthy, were livid that he was "wasting" an expensive education.

One summer, he went to Provincetown and got a job as a dishwasher (when his roommate got sick of Bourdain freeloading!) and the rest is history.  He dropped out of Vassar and was accepted by the CIA (Culinary Institute of America - not the other CIA!).   With his writing skills and cooking skills, he became wildly famous, particularly after Kitchen Confidential came out.  Never send back a steak!

Of course, his life had a tragic ending - he was still into drugs for a long time, from what I can divine, and killed himself at the height of his fame.   But that's not the point.

Many young people in his situation would stay at Vassar, be miserable, and get mediocre grades because they thought it was what they were supposed to do or what their parents wanted them to do, and of course, you can't go against your parents, right?  When you are under age 25 it is hard to think for yourself - the human mind is still unfinished and easily influenced by outside forces.  It takes courage to say, "This isn't what I want" and move in a new direction.

UPDATE: Actually, he reinvented himself several times.  While working as a chef, he wrote two fictional crime novels.  So he went from chef to author in transition #2.  And then he became a "celebrity" and television personality.  In fact, he kept reinventing himself throughout his life.  It can be done!

Yet, a surprisingly large number of people do this.  When I was at GMI, they told us that 1/3 of freshmen eventually dropped out.  Many other schools are the same way.  Those people find something to do - they don't just fall off the face of the Earth.  Similarly, maybe one in ten young associates at a law firm become partner.  What happens to the other nine?   They don't end up homeless.

What is a mistake, in some cases, is to "stick it out" and "finish what you started" as my Dad used to say (he dropped out of Engineering school and got a management degree, I later found out.  I am so ashamed!).  So a young man graduates with student loan debt, a mediocre grade average and a pretty useless degree in a subject he found out he doesn't really like.  Was that a wise choice?

The point is - and I did have one - is that you can change your mind.  There are second acts in American lives, no matter what that loser F. Scott Fitzgerald said.  We all end up finding our path, and the idea that your life has a "story arc" is utter bullshit.

As for "Tony?"   Well, I am sure he was a nice guy and also an asshole, like most of us.  I am not into celebrity worship as you might already know.  I read his "Kitchen Confidential" and maybe saw a couple of episodes of his show.  I am not a fanboy of any celebrity - sorry!  And apparently, he did some bad things in his life - like paying off a boy that his girlfriend "molested" when he was 17.  Ironic, as his girlfriend was the one who blew the whistle on Harvey Weinstein.   Life is more complication that good versus evil, it seems.