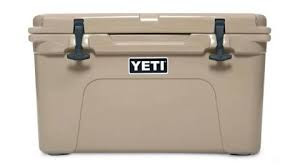 A reader writes with a link to an article about expensive high-end coolers.  Do people really need a $500 cooler?  And they get that expensive - plus some.  But some "consumer" studies have shown that these fancy coolers are really not much better - if not in fact worse - that more plebian models. And promises of keeping things ice cold for days are a little over-stated.

I wrote before about ooolers. When I was a kid, my Dad would buy these 99-cent Styrofoam coolers at the grocery store.  He would put them in the back seat of the car and they would squeak, squeak, squeak, as we went down the road.  And of course, they would break - a corner would crack off and Dad would yell at us for "breaking" it, when in fact, it just fell apart.   It never really kept things cool, but that was because he would empty the tray from the icemaker into it (all of six cubes) and not into a ziplock bag or anything (they had yet to be invented) so all our food got warm and no doubt we all got food poisoning.

The gold standard of coolers back then was the Coleman "steel-belted" cooler, which usually came in a hammertone green color or perhaps grey.  They cost a whopping $99 back then, which would be over $700 today, 50 years later.  And yea, Dad thought that was an unnecessary extravagence.  Of course, he might still own that cooler today, or someone in the family would.  Today,they are still $99 or less, but with inflation, they are far less costly than before.  And since then, Coleman has expanded their line (and others such as Igloo, have entered the picture) with all-plastic blow-molded coolers insulated with sprayed-in expanding foam.

They work pretty well, are cheap and durable and you can literally find them by the side of the road (when they blow out of someone's pickup truck bed).  I must have owned a half-dozen in my lifetime.  They do suffer from some design defects.  To begin with, they are not very thick in terms of insulation, as most people use them to keep food cold for a few hours at most.  You are expected to fill them with ice and cold beverages and the lack of insulation is made up for by more ice.

Second, the seals are often poorly designed, or in the case of some Igloo coolers, nonexistant.  The plastic top snaps in and that's it - no seal.  The Igloo rotating top cooler is even worse - it has no insulation on the lid.

And then there are the hinges - often cheap and sometimes just folded pieces of plastic, as was the case with our Coleman "steel belted" cooler which was given to us by a friend.  We actually found a Coleman outlet store in Lake George, New York, and they sold replacement stainless steel hinges which we used to repair our old "steel belted" cooler.  It lives on, today, albeit a little rusty around the edges.

For years, people lived with these kind of coolers.  They were relatively inexpensive (by the 1980's even I could afford to buy one - and one for Dad for Father's Day) and they worked pretty well.  They were durable, too.

But like so much in the last 20 years or so, the next generation is re-examining everything that was done before and saying, "Gee, couldn't this be done better?"    Enter Yeti.

Yeti hit the scene a few years ago and we first saw them on the dock at the marina - because boaters have a lot of disposible income to spend.  Yeti solved the design problems of the older coolers by increasing the thickness of the insulation, putting a good water- and air-tight seal on the lid, providing it with decent hinges and a latching mechanism that appeared to be lifted from the hood of a Jeep.  They weren't cheap - some models cost $500 and up.  But they sold well to people who had money to spend (or thought they did) and having a "Yeti" sticker ($10) on the back of your pickup truck (next to your "Salt Life" sticker, natch!) showed the world that you were a serious outdoorsman and could afford nothing but the best gear.

Yea, status rears its ugly head, once again.  No one puts "Coleman" stickers on the back of their pickup trucks.

Butit went beyond that.  The Yeti people sold a line of stainless-steel vacuum-insulated cups (what we used to call a "bomb calorimeter" in science class) that once again, leapfrogged the old-school cups and containers.  Tervis Tumblers?  Oh, pleeze, so 20 minutes ago!  And you poors with your red solo cups, getoutahere!   Again, it was also a status thing, to be seen sipping your hot coffee from your $20 Yeti tumbler, while the poors had to deal with Styrofoam cups.

But like so many other things, first to market is often last in the marketplace, and competitors took notice of the Yeti trend and started selling knock-offs for cheap, that worked almost as well or maybe better sometimes.  Walmart sold stainless steel tumblers for 1/4 the price of Yeti.  In fact, they came out with a host of Yeti-like coolers under their Ozark Trail line, and for most people, these types of coolers and accessories work just as well as a Yeti, for less than half the price.  There is no secret sauce to cooler technology.

In fact, the real evolution in cooler technology is in electric coolers.  Years ago (a decade or more) we bought a Coleman theromelectric cooler.  It works great for what it is - you can't use it to cool food, but to keep it cool.  One reviewer online complained that she filled her Coleman thermoelectric with warm sodas about a half-hour before her son's little league game and was upset when they weren't ice cold an hour later.  It just doesn't work that way and most people don't understand basic thermodynamics, even on a colloquial level, which is why they get ripped-off time and time again.

We paid $99 for that Coleman thermoelectric and it has worked well and still works (we used it when we rehabbed the condo recently).  I have had to replace the power cord once and the 110V adapter (power supply) can be a bit flaky (they don't like to be dropped) and I have had to buy two replacements on eBay. For what it is, it works well.  Maybe the Yeti people need to do a Yeti-ization of that cooler.  Thermoelectric cooling works, it just needs to be upgraded a level or two.

So, in a way, it is a good thing that Yeti came out with its $500 coolers, as it forced the rest of the industry to up its game.  It's like all the "luxury" accessories for cars back in the 1960's - air conditioning, power locks, power windows, cruise control - all pretty standard today on even the cheapest of cars.  The Yeti people showed what could be done if you thought outside of the box (no pun intended).

Yeti has had its ups and downs over the years.  They over-produced back in 2016 and had an excess inventory problem.  Today, like just about everyone else, they have excess inventory as Americans stopped buying "stuff" in response to the recession.  In a recession, the first thing to go are luxury items like $500 coolers, boats, and motorhomes.   Of course, the gun nuts have been blowing up their Yeti coolers in a hissy-fit demonstration of stupidity because Yeti doesn't sufficiently support their cause.  It is not that Yeti is against gun ownership, they just choose not to sponsor it,  This is akin to gays boycotting Coors not because they are anti-gay, but because they pulled their ads from the Advocate.  That, of course, didn't happen - the gays are not  that stupid - but give it time, they'll probably do that next in this era of hyper-partisanship.

But beyond stupid NRA stunts (and who is dumb enough to blow up their cooler for an organization that cares nothing for them and is rife with corruption?) the Yeti people have illustrated that while it is possible to "reinvent" a decades-old technology, the marketplace will quickly copy those improvements, unless they can be protected by intellectual property.  In the case of coolers, there isn't much to protect.