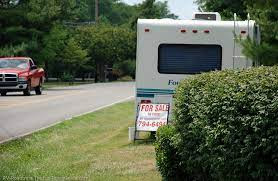 Is a recession coming?  Sure.  What gets sold first?  Toys.

A reader writes asking whether the RV shortage is over, and if so, whether there are used RVs now hitting the market, particularly as the "CoVid Campers" get sick of RVing.  From what I can see, the answer to both questions is "YES."

We drive by RV dealerships, such as one mega-dealer in Brainerd, Minnesota, and see row upon row of trailers, Class-C motorhomes, Class-A motorhomes, Bus coaches, and Class-B vans.   Dozens of them.  Hundreds of them.  All lined up in a row, and no one out looking at them.  If there is a "shortage" of RVs, you can't tell by the inventory at the RV dealers - they have row upon row of them.

Trucks?  Maybe still in short supply.  We've driven by dealers earlier in the year - rural Ford dealers where we used to see, literally (and I mean literally in the literal sense!) 100 F150 pickup trucks lined up in a row - all colors, all trim levels, you-name-it.  They had inventory before the pandemic.  But in recent years, we've driven by car dealers and seen maybe a half-dozen sad-looking used trucks for sale, if that.  Many smaller independent used-car dealers have nothing - they went out of business and were shuttered.

But slowly, that is changing as well - we are seeing a trickle of trucks coming back to the car dealers - maybe a dozen lined up.  Not a lot, but quite a bit compared to last year.  So maybe that shortage is easing as well.  The lack of semiconductors seems to be the real bottleneck in the car and truck business.  This too, shall change, over time.

But what about used rigs?  Are CoVid Campers discovering that RVing isn't all they thought it would be?  Now that the airlines are cancelling 31,000 flights a month (!!) and people are going back into the skies (and behaving badly - worse than before!) and Disney World, freed of its burden of providing fire and police services (That backfired, didn't it, DeSantis?) is once again open, are people dumping their RVs?

Again, this is anecdotal data, but we are seeing more and more RVs for sale - along with other toys - by the side of the road.  Yesterday, on the way to Voyageurs National Park, we saw the redneck trifecta - a monster pickup truck, a bass boat, and a Harley motorcycle, all parked together with "for sale" signs on them, by the side of the road.  It had to be the same guy, as the bass boat was hooked up to the monster truck.  I guess he needs the money more than he needs the toys.

Whenever there is a recession, toys are the first thing to go on the chopping block. There is, of course, a hysteresis effect - people deny they are in economic trouble for as long as possible, and try to "hang on" to toys, thinking that they are "giving up" by making the rational decision to untie the stone from around their neck, as they slowly are pulled underwater.   But eventually, the stuff gets sold - either by the owner, or by the bank, when they repossess.

Of course, this plethora of toys for sale by the side of the road could be an example of constipated commerce. In northern climes (Central New York, Maine, rural Michigan, Wisconsin, and Minnesota) during "tourist season" many a local puts all their junk out by the side of the road with ridiculous prices on them - hoping some "flatlander tourist" with more money than common sense, will buy it.  It rarely works, but the sailboat or TransAm gets pushed back into the garage for next year's sale season.

That is another possibility, particularly since the yahoos are hearing poverty stories about how their clapped-out pickup truck is now worth more than a new Mercedes S-class.

But I think not.  The fellow selling his truck, his bike, and his bass-boat - that just smacks of desperation.  Or perhaps divorce or death.  But if that was the case, there are an awful lot of divorces and deaths going on, based on the number of RVs we are seeing by the side of the road with "for sale" signs on them.

Incidentally, that is about the worst way to go about buying or selling a car.  Buying something because you drive by it on the way to work every day is usually a bad idea.  And in terms of best price and largest audience, well, whoever drives by your house isn't going to hit either target.

The crazy years may be wearing off - or ready to go into high gear.  Who knows?  All I know is, this party can't go on forever.   With so many people hurting for cash, eventually something has to give.  I wrote before how WalMart is going to lower prices (any time now, Wally - don't hold back!) as they have "excess inventory" as people have stopped buying.  Target reports a 90% drop in profits, because of slimmer margins - again, people stopped buying.  No word whether that 90% drop is relative to the obscene profits all retailers were raking in, due to "inflation" (read: arbitrarily raising prices).

But the upshot is, every Walmart we have visited on this trip is overflowing with inventory.  The one in Brainerd was storing inventory, still in the shipping boxes, in the garden section, as they were running out of room in the store and the back.  We are seeing people driving more slowly and carefully as well - cutting back on gas usage (we've been getting a whopping 15 MPG with the trailer here in Minnesota!).  Just a few percentage points change in demand versus supply can cause huge swings in prices - just wait for it.  We saw this in 2008-9 when gas went from $5 in some places, to $2 within months.

I suspect we may see the same thing happen shortly, again.