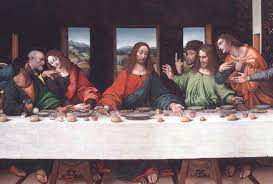 Eating food together is a human ritual of bonding.

In Robert Heinlein's Stranger in a Strange Land, he posits a Mars where "ancient ones" (Martians) have all but become extinct on that dry planet.   One of their ancient rituals and traditions is to share water together, which has great religious and philosophical meaning.

The same could be said to be true for eating together here on Earth.  Dining together is not merely refueling your body - or at least it shouldn't be - but be a bonding ritual between family members, friends, and lovers.   When going out on a first date, where do you go?  To a restaurant.  And for your 30th anniversary?  An anniversary dinner, of course.  Weddings and funerals - both marked by meals and eating.

Or, at least they were.  I noted before how Americans are using restaurants as their kitchens, but sometimes not even that.  They go to a drive-in window, two or three times a day, order bad food and wolf it down before they leave the parking lot.  It is not very satisfying and not very social, particularly as so many eat alone.

We like to go on picnics or pack a light lunch while kayaking, such as today on Coralville Lake in Iowa (Their motto: "Free of Brain-Eating Amoebas since 2015!").  And many times, the preparation of food becomes a group activity.  I may not be the greatest cook in the world, but I can chop garlic.

Sadly, it seems that we squander this blessing more and more.  It is hard to put down the phone or book while eating and pay attention to your significant other or friends or other dining partners.  We become immersed in another world and fail to appreciate the world in front of us.

I am not sure why I thought of this, only that if I was to lose Mark (or he me) which will inevitably happen someday, the greatest memories, I think, will be of sharing a meal together or a hors d'oeuvres over cocktails, that we prepared together.

It's such a simple thing, really.  And yet, we let it slip by.  And for what?  So we can check our Facebook?