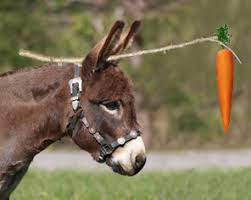 I mentioned before that years ago (about 40 in fact) I moved to Fairfax County and after a couple of weeks, a county newspaper started showing up at my door.  I thought it was a complimentary copy as I never subscribed to it.  A month later, I got a bill from the newspaper and a month after that, a threatening letter saying they were going to send my bill to a collections agency if I did not pay.

I found the phone number for the publisher - his land line!  I think a disgruntled secretary at his office gave it to me.  I called him and read him the riot act and surprisingly, he was contrite.  He admitted they made a mistake.  They hired a company to sign up new subscribers, and they sent out canvassers who were on commission.  They were paid based on how many people they signed up.

So they were sent out all over the county and they knocked on doors and of course, no one was home as everyone was working.  At the low-rent apartment building I was at, I doubt many would have signed up anyway.  So the canvassers wrote down our addresses and put in our names which were on the mailboxes (which is why many people don't put names on mailboxes in apartment complexes!) and "signed us up" for the newspaper.

The newspaper paid for all this, the canvassers were paid (temp workers) and a month later, the newspaper realizes they have been had - and they have a lot of angry "subscribers" and now a lot of ill-will generated.

In retrospect, it is pretty easy to see how such things happen.  You set an incentive and people work toward that goal.  Some folks work to reach that goal, others work the system.  At the Patent Office, we had production quotas, and you could work "overtime" if you examined more cases - the more you worked, the more money you made.   But a few people realized that if you pretended to examine cases and just submitted them as examined, you could fool the system - for a while.  Eventually, however, such schemes explode.  One Examiner would count a case as "examined" and then hide the file in the drop ceiling above his office.   Applicants called to complain, no one could find the files and one day, the ceiling literally fell in on him, as the weight of all those files was too much for the ceiling tiles.  He was fired from the Patent Office.  Ironically, a law firm hired him - a squirrely law firm at that (and they exploited the shit out of him - where was he going to go now?)

Incentives were part of what caused the real estate bubble of 2008.  In the 2000's mortgage brokers and bank lenders were incentivized to write mortgages.  The more mortgages you wrote, the more you got paid!  You were not paid more for good mortgages over bad and so many mortgage lenders would cut corners to issue mortgages for properties that were overpriced, to borrowers who could never pay back the loans.  They called them "Liar's Loans" based on "stated assets" and "sated income" and a "zip code appraisal."  The whole thing blew up of course.

Wells-Fargo got caught in a similar bind - they gave incentives to employees to get customers to open new accounts.  The incentive was along the lines of "meet this quota or you're fired!" - so the customer service people would open accounts in the name of customers without their permission as if customers wouldn't notice an extra credit card, savings account, or whatever, when they logged on to the Wells Fargo site.  As always, these things blow up, the reputation of the bank was damaged and they paid huge fines and also class-action suit damages.

You would think people would learn, right?

Not so.  US Bank (which I never heard of until today - the name alone sounds sketchy as hell) was caught doing the exact same thing as Wells Fargo - incentivizing employees by setting "new account" quotas.   And they were fined and whatnot, but the damage is done.

Incentives are fine and all, but they can backfire.  Car dealers use incentives to get salesmen to sell cars.  Sell this many cars by the end of the month and you get a bonus!  So salesmen sell a car they know the customer cannot afford, using a sketchy loan at a high interest rate.  So long as the customer isn't a total crackhead, you can put them in a car. Repossession is all but assured.   It isn't good for the economy overall, or for society, the loan company, or the consumer.

Financial advisors put you into a mutual fund because this month, there is a $500 bonus for signing people up for that fund, over another.  In real estate, agents get a bonus for selling certain houses - usually $500 to $1000 - and that's perfectly legal, apparently (it was done back in the day when Mark was an Agent).  Maybe that is why Redfin is so popular - with agents and customers.  You get paid to work, not to sell, and customers sense they are not being pushed into buying something they don't want.

Of course, we all have incentives in daily life.  If you run a business, you have to pay rent, salaries, and overhead. So a customer comes in the door, you sell him - anything - and that is one reason why marginal businesses are often raw deals.  They are struggling, so they sell unnecessary or overpriced services or products - or at least try to.   If you only get one customer a day coming in the door, you have to sell him the whole store.  It is one example where a business that looks busy and successful might be a better deal than one that looks sketchy and marginal.  On the other hand, the major car-repair chains have all be hauled into court over allegations of over-selling repairs - because the mechanics are on quotas and incentives.

You see it all the time in daily life.  The cashier at Home Depot, fresh from a training seminar, asks if you want to open a Home Depot store card, "90 days same as cash!" they helpfully suggest.  They aren't doing it to be helpful, they get a reward for so many cards signed up.   I am not sure how it works at fast-food places, but the gag back in the day was, "Would you like to Super-Size (tm) that?" which I think they stopped doing when some activists pointed out that one such meal was enough calories for an entire day - and then some!

There are, in fact, very few things we are not incentivized to do, even if the incentives are just a hit of dopamine.  You post something on Facebook and when it gets 10 "likes" you feel validated.  But of course, no one was ever harmed by a posting on Facebook, right?  Oh, wait...

So incentives are here to stay and are, in fact, part and parcel of our makeup.  It is like capitalism - the idea that buying and selling things is some sort of artificial construct and not the default mode of human operation is just ridiculous.  People have been swapping stuff since time began - and cheating one another as well!  We are incentivized to survive.  You get hungry, you have the incentive to find food - it goes back to cave-man days.  And yes, even animals are subject to the same incentives.

Thus, it is laughable that these banks profess surprise and innocence when these incentive schemes run off the rails.  They should expect that employees will game the system, particularly when threatened with firing or offered huge sums of money.  In setting up any incentive system, you have to anticipate how people will try to game the system.

For example, so-called Internet Influencers.  People go online and post things on Facebook, Instagram, Tick-Tock, Reddit, Blogs, Vlogs, podcasts, and YouTube, hoping to get followers - "Like and Subscribe!" they chirp.  The system rewards them with advertising bucks and swag from the companies they promote.   Problem is, the field is crowded and it is hard to break out of the pack.  So you do something horrific and post it on Tick-Tock and it gets hits, only because people re-post it elsewhere, saying, "Can you believe what this lady did on Tick-Tock?" (And those may also be put-up posts as well).   Thus, the Internet becomes a race to the bottom as people do more and more horrific things, just to get attention.

I noted before that the human brain (or any animal brain) is a neural network and will "learn" new strategies that are often quite contrary to what you thought you were teaching the network.  You program it to identify Soviet tanks, but it learns only the difference between spy photos (darkly lit and grainy) and "beauty shots" provided by US tank manufacturers.   You think you are teaching your teenagers to be responsible, but what they are actually learning is how to circumvent your rules.  Hard to win at this incentive game - the human brain is a powerful neural network.

These banks are to blame for the actions of their employees, not only because they are liable for employee actions in general, but because they should have foreseen how incentives can backfire.  When setting up any incentive system, you have to think about how someone might try to game the system - often with disastrous results.  An employee can sign up hundreds of "customers" to unauthorized accounts, cash the incentive check and then fly with the wind - probably to work at a competing bank and doing the same thing.

And often, these behaviors are not logical.  The "scam" that I noted above at the Parent Office was known as "mortgaging" cases and it is largely a thing of the past as they moved to an electronic docketing system years ago (the scammers would tear up the docket cards, making it hard to trace the existence of a case, much less its location).   But as the name "mortgaging" implies, eventually the mortgaged cases - which were counted as done, but not done - would have to be completed - doubling the quote for the next week.  It was like payday loans - they snowball out of control and eventually explode.  But this week, well, everything is fine.

People with addictive personalities (which is to say, all of us, to some extent) are particularly subject to this effect.  You hear it all the time from people - "I just need a loan to tide me over!" when a loan just creates an additional burden to their lifestyle.  But this week, everything is fine.

It is like a fellow we met in Florida who would buy expensive cars from out-of-State car dealers and then finance them using odious loans he never paid - often using a girlfriend's credit to get the loan.  He would then drive to Florida and "hide" the cars from the repo man and drive them until they were finally found - and repeat the process.  It makes no logical sense - running away from judgement after judgement with a wrecked credit record, but I guess it made "sense" to him.  A lot of drugs were involved - a lot.

So, when designing an incentive system, you not only have to anticipate logical work-arounds that people might try, but illogical ones as well.  People will do weird things even for a short-term gain that has horrific long-term effects.

Don't act surprised when it happens!