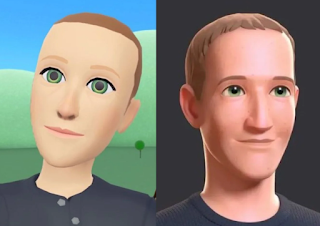 The concept of online avatars is nothing new.
Many years ago, in the 1990's, I used to fly out to silicon valley to meet with various tech companies to interview Engineers and "take cases" - get data to write Patent Applications.  I would spend time with the Engineers and in-house counsel and take them out to Chinese buffet luncheons.  It was a different world back then, and I was a different person.  It seems all like a dream, now.
I recall spending a luncheon with a friend who was in-house counsel, and he regaled me with tales of a brave new online world that would come to being - sooner than we expected - with everyone living a "second life" online, in a virtual reality world, where we could chose our own "avatar" to represent us.  It could be a 3-D rendering of our image, or a cartoon-like copy, or perhaps even some sort of animal or other creature.  It would be fun and interactive.  There would be games, there would be work, meetings, shopping, online storefronts.  Your whole life could exist in this virtual world.
That was the 1990's.  In 2011, someone published a book called "ready player one" which also described this online world.  But by then, it already existed in an online "community" called "Second Life" which is still around, but isn't very popular anymore.  When it first came out, people rushed to buy land ("islands") in this new virtual world, often paying enormous sums of money for the privilege.  IBM famously bought an "island" in second life.  I think they abandoned it later on.
Of course, the idea goes back further than that.  Over a century ago, E.M. Forster wrote about a future world where we would all cocoon in underground lairs, catered to by machines, and interact online via video, exchanging our pointless and often incorrect ideas about the world.  It didn't end well.
Maybe that is why "Second Life" never took off, and why Zuckerberg is struggling with the "Metaverse."  It isn't that the plebes can't appreciate how wonderful a virtual world will be, but realize it is a dead-end to civilization - trading our real world, with all its problems, for a clean, sanitized virtual land - and then abandoning the real one in the process.
Maybe too, Zuckerberg is late to the game.  A legion of "gamers" has already been sucked into this virtual world, in the form of interactive, 3-D, online games, where they can play against people from across the globe and interact with them as well.  When authoritarian regimes try to suppress social media, they usally forget about online games, which have interactive social media aspects to them as well.   Dissidents took notice.
"Meta" as Zuckerberg now calls it, wants to co-opt that entire space - make it so that the "Metaverse" becomes the default platform for all online games, so that if you want to be a "gamer" you have to go to Zuck.  Whether the marketplace would embrace such a monopoly remains to be seen.  Facebook is already facing stiff competition from competing online services.  Most young people today spend more time on Tick-Tock and YouTube than they do on Facebook.  The "metaverse" may be his answer to this trend.
But as the above "avatars" illustrate, making 3-D real-time moving images is a lot harder than it looks (no pun intended).  The rendering engines needed to do this, for a virtual world where dozens if not hundreds of elements and avatars are in real-time motion, are hard enough.  Rendering them on a VR headset without any lagging or delay is even harder.  One way to "fix" this is to simplify the images so that they don't require a lot of processing.  The end result, as Second Life illustrated, was bland-looking avatars that are not all that convincing.
I tried Second Life when it first came out, but our internet connection and desktop computers were not fast enough.  It was a slow, buggy experience that took minutes to load motion images that should have taken seconds.  I quickly gave up.
But even if the technical hurdles can be fixed (and eventually, they will, if people throw enough money at it) and I get a super-high-speed internet connection and a powerful new computer (will Zuckerberg pay for these things?  Because I won't!) I wonder whether I would spend much time in a "metaverse" environment.  I suspect it will just be like a 3-D Facebook, with the usual banalities from bored Granddads and hysterical housewives.  And yea, there will be bullying and disinformation and bots and trolls.  Qanonsense goes 3-D!  I can hardly wait.
I suppose the gaming aspect of it might be attractive to some, but it doesn't seem like Zuckerberg is attracting the best and brightest of the gaming coders.  And gamers are noted for being fiercely independent and not married to one platform over another (the ultimate gaming station doesn't have an Xbox, a PS-whatever, a Nintendo Switch, or a PC but all of the above.  And gamers seem, from what I can divine, to be brand-agnostic - notoriously dumping one game or platform when the new edition of "Kill a Hooker XXXIV" doesn't meet up to expectations (or maybe was written by a woman - yuk!).
But Avatars?  This is being pushed as some sort of new technology?  It is an idea that is a century old, has been tried before, and has yet to be successful.   And I don't think the technical problems are to blame.  I think the reality is, outside the gaming world, the rest of us don't want to spend the majority of our lives online.
But I could be wrong about this.  Maybe "Second Life" was just the Myspace of Virtual Reality - and maybe Zuckerberg is smart to jump on this and make it work after others failed at it.
Maybe.  But I doubt it.
Newer Post Older Post Home