Cutting Your Own Hair 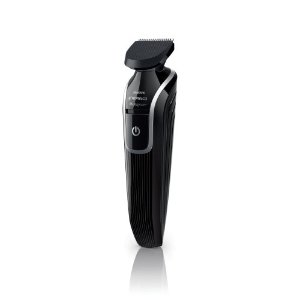 
I'm old and don't care too much about having a fancy haircut.  Maybe this comes from living on a boat for a while.   You just want your hair short and out of the way.

Yea, when I was young, I had super-long hair.  Then one day I got it all cut off and had a wicked flat-top that I kept for several years.  Finding a barber who can do a good flat-top is hard, however.   Most don't want the hassle of the labor.

I let the flat-top grow out into a Reagan-esque pompadour for a while, but then went back to short.

Eventually, I just went to a "set the trimmer at #5 and cut it the same length all over" which is the easiest haircut in the world to do.

Problem was, the local "barbershop" which played Rush Limbaugh at full volume, made me wait a half-hour to get a haircut and then wanted $15 plus tip for a mediocre haircut.   We're not talking a nice flat-top or some hard-to-do cut, just a "set it at #5 and mow the lawn, dude" kind of thing.

So, about five years ago, we bought a Norelco G380 trimmer at Bed, Bath, and Beyond for about $20 with those coupon deals.    It still works, but the battery is getting weak, and the blades sort of dull.  (We also have a $20 Wahl 110v model that is still going strong).   I went about looking for a replacement, but the G380 is no longer available.   There is a G370, but they want nearly $50 for it, even though it appears to be a copy of the G380.

For some reason, Sears wants a staggering $185 for it (!!!!) which to me is a sure sign Sears is heading for oblivion.   Or maybe there are enough dumb people out there who will pay $130 more for something they can get on Amazon for fifty bucks.   Actually, this is probably true.  But I digress.

Does cutting your own hair work well?   Well, three friends now regularly ask for haircuts as well, so I guess it doesn't look too bad.   And the savings are not small, either.

Consider that we would get our hair cut at least once a month (if not every two weeks) and with tip, we are looking at $20 each.   For five years, times 12 months, times two people, well, that comes to a staggering $2400.

That's a lot of money, period.

It is also a lot of time saved.   And since you can "trim" on almost a daily basis, you end up looking better, not worse.

Now, for you barbers out there who say I am taking food from your children's mouths, let me say this:   You need to re-think your business model.

No one wants to sit around your shop listening to Rush Limbaugh for an hour or so, while they wait to get their hair cut.   And spruce up the place, for chrissakes.

And learn how to cut hair!   If you are going to be a barber, then be able to do esoteric cuts that people will pay extra for.

When I was in Ithaca, we went to a barber who knew how to cut hair.   I remember he did a kid before me, and when he jumped down from the seat, he said, "Awesome!" with a big grin on his face.   That is the kind of cut people will pay extra for.

But when someone says, "Gee, I'd like a flat-top" and you say, "Well, that will cost extra" or "I don't know how to do that" then maybe you need to hang up the scissors.

Who knows?  Maybe longer hairstyles will come back into fashion.  But today, being bald or having very short hair is the style, and such cuts are easy to do-it-yourself.   Your product is dated, old, overpriced, and of poor quality - like a Pontiac Grand Am.  They no longer make Pontiac Grand Ams.

No one has a "right" to stay in business.   And when your product is too expensive and of poor quality, well, people will shop elsewhere or turn to other products.   A haircut that takes a half-hour shouldn't cost $15, unless you think that your services are worth $30 an hour - and not many people are making that these days.
As for me, I doubt I will ever go back to a barbershop (or a hair stylist) for the rest of my life.  The old Norelco trimmer does it for me.   Cheap and easy, and $2400 in my pocket.