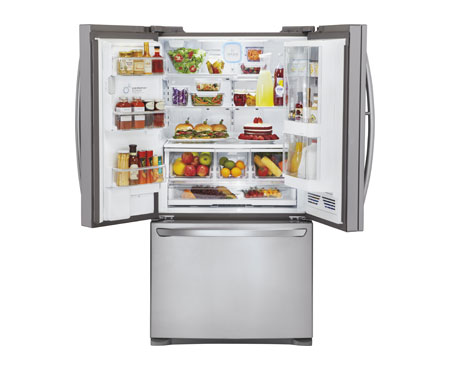 Fancy refrigerators are all the rage.  Are they worth it?  No.

We had to throw out a bunch of food yesterday, as our fancy refrigerator, once again, let us down.  What happened?   The door didn't close all the way, and the temperature inside the refrigerator went to 67 degrees (according to the "control panel").   The humid air iced up the passage between the freezer and the refrigerator compartment, so the whole thing had to be shut down, defrosted, and cleaned.  Hundreds of dollars of food, wasted.

Why?  Well, we bought one of these fancy three-door refrigerators that are all the rage.   The bottom is a freezer drawer that slides out (which is nothing new, my parents had that in 1968).   But the top was two doors that meet in the middle with a very fancy and esoteric mechanism to seal them together.

The problem is multifold.   First, the resistance from the mechanism means you have to close the door pretty hard, or it won't close.   Second, if you slam the door, it creates a compression wave of air that will blow the other door open.

I adjusted the refrigerator so that it leans way back now (as far as I could get it to go) so the doors tend to close.

The manufacturer clearly was aware of this problem as they installed a "door alarm" (in the aforementioned control panel) that beeped very faintly when the door was left open.   Problem is, it was so quiet you could never hear it.   And it eventually died, so it was ineffective.

A temperature alarm also beeps (faintly) when the temperature in the cabinet exceeds a certain limit.   Again, it is hard to hear, and you can sleep all through the night with this thing beeping and never discover the horror until the next morning.

It is a nice refrigerator, other than the fact it ruins food on a regular basis and cost well over $1000. 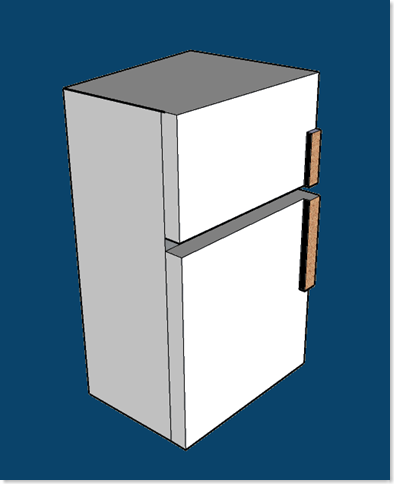 The standard 2-door refrigerator can be bought all day long for about $400 or less.  People actually give these away.   And yes, most can be fitted with an icemaker.

The standard simple two-door "box" refrigerator isn't sexy, nor does it have a "control panel" with digital displays.  No one will "Oooh" and "Aaaah" over it when they visit your kitchen.

But then again, nothing will ever go wrong with it, either.

The reality is, you won't get a better refrigeration experience from a fancier refrigerator.  It won't be easier to use or more convenient or any of that shit.   Rather, you will spend a lot of money for an appliance you may have for 10-15 years, and the more you spend, the more likely it will break sooner.

You just end up spending more money and achieving nothing of substance.

We've had a number of different kinds of refrigerators over the years.   As I noted in one post, we owned 11 at one time (all at once!) and the simplest kind worked the best.

Side-By-Side refrigerators were all the rage in the 1970's.   One advantage of such refrigerators is that the doors don't open into the room so much, so in a compact kitchen, it is easier to use.   However, when you open the freezer side, all that cold air sinks right out.

Ice and Water Through-the-Door sounds really cool and convenient until you've owned a couple of them.  The problem with the Ice-Through-The-Door is that the mechanism takes up a lot of freezer space.   Another problem is that many of the dispensers eject ice cubes at such a velocity that they jump from your glass and skitter across the floor, which creates a real mess.   The "drip tray" is not plumbed, so you have to empty it periodically and it is a mold and mildew nightmare.

It really isn't more convenient that just opening the door and grabbing a couple of ice cubes.

The Ice-Through-The-Door issue gets even trickier with a 2-door (traditional) or 3-door (fancy) refrigerator, as the Ice has to go through the refrigerator portion of the door.   So the mechanism has to have a refrigeration device to freeze the ice in the refrigerator compartment, and this means that the door is pretty much taken up with the ice-through-the-door feature.   You lose a lot of storage this way.

So, you are not missing anything by not having "Ice Through The Door" and in fact, early 3-door models didn't even offer it (which was a throwback to the days of the built-in icemaker in the freezer).

Obviously, we are not going to throw away our refrigerator just yet.   We've had it about eight years and hope to get another eight out of it, at least.   Design life of most major appliances is about 15 years.

But if we had to replace it, I might think seriously about buying a simpler refrigerator for a lot less money.

Now, I know what some Yuppies will say, "But Bob, you have to have a fancy refrigerator for resale value of the home!   You need a fancy kitchen in order to sell the house!"

This is true and false.   Yes, it is nice to have fancy shit when you are selling a house, because the clueless masses like that crap.

But if you are selling a $400,000 house, a $1000 refrigerator isn't going to be a deal-breaker.   Chances are, the new owners will do-over the kitchen anyway.  I've seen people remodel their kitchens to "sell the house" only to have the new owners throw brand new appliances and cabinets in the trash.  People are wasteful.

But the point is, appliances are wear items, like shoes, and after a while they need to be replaced anyway.   You can spend $1500 on a fancy refrigerator and get maybe 10 years out of it, before the expensive control panel breaks, or spend $399 on a simpler model that lasts for 20 and gives you no trouble.

As I noted in my Membrane Switch Appliance posting, the problem with "fancy" appliances is that these computer control panels wear out from physical use.  The "off" button is usually the first thing to go, and once that is shot, you have to replace the entire control panel - which is usually more costly than a simple basic stove or refrigerator.

And with other appliances, going "upscale" does not always mean you get better performance.   A basic electric range with the old-fashioned coil tops is going to work as well as,  if not better than a fancy "glass top" range.   In fact, a cheap gas range will beat any electric range out there, if you are a serious cook.   And expensive "commercial grade" ranges are often worse than a cheap gas range, for home use.

The same is true with washers and dryers, dishwashers, and any other appliances.  Cheaper is often better, more reliable, and easier to use.   These fancy new front-loader washers and dryers do use less water, but they cost twice what an old top-loader GE would cost, and usually break down and are expensive to repair.

The GE washer?  If it breaks, you haul it to the curb and buy another one.  Done.  Simple.  Cheap.  And it washes clothes just as well as the fancy front-end loader, without the mold and mildew problems.  The cited article bemoans that Americans may be tempted to go back to "energy wasting" appliances as a result of the class-action lawsuit involving front-loaders.   But is the amount of energy really that significant?   Or more succinctly, does it pay back a $500 to $700 delta in price over a "regular" washer and dryer?

(And while we are on the subject, why are the base stands for these front-loaders so obscenely priced?   A simple drawer that you can mount your LG washer on costs more than a plain-jane GE washer does, period.   People pay more for an empty box than for a whole appliance!).

Dishwashers?  Same deal.   We had an expensive old-school commercial-grade Kitchen-Aide (back when they were commercial grade and not just re-branded Whirlpools or whatever).   It leaked.  It was noisy.  It died after less than a decade.  We replaced it with a cheap Frigidaire that we bought used for $75.

Sometimes less is more.  In fact, most times.

I think I have learned the lesson.   I am in no hurry to buy "upgraded" appliances anymore.   When the stove breaks, I'd rather buy a plain gas model than a new electric "glass-top" one.   (Speaking of which, slide in stoves are also a popular feature, but since they are a "special order" item, they often cost far more than the "regular" kind.   Also, since the controls are on the front, they are more hazardous, as small children can reach them and turn them on).

Fancy appliances exist for one reason only - to stoke the ego and allow people to "show off" wealth to their friends and neighbors.   "Look at me!" they say, "I have a fancy refrigerator!  Let me show you all the neat toys it has!"   And yes, I have been treated to this demonstration on more than one occasion.

But like the electronic gizmos on an old Cadillac, most of this crap breaks over time and is expensive to fix.  And when that happens, you realize that the main thing you want from a refrigerator is for it to keep your food cold, with a minimum of fuss and cost.

Lesson learned.   Now pardon me while I go throw out a refrigerator-full of food.