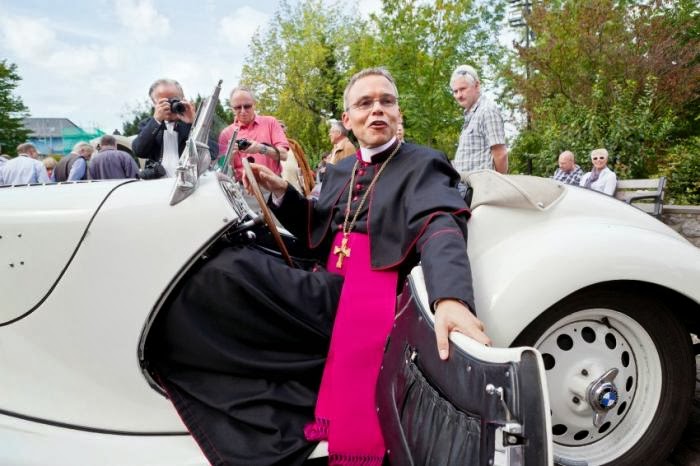 Church Bling is nothing new.

Recent reports about the excesses in the Catholic Church are giving many pause.  The Archbishop of Atlanta built a $2.2 million home in Buckhead, using money earmarked for "Charity".   But no one can top the fellow above (in a vintage BMW 328 roadster) who spent a whopping $42 Million remodeling his house and "offices".

People are acting all appalled, but when you think about it, Church Bling is nothing new.   And one could argue that without Church Bling, some of the greatest works of art of all time, including the Sistine Chapel, would never have been created.

But arguably, art and cathedrals are public works, available for everyone to view, and thus are for a greater good - not for private use.

On the other hand, excessive salaries, elaborate homes, private jets, and the like, seem somewhat inappropriate for a "Man of God" who claims to be the "Shepard of his Flock".   Yet many churches have been doing this for years - particularly the evangelical type.  Remember Jim and Tammy Faye?

But Church Bling exists on a smaller scale as well.   Here on the island, we have a number of churches, and most of them own a home as well, which ostensibly was for the pastor to live in.   As most of the churches have tiny congregations (a few dozen, at best) most have moved to a part-time pastors.   But the houses remain.

Some, no doubt, were donated to the church by congregants, in their wills.   What does a church want with a house that is not used?   Well, some, like the Methodists, are pragmatic, and rent out the house and then use the money for the church - to help pay the light bill or whatever.   This seems like a logical idea.   Selling the house would be another - and using the money to improve the church.

Others, like the Baptists, decided to keep their house as a private clubhouse for a weekly party - er, I mean, prayer meeting, which for some reason, cannot be held at the church or in the meeting hall attached to the church (isn't that what a meeting hall is for?).  They pay insurance, utilities and maintenance on a separate home, just to use as a once-a-week meeting place, in addition to the church itself.

So, a $400,000 asset, which is now tax-free, sits vacant for six days a week, and on Saturday, they all park on the lawn and have a little get-together until late at night.   Because that's what a church is all about, right?   Having a private little club that you can get together with, with your friends.

Others have this weird idea that a church should be all about God.  Or maybe helping the poor, or maybe spreading the word of Christ.  For others, it's board games and refreshments.  They also serve the Lord, who play Parcheesi.

One of these "church ladies" came to our garage sale.  The "church clubhouse" is only two doors down from us.   She mentioned she was with the church and that they held their weekly "meetings" there on Saturday night.  "I just wanted you to know we're here," she said, in somewhat ominous tones.  Sort of a "watch your shit, buddy, we're keeping an eye on you!" kind of statement.

But sadly, that sort of attitude reflects how most people view their religions - as a private club that only they can join, because they have the inside track to God, and God likes them best!

This is why, for example, many churches are not evangelical, as they really don't want new members, but prefer to isolate themselves in a contained social group.   New members would threaten the social structure of an existing church.   You know, people like Edna, who would come in with all her wacky new ideas which would need to be shouted down.

And that is why church attendance is down for most major religions.   People just don't want to go anymore, and when they do go, they don't feel welcome.   "This is our private little God club" the members say, "Go away!"

And increasingly, people question what they are giving their money to.   When a Bishop spends $42 million sprucing up the house, you have to ask yourself, when you can barely make your mortgage payment, whether you should "tithe" 10% to the church.

The new modern Mega-Churches at least spend their money (most of the time) on infrastructure that serves the congregation.   These Mega-Churches and their attendant bookstores, coffeehouses, meeting rooms, and the like, provide things like day care, AAA meetings, counseling, and activities for parishioners, in addition to church services.

But you have to wonder, is building a $20 million church to do this, really serving God, or just creating a really cool clubhouse for the faithful?

God doesn't want your money, that's for sure.  He can't spend it.   I suppose he appreciates a fancy cathedral or some really amazing church art.   But private clubhouses for the elite?   Probably a bad idea.
Newer Post Older Post Home