The Non-Linear Nature of Compound Interest 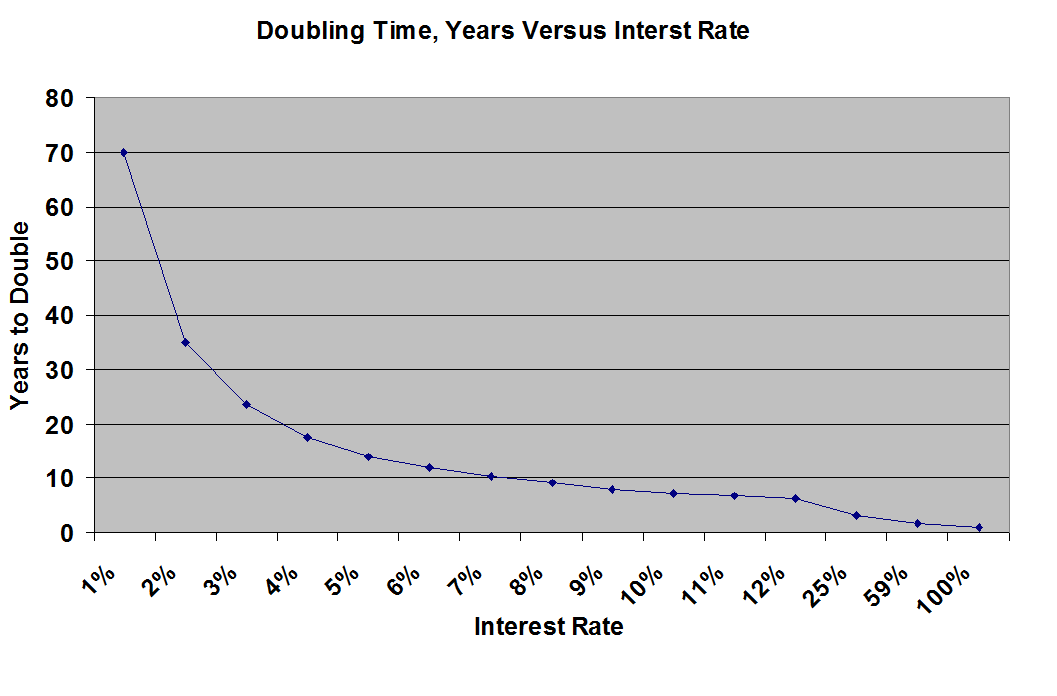 Interest does not behave in a linear fashion.   Rather, it has exponential qualities.
Click on chart to enlarge.


In an earlier posting on the Future Value (FV) of money, I listed how long it takes to double the value of money at a given interest rate.


Using our compound interest calculator, we find that, at:

But that is not the case.  As the chart above shows, the number of years it takes to "double your money" at a given interest rate is a decaying exponential, and small changes in rates in the 1-3% range make a huge difference, whereas the 4-7% range is pretty flat.   This puts today's super-low fractional interest rates in perspective.   0.5% interest is like no interest at all.

The above chart illustrates how interest rates affect your rate of return when investing money.  Borrowing is a slightly different animal.

In theory, when borrowing, you might pay less interest than you would, say, earn by investing the same amount.   When you invest $100, it stays $100 throughout the term of the investment.   But when you borrow $100, the balance declines over time, so the interest declines as well.

However, when you borrow money, the most interest is paid at the beginning of the loan (when the balance is high) and less and less until the loan is paid off.  Again, this is a decaying exponential.   And it illustrates why, if you continually refinance your home, you are just paying interest on a loan and never paying off the principle - and you make bankers very happy.

This is not to say that all refinancing deals are bad.   If you are locked into a high-rate loan, and can reduce the rate, while not adding on to the number of years, you might come out ahead, over time.   But, if like most of us, you reset the 30-year clock and then use the refinance to pay off other bills, well, you are just screwing yourself, over and over again.

As with investing, when borrowing, small changes in interest rates make huge differences in how much interest you pay.  Say you have a $5000 loan, and you pay $100 a month on it.   The chart below shows how many months it will take to pay off the loan, for a given interest rate. 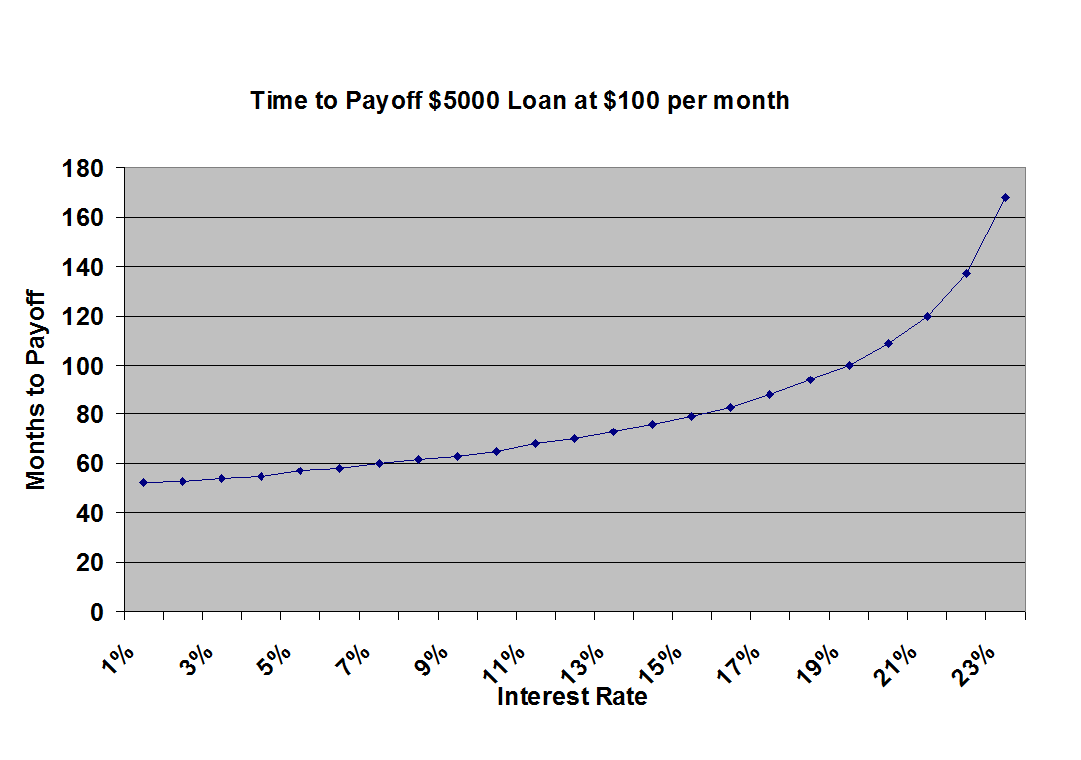 
Note that after 23%, the chart stops, because that that point, the exponential goes to infinity and you would never pay off the loan, at that interest rate, at $100 a month.  This illustrates how payday loans and "penalty interest rate" credit cards can work to intentionally ruin a person.   Once the interest rate goes beyond, say, 20% or so, the borrower has to pay more every month, if they ever hope to pay off the debt.

However, since incomes are finite, it is a predictable event that if you give a high-interest loan to a person on a fixed income, you will eventually bankrupt them.   There really is no other way out.

Again, look at the lower part of the chart - in the 1-10% interest range.   You can pay off that loan in about 60 months or so, at $100 a month, with no problem.   Above 10%, well, it gets dicey and the loan term starts to stretch out - literally (and I mean "literally" not how people overuse that term) to infinity and again I am literally meaning infinity not using dramatic language.

So what does this all mean?

Well, it pays to understand how interest works.   And most of us don't.   I know I didn't really, particularly back in the 1980's when I signed 12% mortgages and 16% car loans.   A few points in interest can nearly double the amount of interest paid, over the life of the loan, if you get up into the "teens" in interest points.

But most folks don't see this.   And in an era of 0.5% CDs and 0.1% government bonds, it is scandalous that banks are offering credit cards at 14% to 22% interest rates.   I just got two such offers in the mail - and they went right into the trash.

But many folks bite on such offers, convinced they are going to "make out" on airline miles or rewards points.

The reality is, if they ever run up a significant balance, these high interest rates will make it impossible for them to ever pay back the loan unless they can somehow come up with hundreds and hundreds of dollars in extra payment amounts, every month.   Since income is finite, this is very, very hard to do.   Bankruptcy is not just a possibility, but an inevitability.

On the other side of the coin, as an investor, you have to go out and seek some plausible rate of return on your money - on the order of 4% or more, preferably 7% or higher - at least when you are young and can afford to take risks.   Time is on your side, and you can easily double your money in a few years by investing some of it into some risk-taking ventures.   Putting your money into passbook savings only insures that you will fall behind as it won't even make a return that keeps up with inflation.

Regardless of whether you are borrowing or investing, bear in mind that interest is not a linear equation, but rather an exponential one.   Small changes in interest rates can cause huge swings in the resultant rate of return, or how much interest you pay.