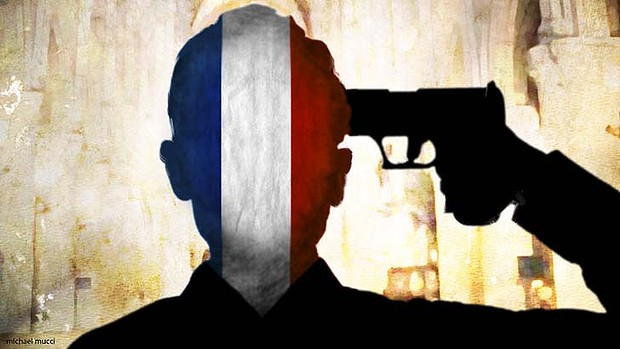 The French supposedly have one of the highest suicide rates in Europe, what's up with that?

A recent article discusses a wave of suicides at the French telephone company.  France has one of the highest suicide rates in Europe, we are told.   What the heck is up with that?

I mean, you live in France, for chrissakes - home of wine and cheese.   How bad can life be?

You see, the perception that most of have of France, is a place where carefree workers in a quasi-socialist economy, pedal home with a loaf of French bread under their arms, and drink an entire bottle of wine for lunch (hmmm.... sound like my life here on Jekyll Island).   They eat great food, drink great wines, and of course have wild sex all day long - with their wife or mistress - or both.

But that is just an image, not the reality.

We recently rented a canal boat in France and got a chance to see some of the most beautiful parts of the country - and some of the ugliest.

Unemployment is a problem, particularly among youth.  And alcohol and drug addiction are also and issue, as is youth crime.   We literally had to chase 14-year-old kids off our boat, as they tried to steal shit, not for any particular need, but out of boredom.

Yes, they have a pretty good standard of living in France.   But they also have no challenges, no purpose, to meaning to their lives, in many cases.   And as a result, people get depressed, even (or especially) kids.

And in a quasi-socialist economy, losing your job is a big deal.   You go to work for a company, stay for 20-30 years, and then retire with a fat pension.   Sort of like how America used to be back in 1966.   And if you lose your job, well, you are properly fucked, as you have to start over with another company, which is hard to do, once you have been fired.

Here in America, we take a slightly different attitude toward work.   We work harder, struggle more, and perhaps as a result, are happier people.   When you have to fight to survive, you have more self-esteem than when you have things handed to you on a platter.

And if you lose your job, well, you have survival skills, and rather than killing yourself, you just shrug, give your former employer the "Fuck You!" and move on.   We are less dependent on the teat of Big Government and Big Employers than the French.

So maybe that explains the suicide rate in France.   Or maybe not.

Maybe the whole "French Suicide" thing is a bit over-stated.   The suicide rate in France is about 14.7 per 100,000 people.  In the United States, it is about 12.   Really, this is within the range to statistical deviation, not some alarming trend.

Once again, however the United States is falling behind the rest of the World!   Heck, Japan is right up there with a 21 (How's that for Japanese Efficiency?) and China is at 22.23 (those Chinese, always showing us up, with suicides, or with executions!).

I mean, come on people, are we going to be shown up by the rest of the world!  Get to work here!

We're even being shown up by a bunch of third-world countries.  Hell, we've got nothing on Lithuania (31.0) or Greenland (a whopping 83!).   Clearly the French - or us Americans, have little to bitch about.

But what about the countries with the lowest suicide rates?   Ahhhh, here's where we realize that cultural differences and methods of reporting can really skew statistics.

Nepal?  With a 0.0, I guess all that Buddhist Voo-Doo Shit must actually work.  Everyone is tranquil and happy there!

But Haiti? (0)  Egypt? (0.1)  SYRIA???? (0.1)  Please, be serious!   No one is rushing to go live in those countries.   Or perhaps there are so many other causes of death in those countries that no one has time for a Suicide.   If you want to "off" yourself, you just walk outside and wait for the inevitable.

But again, the reality is, the Bureau of Specious Statistics is once again hard at work.   These numbers are not accurate, nor indicative of any trend.   Despite numerous articles to the contrary, the French are not statistically more likely to "off themselves" than anyone else on the Continent.   And cultural effects in reporting suicides affects why various countries have different ratings on the chart.

So, I have to put down the "French Suicide Crises" as a load of hooey.   Sorry.
Newer Post Older Post Home