Anatomy of a Bad Deal 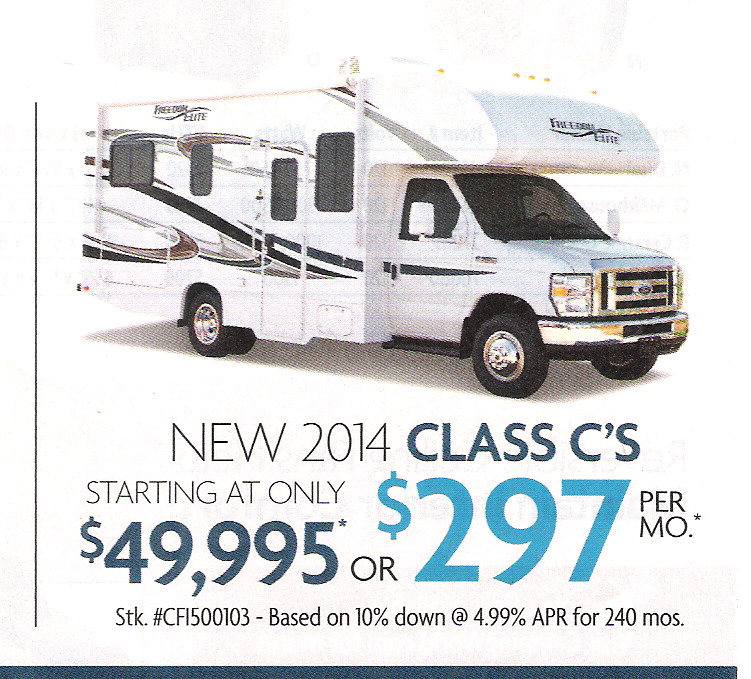 Deals like this are how the middle-class gets into trouble.


I was reading the Good Sam catalog the other day, and saw this deal proffered for a low-end Class-C motorhome.   I nearly fell out of my seat.

To begin with, there was a mountain of fine print under the deal - that things like shipping, taxes, and the like were not included.  So getting the $49,995 price (let's just call it $50,000, OK?) was probably not in the cards.

But even assuming it was, well, with a 240 month loan (that's TWENTY YEARS, folks!) the purchaser would surely be upside-down for most of the loan.   And the vehicle would likely not outlast the loan.

This handy loan balance calculator tells the sorry tale of this bad deal:

And in the interim, the options for the owner are not many.

This graph (click to enlarge) shows how much interest you will pay over time.


For a wealthier person, this is not an issue.  They just pay cash for the motorhome, or put more of a down payment on it, so that the loan balance is always ahead of depreciation.   But for the "monthly payment" mentality type of person, well, such deals are attractive, as they look only at the monthly payment, and nothing else.

After five years of owning it, we sold it for $11,000, or about half what we paid for it.  And over time, it started to leak and delaminate.   The rubber roof needed work, and the bathroom needed a complete overhaul (which we did).   I had to replace the generator as well.  It cost a lot of money to maintain, and it was not very well made.   That is the dirty little secret of the RV business - these things are stapled together with sticks of wood, and they look nice when new, but quickly fall apart over time.

And 20 years?   For a typical motorhome, that is about the entire design life and then some.   By the ten year mark, many motorhomes are starting to look a little tired.  By the 15 year mark, they are pretty much worn out.   By 20?  They are ready for the junkyard.

Think about it for a second - would you buy a car on a 20-year note?   What makes you think a motorhome will outlast a car?   It simply won't.

Note also how much interest the buyer pays - over $25,000 over the life of the loan, or about 50% of the purchase price.

So, what happens to people who make deals like this?   Well, theoretically maybe one or two make out OK, provided they put the motorhome in a garage or barn when not in use (and not a barn with barn swallows pooping all over it or anything) and keep it in pristine condition and use it every year and enjoy it.   Even then, they are paying a lot of money (more than $3500!) to go on vacation every year.

Or, if they have money, they can sell it when they get bored with it - and pay the difference between the sale price and the loan from their savings.   Sadly, most people who bite on deals like this don't have $10,000 to $20,000 laying around to pay off upside-down loans.

And the more you actually use the RV, the worse it gets, in terms of depreciation.

For the rest of them, well, the motorhome sits in the side yard, degrading.  They lose interest in RVing, particularly after it breaks down.   Since they are "stuck" with the unit, they just let it sit in the yard for 20 years and pay off the loan.    Or their children sell it when they die.   And you might think this sounds absurd, but there are moldering RVs in people's backyards across America, simply because of deals like this.   My neighbor in Virginia had one - covered with algae and mildew and slowly sinking into the lawn - for over a decade.

Or you can let the unit be repossessed.  However, that still leaves you on the hook for the balance on the loan (minus what the unit sells for at auction).  Bankruptcy is the only way out of that mess.

How do you avoid a deal like this?   Make a bigger down payment.   Go to a shorter loan term.   Buy a used unit and pay cash.  Buy a trailer and tow it with your SUV or truck.  Trailers are much cheaper to buy and depreciate more slowly than a motorized RV.

While loan companies may offer you deals like the one above, you don't have to take them.   And just because they offer you a deal like this, doesn't mean it is a good deal or that you can afford it.  The name of the game today is not to offer sound deals to people, but rather to set up deals that intentionally ruin folks over time.

Sadly, many people end up with worse deals than this, as they don't qualify for the 4.99% interest rate, because their credit is already bad - having bitten on bad deals in the past.   So they end up paying even more in interest and end up upside down in an even worse way.

It is sad to me that after the excesses of the 2000's - where banks loaned money to people knowing they could not pay it back, we are right back where we started.   And it seems no one has learned anything!
Newer Post Older Post Home