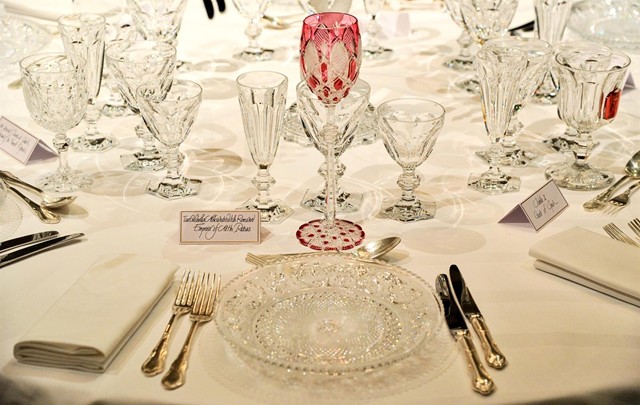 Until about 50 years ago, a middle-class or upper-middle-class bride would register her silver pattern, china pattern, and crystal pattern, when she got married.   Guests were expected to buy a place setting for the bride.   Today, brides register for a flat-screen television and a microwave.   What changed?


If you say "Crystal" today, most folks will think you are talking about a kind of overpriced champagne, or perhaps "Swarovsky Crystal" - the latter being a kind of cheap costume jewelry we used to laugh at, back in the day, as the height of tackiness.   Today, ironically, tacky and cheap is seen as the height of luxury.

When I was a kid, Mom would get drunk and start playing with her wedding crystal.   She'd pull out a piece of it and say, "you can tell this is good crystal, as when you tap it, it rings".   Today, I have a few pieces left that are not chipped or cracked.   We use them as everyday glasses.   No one registers for a china, crystal, or silver pattern anymore.

We attended a friend's wedding, where she registered for her crystal pattern (Waterford), silver (Gorham) and china (Limoges).  We bought a place setting of china as a gift.  We were the only ones.   The rest of the guests gave kitchen or bath gadgets, or small electrical appliances, none of which the bride registered for.   It was very odd - people today just don't understand how weddings were supposed to work.

What happened?  The answers, I think are multifold.

To begin with, no one has dinner parties anymore - at least not sit-down service for 12, like at Downton Abbey (I toss in a trendy cultural reference for you plebes out there).   People simply don't know how to cook and entertain.  Few even have a dining room table large enough.  Today's idea of a dinner party is a buffet with people eating off paper plates in the living room, or standing up in the kitchen.   It's pretty gross.

The cost of silver is partly to blame, too.  In the 1970's, when silver first shot up in price, many brides started deciding to do without a silver pattern, as it was just too much to expect a wedding guest to pony up that kind of dough - or to have Mom and Dad pay for it.

The lack of servants, of course, is the other problem.   Silver takes time to polish and every time you use it, you have to polish it.   When you live in a mansion with servants, this is not an issue.   You beat them and they polish your silver.  Problem solved.

Today, people don't have "time" to hand-wash crystal and china (and hand-dry it) and polish silver for hours.  It is just too labor-intensive.

But I think another factor is the look and how technology has changed our appreciation of these things.   Back in the 1800's, having shiny silver pieces that you could see your reflection in was a big deal.   There was not a lot of technology that did this - no chromium, no mylar plastic-coated mirror-finish films.   You wanted shiny, shiny bling on your table, well, you had to pay big bucks for silver.   Recall that Paul Revere, the revolutionary hero, was a silversmith.  People had silver back then - not so today.

Today?  We have stainless steels, chromium, and even plastics that are shinier than silver.  The allure of shiny silver is no longer what it once was.  The "wow factor" is gone.

And the same is true for crystal.  You wanted a clear glass with an interesting cut pattern and no bubbles and nonsense, you bought high-end crystal.  This set you apart from the plebes in town who drank from pewter or blown-glass.   But in the late 1800's, pressed-glass came out that  mimicked the look of crystal, for far less.  Suddenly, spending a lot of money for a "look" that could be cheaply copied, didn't seem like such a swell idea.  People like my mother would start "pinging" their glasses to show they were real crystal and not some knock-off, as the differences became harder to tell.

(When cleaning out the in-law's house last week, we found two sets of glasses - one crystal, and one from the local grocery store, from back when the grocery store gave away glasses as a promotion.  The patterns were identical, but the grocery-store glasses, were of course, pressed glass.   Up close you could tell the difference, but from 5-10 feet, it was much harder to do.   And in fact, some of them almost got mixed together by accident.   It illustrates how technology changes our appreciation of these things).

Simply stated, we live in a manufactured age, and the thrill of seeing something shiny and reflective is not what it once was.   You don't need polished silver to get that effect - even disposable flatware comes with a mylar reflective finish these days.

Shiny and glossy and mirrored, today, is seen as cheap and tawdry.   The hall of mirrors in Versailles was the height of fashion back in the day.  After all, mirrors were rare and expensive.  Today it looks as tacky as Liberace's bathroom.  Our tastes have changed as technology has changed.  Maybe that is why people give electrical gadgets as wedding gifts now.

When my sister got married in the late 1970's, she had a china pattern, but no silver and I am not sure she had crystal.   Her children?   The only crystal they might have is the meth variety (just kidding, but a good play on words, no?).   Most people today "register" for appliances and gadgets, not silver, crystal, and china patterns.

In a way it is a shame, as it is sort of the end of an era - an era where people used to entertain at home formally - and would "dress up" for a dinner party with elegant crystal, china, and silver, and try to maintain a certain standard of decorum.   Today, we can't be bothered with that.  Today, we eat as though we were at a child's birthday party.

To be sure, there are some advantages of our more modern way of living.  We are more informal, and as a result, more egalitarian.   You no longer are judged by your china pattern, but by the size of your flat-screen television and leased Japanese luxury car.

And yes, the very rich still have their crystal, silver, and china patterns - and always will.   And perhaps that is the way it should be.   After all, these once were the trappings of wealth, and it was only during the last 100 years or so that the middle-class and upper-middle-class thought they could buy their way into society with these kinds of trappings.

For us, we have some hand-me-down crystal, china, and a few silver pieces and flatware, from grandparents and parents.   Enough for a table of 12 (if we mix the crystal), and a table (also inherited) large enough to put them on.   It is a nice form of decadence, but if we had to pay cash ourselves for this stuff, well, maybe we might have something different.

And we use this stuff more than most folks, but even then, it is a very rare occasion.   Quite frankly, without servants, putting on such a dinner party is an exhausting affair.   And the servant problem doesn't seem to be improving anytime in the near future.

Crystal, China, and Silver - not what they once were.  It is an end of an era.   And I think few people have noticed.

UPDATE:  I forgot to mention linens!   Every proper bride and housewife had linen tablecloths and napkins, preferably Irish linens.   These were ironed flat and used for special occasions.

When I was growing up, before my Mother lost her mind and my Dad spent his Sundays with his mistress, we had "Sunday Dinner" after church, with all the linens, china, crystal, and silver, and the whole family gathered around the table, a la Normal Rockwell, for chicken, turkey, a roast, or lamb chops (the latter served with mint jelly dispensed from a tiny cut-crystal bowl.

Like I said, that was before Mom went insane.

Today, I know married couples - even those with children - who all eat separately.   Mom thaws something out when she gets home, while Dad nukes a "hot pocket."   Junior is in the basement watching TeeVee, drinking Pepsi and eating Pizza and microwave popcorn.

While I don't lament the passing of the Norman Rockwell era (if it indeed, ever existed) it would seem that today, we have gone too far in another direction - people just grazing food from the fridge and microwave, with the idea of a "meal" becoming more and more alien.

Eating in front of the TeeVee - or the computer - is a very easy habit to fall into.  It does take some effort to prepare food on a plate, sit down, and eat together as a family unit.   It is, however, more satisfying.