Why Cruises are Idiotic 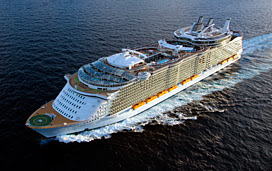 What other form of vacation relies upon trickery?  Besides Disney, that is.

A recent article on "Cruise Critic" inadvertently illustrates why Cruises are Idiotic.  The article lists all the "Secrets the Cruise Line Doesn't Want You to Know!"

Here's a "secret" the article missed:  Don't bother wasting your money on a cruise.   You can vacation and actually go somewhere for far less than the cost of a cruise.

And as I noted, if your idea of a vacation is being trapped in a shopping mall with a lot of pushy people from New Jersey, well, a cruise is your ticket.

On the other hand, if you want to sit on a tropical beach and sip drinks all day, you can just fly down to some tropical beach (or even drive) and do just that, for a fraction of the cost.

Cruising is all about being on a cruise ship.   Some hard-core cruisers (and we know several) don't even go ashore, but rather spend the entire cruise on the boat.

They will go on cruise after cruise so that they can build up "points" and thus get some special secret dividend, like a free drink on the lido deck, behind a velvet rope, so that they can lord over the lesser folks who aren't "in the know."    It is human nature to hoard secrets and to want to be one of the "informed" - whether it is cruising or spreading bad e-mail hoaxes.

And the hard-core cruisers will bore you for hours with the little "secrets" to cruising.   Their idea of a "relaxing vacation" is finding some little "trick" to squeezing out an extra ounce of liquor from the cruise line, or finding a way to avoid standing in a line with thousands of other people.   Usually these "secrets" are anything but, and since everyone knows them, well, they don't save you much time or money.

It is like stock tips on the television.   Shhhh!  This is just between you and me and 300 million other people, OK?

How dumb can people be?   DUMB!

Our first cruise was OK, being three days long, but I felt trapped in a mall or a hotel - where I could only do things according to certain rules, and everything I did incurred a fee, or so it seemed.  It was OK as we were on a small ship and it was only for three days.

Our mistake was going back on the largest cruise ship on the planet for a week, and we were indeed trapped in an expensive trap that looked like a tawdry casino or mall, and sadly, thousands of pushy people were there with us.   Never again!

Well, maybe a repositioning cruise.   I do like to put my finger in the light socket again and again, don't I?

But getting back to cruising, the "secrets" effect is not exclusive to the cruise industry.  People who go to Vegas or Disney do the same thing.   They will tell you there is a "secret" or "trick" to having a good time, that you can avoid lines and get a "freebie" if you only know the inside track.

Howabout this?   How about a vacation being a relaxing time where you actually enjoy yourself as opposed to being some stupid collection of tricks and insider information?

Just a thought.   If you really want to sit on a beach and sip cocktails, fly to some Caribbean island, stay at a resort, and have then bring you one Mai-Tai after another, and just enjoy being there - as opposed to be locked in a ship with the Norovirus and backed-up plumbing.

So, you want a "secret" tip to cruising anyway, right?   OK, I'll give you one that is not on the list.   Wear something nice.    Yea, I know, you all believe that wearing sweatpants everywhere is the "secret" as you are "comfortable" and can sweat and fart with impunity.   But it makes you look like trash.

Wear a nice shirt (like a real silk Hawaiian) and a blazer.   It never hurts to look good.   We did this and ended up being pulled out of the endless lines (at the airport and at check-in) as the staff merely assumed we were "diamond customers" or whatever, merely because we didn't look like the sweaty masses from Jersey, all dressed for the gym.

So there's my secret.  Try to have a little class.   You'll be the only one on the ship doing it, trust me.
Newer Post Older Post Home