The Value of Things 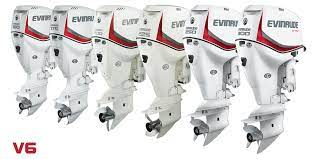 The value of an item is predicated on what a person wants to pay, not on how much it cost to make or some other criteria.  This creates a difference between value and cost, which can either drag you down or make you rich, depending on which way you want to play this.  These Evinrude outboard motors may look alike, but they each are rated at a different horsepower (from 150 to 300) and have different retail prices, even though the cost of production is largely the same.


I lambasted an old friend of mine in an older posting when he said (while trying to sell his boat for $3000 over market value), "It has been my experience that what something is worth is what someone is willing to pay."

That is a ludicrous statement and at the same time, a nugget of wisdom.  The problem for him, of course, is that what "someone is willing to pay" is pretty much tracked by the NADA Used Boat Pricing Guide, and unless you can snooker someone into paying too much, the odds of getting substantially more than book value are nil.

You see, the problem is, these guides are available for everyone to read - today online.   And even in the past, when it was harder to access Blue Book or NADA data, you could pretty much parse out what something was worth by what others were charging for the same fungible commodity.

So, when your boat is advertised for $11,000 and everyone else lists theirs for $8000, chances are, you are overpriced.

But his statement had a nugget of truth to it.   What something is worth is what the market deems fit to pay.   And this valuation is independent of the cost of production or whatever.   So, for example, even though my friend paid $20,000 for the boat, after several years, it was worth only $8,000 as the "market" deems it to be that much more worn out, prone to repairs, or whatever, and valued less.

You might argue it is an irrational judgement, as the boat may be in perfect condition and provide many hours of good service - perhaps moreso than a newer boat.   But valuation and reality are often two different things.

Take, for example, stock prices.   In a rational market, stock bubbles would never occur, as everyone in the marketplace would evaluate stock prices rationally, by looking at the earnings per share, dividends paid, and other numerical and technical criteria (including the perceived future value of the company, based on products in the pipeline, or whatever).

Rather, as fallible human beings, we tend to treasure trash and trash our treasures.   We think junk is worth keeping, while throwing away things of value.   We keep an old cardboard box on the premise that it might be useful, while trading in a 3-year-old car on the premise that is "worn out."   We let our emotions get in the way of our thinking, and thus place wrong values on items.

My friend with the boat didn't want to "lose money" on the sale of his boat, and felt he was entitled to more than it was worth (I have friends with old cars who think the same way).   They want to "win" for emotional reasons, and end up losing as a result.

With investing, the same is true.   We hang on to that "dog" stock, hoping it recovers in price, until we can sell it and "break even" - even though the years required to "earn our money back" would have been better spent by selling the stock at a loss and investing in something else that would pay back far more quickly.

We also tend to fall for hype and excitement.   Whether it is railroad stocks, beany babies, houses, gold, tech stocks, or even tulips in Holland, people have let their greed get the best of them and paid far too much for investments that a few months later, turn out to be worthless.   Our skills in valuating things are very poor indeed.

With consumer goods, the same is true.   Most of us wrongly assume that the cost of a consumer product equals the cost of producing it, plus a "nominal profit".  This is rarely the case.   Take cars for example.   Toyota makes a car in two guises - as an Avalon, and as a Lexus.   Both are the same car, underneath.   But for some trim options and gadgets, as well as the shape of the headlights and taillights, both are the same car.

But one is valued thousands (or tens of thousands) of dollars more than the other.   The cost of assembling both vehicles is about the same - they have the same number of parts, require the same amount of labor.

Now granted, maybe the Lexus has nicer leather, but the delta in pricing doesn't justify this trivial parts cost.

Perhaps a better example is outboard motors.   When I was a youngster, I had a ski boat with an 85 HP Johnson on the back (back then, that was considered a powerful boat!).   The same V-4 engine was sold in 85, 100, and 115 horsepower versions, each at a separate price point.   I had ordered the service manuals for the engine, and they had exploded views of all three models.  The only difference between then was in the shape of the crankshaft, the size of the pistons, and some adjustments in carburation.   And these differences did not cost the manufacturer anything, either.   They were just differently shaped parts.  The labor cost in assembling all three engines was the same.  The parts cost was identical.   The sales prices varied wildly.

When I worked at Carrier, we did the same deal.   A water-chiller (a larger refrigeration unit used in office buildings) might be offered in multiple "sizes" based on tonnage of cooling capacity.   But the shape and size of the device in a certain range might be identical.   The parts count would be similar.   The labor cost would be the same.   But we weren't selling blocks of metal, we were selling tonnage of refrigeration.  You want more, you paid more.  And we made more money on the larger capacity units as a result.

For the investor and consumer, this means two things.   First, you can overpay a lot for your investments and purchases if you get caught up in the hype.   A $3 t-shirt made in Taiwan isn't "worth" $20 just because it says "Hollister" on it - unless you emotionally convince yourself that it does.   A tech stock that is hyped in the media isn't going to make you rich, even if you emotionally believe that it will.

Second, it also means you can score - and score big - if you seek out the undervalued investments and products in the marketplace.   Warren Buffett became a billionaire not by looking for "the next big thing!" in stocks and then buying some trendy over-hyped offering.   Rather, he looked for stocks of companies that were solid businesses, but perhaps were undervalued due to market perception - or maybe needed some tweaking in their operations.   He bought low and sold high - when people started to appreciate the valuation of the company.   He didn't hype the stock prices to the stratosphere through a pump 'n dump scheme.

Similarly, as a consumer, you can find bargains in the marketplace by eschewing the trendy and fanciful and by seeking out undervalued but durable products.  There is no money to be "made" this way (as opposed to finding undervalued investments) but it does stretch your income.    The media, for example, hypes a $300 Dell "Netbook" today as a good value, but you can buy (as I just did) a used 2-year old Toshiba laptop running Windows 7 Ultimate (the best Windows to date) and a real hard drive, for $150.

Sadly, most people in America take route #1.   They "invest" in hyped investments like tech stocks and whatever the shouting guy on television says to do.  They bought mini-mansions and condos as speculative investments, and then lost their shirts.  And when it comes to buying personal goods, they pay extra for status on the premise that they want to impress people they don't even know with their apparent wealth.  They spend more - and end up with less.

And after years of this behavior, they are broke and unemployed and angry and wondering whose fault it is.   Was it the big banks?  Those evil people on Wall Street?   Obama and his welfare friends?   Maybe those bad old 1%'ers!   Someone, after all, had to "take the money away" - right?

And sadly, these same people go back to the well, time and time again, convinced that "this time for sure" the newly hyped tech stock will make them rich, and that the luxury goods they buy are a "good value" as they impress others.

And yes, in the past, I fell for that sort of thinking - thinking that I could outwit the market by picking winners in the stock market - only to realize that stocks that I bought by mistake - or even when drunk - did better than my carefully thought out "strategic buys" on hyped stocks.  And yes, in the past, I spend way too much on "things" of brand name value, thinking that owning stuff equated to real wealth or that brand-name products were "better" than cheaper offerings, even though they were often the same product underneath the packaging.

But then I realized that real wealth was the ability to be able to say "fuck you" to everyone on the planet, including your employer and the government - and be able to support yourself.   To own yourself outright as opposed to chasing loan payments the rest of your life.

And it is possible for nearly anyone to do this.   It requires, however that you value your freedom more than a new Lexus, and that you treat money with respect, not as something to gamble with.   If you can cut your personal overhead by spending less and increase your savings so you can live without working, it is possible to be truly free.

Few choose to do so.   And it is funny, many brag about their enslavement as assume that it is inevitable.  I was on a "retire early" discussion group the other day and a person was agonizing about spending $1,600 on a fancy camera.   That is a huge purchase to make even for someone making $100,000 a year. I suggested that they look for a used camera and wait a year - if they really felt they "needed" this toy.   Others were like, "well, I'd just write a check - after all, what good is money if you can't spend it!" which is an idiotic thing to say, if you think about it.

Needless to say, I left that discussion group.   Most of the discussion seemed to be along the lines of how fast they could spend their retirement money on bling.   The "answers" provided to the poster were less than helpful.

But, that is the beauty of it all.  Most people are caught up the media hype and the consumerist bandwagon of spending.   You don't need to be a rocket scientist to get ahead in the US of A.

All you need to do is figure out the real value of things as opposed to society's screw-up valuations.