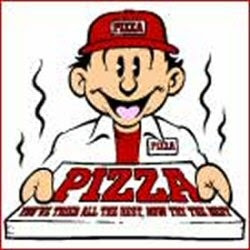 If you are desperate enough to work delivering pizzas or to work in a restaurant, One would think you would be careful with money.    One would think, anyway.

I could never quite understand this.   When I arrived at the place, with the pizza (which is bad advertising for the restaurant, if the workers there are sending out for food) I would ask them why they ordered a pizza, which cost about $15-$20 with tip.

"Don't they give you a free meal on your meal break?" I would ask.

"Well, yeah," they replied, "but sometimes its nice to have a change.   You get bored eating the same old thing!"

And for them, pizza was a big change.   How sad.

But I thought it was funny at the time.  I never did it myself, of course.  I wasn't delivering pizzas for funsies, but to make money.  And if the manager gave me a free slice, I certainly wasn't going to go out and pay money for food, particularly when I was making minimum wage as it was.

The poor make poor choices in every sense of the word.   Working at a minimum-wage job where you get a free meal, and then eschewing that free meal and spending money to buy one is one of those poor choices.   It is like squandering an hour of labor (if not more) for no apparent gain.

But unlike the other drivers, I wasn't delivering pizzas to make a living - as a career - but as a means to an end.   And that end was to finish my college degree and get a better paying job.   When you have specific goals in life, it helps to focus your mind - and your spending habits.

But others are less focused.   Life is just a series of strange events that "just happen" to them, and every day they wake up and ask, "Gee, what will I do today?"

And "treating yourself" to a meal or something special becomes part of this norm.   Why bother sacrificing for some future Valhalla, when you can have fun today?

And you see this all the time with the very poor.   They complain about "never having any money" and then you point out they are blowing $100 a month on Cable television and another $100 on a smart phone.

Their response is, "Well, Cable TV is our only luxury!   And you need a smart phone to communicate or in case your car breaks down!"

Funny how luxuries become necessities the poorer you are in America.

The "car breaks down" thing bears separate mention, as this lame excuse is used to justify all sorts of bad financial behavior.  Junior gets Grandma to co-sign a new car loan on the premise that "he needs a reliable car to get to work!"   Daughter gets Dad to buy a new smart phone, "Lest she be assaulted when her car breaks down somewhere!" (Of course, the irony is that cell phone bling will make you a target for crime, not protect you from it).

Now, bear in mind, I am not trying to be judgmental of the poor here, even if it comes across that way.   The poor will always be with us - and make stupid bonehead decisions that keep them poor.   There are very few smart poor people out there.   Most are just victims of their own obsessions and compulsions and lack of self-control.  And there ain't nothing we can do about that.   Giving money to the poor doesn't make them wealthy, for long.

No, the point of all of this is this:  You can make better decisions in your life, which will result in better life outcomes.     No, you can't be perfect all the time, and you will make bonehead decisions - we all do.   But the best thing to do is examine those decisions carefully and learn from them.  And sadly, today, the middle-class is rapidly falling down the economic ladder, one leased car and smart phone at a time.

Sadly, today, the norm is to make bad life choices and then blame others when things go horribly wrong.

You do have personal choices in life - no matter what the media says or your peer group says.