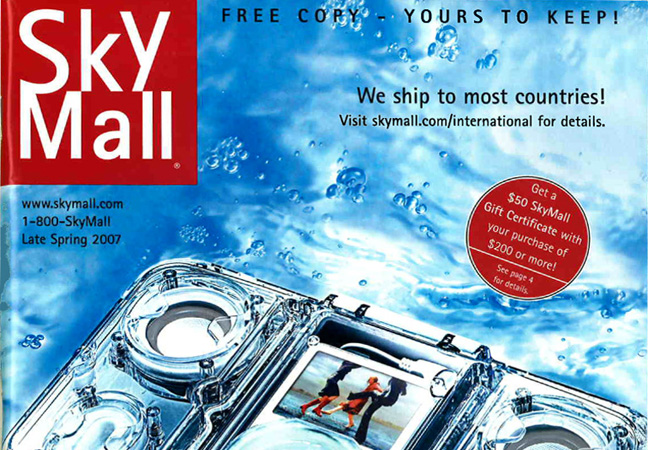 This is how middle-class people squander money.

The SkyMall catalog may be no more - morphing into an online store, according to one source.   That's too bad, as I had clients sell products on there.   And of course, it provided hours of endless amusement when you were on the airliner.   Who in their right mind pays $500 or more for a resin-plastic "Garden Yeti" or talking monkey head?

One of the items they regularly featured were "autographed collectibles" which usually included jerseys or whatever of sports greats, or autographed album covers of rock and roll stars.   Usually, these were enshrined in a glass frame, along with other memorabilia, such as tickets to a baseball game, or a program or whatever.

The thing that got me, while looking at these "collectibles" was, "Gee, how can they stock enough autographed jerseys to make this work?   I mean, the team players must have an assembly-line for autographing junk, in order to provide sufficient volume of product!"

And of course, as it turns out, my question was valid.

The dirty little secret of the "Collectibles" industry is that much of the "autographed gen-u-ine" articles, such as jerseys, photos, and baseballs, is just fake, fake, fake.

And even the "legitimate" autographed crap is pretty worthless, simply because it was autographed on an assembly line, and thus there are thousands, if not tens of thousands, of such "autographed memorabilia" out there, thus making them less collectible and less valuable.

Charles Mckay addressed this in his "relics" chapter of "Madness of Crowds".  Back in 1841, not many were clamoring for autographed Cricket jerseys.  The big ticket then was to get a religious relic - a piece of sand from "the holy land" or a supposed tooth or lock of hair from a saint, or even a real, gen-u-ine "piece of the true cross."   And of course, the Holy Grail was the Holy Grail of collectibles, although it is not clear that anyone found the real one, ever.

Ford's Theater, in Washington DC, was boarded up shortly after President Lincoln was assassinated there.  It remained boarded up for over 100 years, only being re-opened as a National Park monument in the 1960's (imagine that!).   Lincoln's clothing that he wore at the time of his death were, however, on display nearby, and in the 1800's and early 1900's, tourists to Washington DC thought nothing of clipping off a little piece of Lincoln's jacket or shirt, to take home as a "souvenir" of their visit.   The idea that these relics would eventually be cut down to nothing, apparently never occurred to most folks.

So the trend has been around a long, long time.   People want a piece of something historical - a memento or souvenir or talisman of a significant event or person.

But beyond that, people will buy things they perceive to be as rare or desirable.   I wrote before about the idiocy of Beanie Babies, which were "collectable" by the very dint of the manufacturer saying they were so.   The market peaked for these ugly little bears, and then crashed.   Lately, the company has gotten back into the game, as sufficient time has passed that the very poor (who buys junk like this) forgot how much Momma lost on her Beanie Baby "investment".

And the very poor (or middle-class poor) are the ones who buy this nonesense - often advertised in the back pages of Smithsonian magazine.   Collectible plates, collectible coins, collectible thimbles, collectible model cars - all punched out by "The Franklin Mint" (not affiliated with "Gov't Mint" or indeed, any government) are hawked to the poor and middle-class, who can easily be convinced that such tchotchke is a valuable investment.

And they think this, too.   I have been to more than one poor person's home, and show the precious family collectibles, including Elvis Plates, and told, in hushed tones, how valuable they are now - or will be.   These are the same folks who had cabinets of Beany Babies, all in their original boxes.   Why invest in stocks, when stuffed bears are a sure thing?

Why do the poor and middle-class do this sort of thing?   For the poor, the answer is easy - they really don't understand money, and they don't understand that a mass-produced item isn't "collectible" when it comes off an assembly line.

The middle-class is harder to parse.   I think in the past, many middle-class people had lower educational backgrounds, and thus were more susceptible to this sort of nonsense.  Back when I was a kid, you could be comfortably middle-class without a college degree, by getting a job on an assembly line or working as a mid-level clerk or whatever.  These were people who had money, by dint of high wages and generous pension benefits, but really didn't understand how it worked.   These are the Smithsonian subscribers, and they are a dying breed.

Rent About Schmidt and you'll see what I mean.  Schmidt is an assistant-Vice President and Actuary, which sounds impressive, but it is basically a clerical job.   He has some money, which his wife spends on collectibles.  His dream retirement car is a gold Cadillac with a Burgundy vinyl roof.  They are mere consumers - cattle (the theme of the movie) - just buying stuff, consuming things, and wondering what to consume next.   Their lives are without meaning.   Perhaps collectibles are a distraction.

Now, don't get me wrong, there are real collectors out there who collect real things.  A man who has a collection of antique rifles, that he obtained through years of careful research, trading, and restoration, is a true "collector".   He didn't buy them from the Franklin Mint.

Or take the car collector, who buys and restores old cars.   He spends years on this hobby and thousands of hours of his time.   He didn't just go down to the car dealer and buy cars.   But that hasn't stop car dealers from trying to sell even brand-new cars as "collectible" when in fact, they aren't.

And of course, there are Hoarders.  These annoying folks just take in junk and convince themselves that anything rare or old has inherent value, when in fact, it usually does not.   A unique rock is not valuable unless it is made of gold or diamonds.   Uniqueness in and of itself it not collectable.  And age alone does not make something valuable, absent uniqueness.   Old Volkswagen Beetles could be bought pretty cheaply (and still can) simply because so many of them were made, and they are not all that rare, even today.

Plebes love collectibles or relics.   You can spot a poor person a mile away by how he covets older things.   He will tell you that his rusted-out Plymouth is a "rare collectible" when in fact, it is barely more than a parts car.   And as I noted before, even collector cars are a horrifically bad investment - as even "valuable" ones represent only modest rates of return, over time.   Most are worth half the cost of restoration and are a labor of love or a hobby, not an investment.

But the poor will have none of that.  Clem's old Chevelle is worth a mint, because he "restored it" and keeps it in his garage all the time.   It must be worth a million bucks!  After all, we saw that one old "muscle car" that was up for auction and asking that much money, right?   But it really isn't the case.   Collectables and relics are a trap for the poor.

If you do collect antiques or restore old cars, you appreciate the efforts of the poor in keeping this stuff.   These are the people who create the "barn finds" that you discover years later, when they are dead, and you buy them for a pittance and make money from them.  But the original hoarder does not.

Walk away from collectibles.   Unless you are serious about developing something as a hobby, it is likely to be a dead-end.   And as a hobby, it is going to cost you money not make money for you.  The best most can hope for is that maybe someday, when the collection is liquidated, you might make your money back, with a little interest.   But that's about it.

For the rest of us?   Forgetaboutit!   You are not going to be one of the people who wins "relic lottery" by hanging on to some piece of junk, which later in life will be worth millions.   It just doesn't happen that often.

But then again, this illustrates how the poor don't understand the laws of probability, either!