Why the Efficient-Market Hypothesis is Bullshit 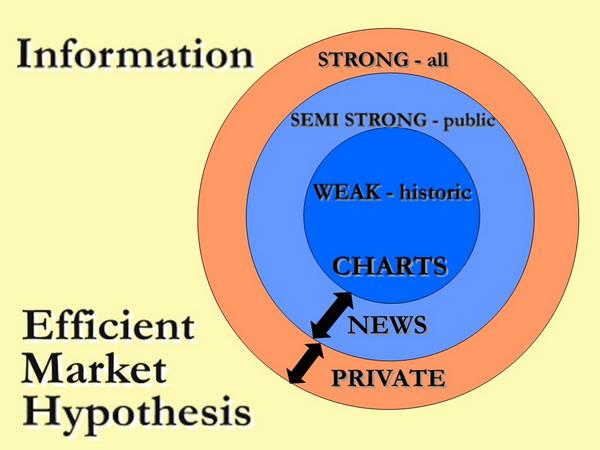 This sort of nonsense, some folks believe, is responsible for the economic meltdown of 2009.

In a recent posting, I mentioned the tulip bubble in Holland in the 1600's.   Some folks point to this as the first recorded speculative bubble, where people let emotions and wishful thinking get the best of them, and drove the price of tulips into the stratosphere - only to see them crash down again.

No, really.   They think this, even after dozens of market crashes and speculative bubbles have burst, even in their lifetimes.

Like I said, economic memory of most humans is about 18 months.   So $5-a-gallon gas in 2008 never happened.   The stock market didn't tank in 2009.   And the bottom never fell out of the housing market in South Florida or Nevada.   Those were just illusions.   Pay no attention to the man behind the curtain.

You know, people who say shit like that piss me off.  It is like these winkie college professors who try to confuse young Freshmen into believing that reality is relative, depending on the view or perception of the individual.   What you perceive as green, I may think of as blue.  That sort of shit.   But if you jump off the roof of the philosophy building, you will perceive the sidewalk below as solid concrete, like the rest of us.   And I suggest you go first, professor.

These bubble-deniers are part of a school of thought known as the "Efficient-Market Hypothesis"  which argues that financial markets are "informationally efficient".  In consequence of this, one cannot consistently achieve returns in excess of average market returns on a risk-adjusted basis, given the information available at the time the investment is made.

Of course, you and I know from hard experience that markets are irrational and inefficient, simply because people are irrational and inefficient.   People have delusions.  People can be stampeded like cattle.   People believe what they want to believe - lies that sound good to them, because they get a freebie out of the deal, or at least think they will.

Mass-hysteria and mass-delusion is common, not the exception.

And this permeates every financial transaction we make.

Status is the driver of most of this nonsense.   Much of what we buy in life is not essential to our well-being, but rather to our emotional well-being.   And we all deny this, of course.   If you have a premium branded car, you tend to think of yourself as "better" than a plebe in a beat-up old Pontiac.   If you have a designer shirt, you think of yourself as more sophisticated than the slackard wearing clothes from Sears.

And please, don't try to deny this or say you are the exception to the rule (people who decry status-seeking behavior ironically use this as a means of achieving status.  "I'm better than them," they argue, "because I don't seek status."  They are oblivious to the fact that the first part of their argument declares status in and of itself).

Greed is another factor.   Back in the 2000's, as I have explained time and time again, I knew an awful lot of people who thought they were going to get rich by buying Real Estate.   And I got rich selling it to them.   They all had that same glazed look on their faces - that "true believer" look that scares the crap out of me.

Why does this scare me?   Because people are dangerous when they are under a mass-delusion.   When you can convince a whole host of people to act against their own self-interests, and to persecute some other group, no good comes of it.   Whether it was Germany in 1936, or the Taliban today.   People become raging "true believers" and burn down a synagogue or strap on a suicide vest.

(And to me, it is just a matter of time before the world is due for another one of these deals.  Maybe it is happening now, I don't know.)

In fact, these "Efficient-Market Hypothesis" assholes are a case in point - economic "true believers" who think that by saying something is so, it will be so.  Bubbles don't exist, they argue, but are mere market evaluations of value.   However, the concrete in the sidewalk has a different opinion, as it comes up to meet you, when you decide you can fly from the roof of the philosophy building.  Reality is not a matter of perception, but has its own agenda.

And historically - even in recent history - economists and accountants have come up with new theories that allow us to have our cake and eat it too.   And usually these theories blow up in our faces and result in a lot of people - usually the "little" people - losing a lot of money.   Remember "mark to market" and the Enron scandal?  New economic and accounting theories that blew up in our faces.

What intrigues me is that something as apparently simple as a commercial market is, in reality, a highly complex organism, and one that some of the best minds on the planet have trouble modeling and predicting.   We live in an era of high technology, but it seems we cannot prevent ourselves from over-bidding on houses or gold.

And every month, it seems, an economist comes up with a "new model" that stands the old ones on their ear.   They sell books and go on talk shows and generate "buzz" by giving unconventional advice, which is the surest way to make a buck in America.   Getting people to say, "Gee, I never thought of it that way!" is one way to hook the plebes on your new theory.

And the idea that market prices contain rational data is appealing.   In a way, it is in the manner of a Wiki or a group consensus.  What the market is willing to pay for some commodity is a conglomeration of the valuation of hundreds, thousands, or millions of people (at least in theory) and thus, Adam Smith's magic hand finds the right values for things.

But again, this assumes a rational market, and we are highly irrational people.

For example, how many people do you know who complain loud and long about the price of gas?   Now, how many of those same people also drive a gas-guzzling SUV or a giant pickup truck with a 6-liter engine, giant buzzing tires, and four wheel drive?   Usually, they are the same folks.

And no, very few of these people "need a big truck or SUV to go to work in" as their employer provides such vehicles for work.   The real contractors who do use work trucks don't buy these fancy gas-guzzlers with giant tires (unless they are morons) - they buy more plebian work trucks.  The morons buy gas-guzzlers to commute to work in because all their friends have them and commuting to work in a Geo Metro would be seen as poor or sissy.

And this is the supposedly rational choice they are making in the marketplace - spending $40,000 or more on a truck and putting monster wheels on it - and getting 10 miles per gallon - when they cannot afford to fund their 401(k).

Now, some clever economist might argue "Well, that is the market value they place on social standing" which I guess might be true - but it is a very expensive piece of status-seeking.   These same economists also argue that gambling is rational behavior as the "entertainment value" is what the gambler is paying for, when he loses thousands or tens of thousands of dollars at the "gaming tables."

But again, this is bootstapping rationality into irrational behavior.   And in many cases, we are not even talking about voluntary behavior, but obsessive-compulsive disorders and the like, which cause people do to things against their own economic self-interest.

The compulsive gambler is not making a rational market choice, but instead succumbing to an irresistible impulse.  As I noted in another posting, this compulsion to gamble can be induced by drugs - it is a matter of brain chemicals, not merely "poor choices".   The alcoholic and drug addict are doing the same - they are not participating in a "free market" when their behavior is compulsive.

And perhaps the Bozo with the giant pickup truck is the same way.  To him, living without a giant truck (and being mocked by his peers at the finger-cutting factory) is unthinkable.  He has to maintain an image at all costs.

And perhaps the gold bugs and the tech-stock buyers are the same way (and in effect, gamblers as well).   They buy over-hyped IPOs not because of a rational choice, but because their brain chemistry compels them to.

And then there are those of us who just choose poorly.   We buy the stock in company B instead of company A.   Company B goes out of business, Company A becomes a conglomerate.  People buy Edsels.   The market itself is just not rational or consistent.   Sometimes things just don't pan out for reasons outside of our control.   The market cannot "predict" which company's warehouse will burn to the ground next week, or whose prototype airplane will crash.  It can only react to such news after the fact.

Taking all of this into consideration, some things are clear (at least to me).  First, the basic tenants of this Efficient-Market Hypothesis are bullshit.  Second, it is possible to get ahead in the marketplace simply by not doing irrational things (or at least doing as few as possible, or fewer than the great unwashed masses).   Third, it is possible to induce others to behave irrationally and make a real ton of money.

With regard to this last effect, I mentioned previously the teenager in New Jersey who did the penny-stock pump-and-dump.   Chances are, you've received one or more of his e-mails, hyping some obscure penny stock, which he claims is "going to go ballistic" or some such nonsense.  Using these mass e-mails, he creates a mini-hysteria (bubble) over this obscure stock, which of course, he took an option on earlier in the day.  The price doubles or triples, he cashes out, and then the stock tumbles and the plebes lose money.

Funny, but "efficient-market hypothesis" doesn't seem to cover that scenario.   And that same scenario is played out on a larger scale by the people who hyped Enron stock, or Gold, or Facebook, or whatever.   There are active players in the marketplace who are paid highly to spread disinformation.  The marketplace is a battlefield, and the first order of business in any battle is to confuse the enemy.

I think simplified economic theories or models have their uses, but as a religion, they are a false God, as they cannot anticipate or predict all the factors in the marketplace, most of which are driven by irrational humans who are being baited or goaded into acting, half the time (think of our tax code, for example, and how many people chase after deductions!).

And that last item is, I think, what these Efficient-Market Hypnotists are trying to pull on us.
Newer Post Older Post Home