Running Away From Home Fad 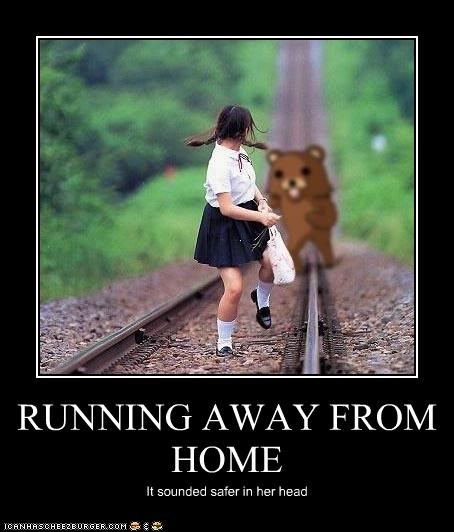 During the 1990's, it became trendy for young people, particularly girls, to runaway from home.   Why and how did that occur?  (watch out for Pedobear!)


Finding statistics on runaways is not easy to do.  Many websites report static statistics ("one in seven children run away from home every year!") which appear to be from our friends at The Bureau of Specious Statistics.

Now, don't get me wrong, the incidence of runaway/throwaway youth is nothing to laugh about.   Every year, many kids run away from abusive homes, or are thrown away (thrown out of the house, or made to feel unwelcome).   Often these kids come from hellish environments that are so bad that living on the street or in a homeless shelter seems like a better alternative.

But back in the 1990's, there was a trend for a while for fairly well-off middle-class kids to run away from home.   And I knew a young woman who did just that, at the tender age of 14.   She did it, not because she was abused at home or was neglected by her parents, but instead out of boredom - looking for kicks and excitement, away from the imposing hand of parental authority.  "All the kids at her school are doing it," her Mother said, "It's a new fad."

And a funny thing, but quite a few of her classmates did it as well - it became something of an epidemic at the time.   It was sort of a rite of passage for them, to runaway and play at being a street kid, maybe hang out, do drugs, have sex, and after a week or so, return to school with some cool and scary stories to impress the other kids with.

But of course, running away from home is nothing to play at, but deadly serious business.   Under-aged girls don't live long on the streets.  They can be trafficked rather easily, and fall under the influence of an older man who then leads them into a life of drugs and prostitution.    Ask any street prostitute how they got there, and chances are, it started with running away from home at an early age - and the resultant dependency on "survival sex" to get by.

And no one has any sympathy for prostitutes.  Heck, we even joke about dead hookers (kids call riding in the trunk of a car, "riding dead hooker").   There are very few older prostitutes.   The lifespan is very short.

And of course, there are always the sexual predators out there who will kidnap young girls.   They just found yet another one, today, nearly 20 years after she disappeared from home.   She is lucky to be alive and not murdered and dumped in the woods somewhere.

So what caused this outbreak of runaways back in the 1990's?   One explanation is mass hysteria.   Over the years, there have been a number of outbreaks of mass hysteria, particularly among adolescent girls.  A recent one occurred in 2012  Others have occurred in the past.

These incidents of mass hysteria seem rare and bizarre to us, only because the behaviors involved (obsessive dancing, faked illnesses) seem somewhat unusual.   But they illustrate dramatically how people can behave like sheep and follow a herd mentality, often into doing bizarre things that sometimes are against their own self-interest.

Hysteria that has more benign symptoms is not diagnosed as hysteria, as it appears to be harmless.   Fads blossom and fade all the time, and no one takes notice.   When I was in grade school, all the girls started bringing "clackers" to school, and overnight they became an obsessive fad.   And over the years, similar obsessive fads have taken hold of people - whether it was beanie babies or virtual pets.

But these are not viewed as damaging to the psyche, but rather just commercial fads or fancies, relatively harmless (that is, until someone shoots you in the head for your Air Jordan sneakers).  They are, however, a way to separate people from their money in an irrational manner.   Once the herd starts to turn and head off the cliff, wily marketers can make lots and lots of money.

The current form of obsessive behavior, of course, is the smart phone.   People pay enormous sums for these and can't stop touching them, all day long - just as the girl in 4th grade, had to play with her clackers in math class, and got sent to the Principal's office.

But getting back to the runaway frenzy, what caused it?   I suspect that one girl at the school probably ran away from home to get away from an abusive home life.   When she returned, she regaled the other girls with her adventures, making them seem glamorous and exciting.   At that age, sex and drugs are powerful stimulants, and being the center of attention (from classmates, as well as parents) is also quite an inducement.

And in many of these mass hysteria cases, getting attention appears to be one of the factors that induce people to engage in such activities.   When people see others getting attention for destructive behaviors, they too, feel they need to act in a similar manner, so as to not be "left out" and also to get their short time in the spotlight.

So the other girls see how negative attention (from parents) and positive attention (from peers) is showered on the runaway girl, and they start thinking, "Maybe I need to run away as well!  After all, Mom keeps bugging me to clean my room!"    And the process starts and spreads like an infection.

But all epidemics die down, over time.   Eventually the virus mutates, or it kills off enough of the host to stop spreading.   Or people see the negative effects of the virus and take action to stop its spread.   The plague, influenza, HIV, whatever  - each epidemic has a natural curve it follows - a rapid rise, followed by a rapid tapering off.

Of course kids still run away from home these days.   But I don't think it is the trendy thing to do anymore these days (I have tried to find some statistics on this, but the sites all use old, static data - one cites rates from 1994!).   The kids have moved onto to new obsessions, I think.

But this got me to thinking about how much of our behavior is a matter of personal choices and how much is just herd mentality, driven by normative cues in our environments.   On the Mr. Money Mustache site, for example, people regale each other with tales of their thriftiness, and thus reinforce this behavior among one another.   On a car enthusiast site, however, the norms are all about spending money "modding" your car, and not surprisingly, the members try to outspend each other based on those cues.

"He that walketh with wise men shall be wise: but a companion of fools shall be destroyed." Proverbs 13:20

You are the company you keep, it would seem.  You hang out with drug addicts, you will become one.  You hang out with honor students, well, you may trend in that direction.   And not because of some moral failing or whatever, but merely because the normative cues from your peers will be different.

A reader recently inquired, "All my friends are coke heads, what should I do?"  And my advice was, "find new friends".  This seems pretty simple and basic - if you hang out with coke heads, you will become one, or at the very least, your life will be unpleasant, as they will steal from you, eventually, and be unreliable and unpredictable.

But many folks think that is horrific advice - how can you just walk away from friendship or even your family?   And the answer is, if it is an abusive relationship, just walk away.   You can't "fix" people, and if you hang out with folks who are bad for your psyche, you will just make yourself miserable.

Sadly, our society often forces people into contact with each other, and High School is the prime example of this.   You are tossed into the meat grinder and forced to interact intimately, with a lot of people who often have very, very wrong ideas.  Teenagers are very suggestible and easy to market to, not because they are young and impressionable (that helps, of course) but mostly (I think) because they spend so much time with one another and place great emphasis on being accepted and being part of some social group.

As we get older, well, we spend less time in forced social groups like high school or college.   Work becomes the only forced social group, and even there, people often pick up poor normative cues and thus act against their own self-interest.

It is only when we get older that we start to care less about what others think, and think more for ourselves.  Sadly, of course, some never reach this point.   Many remain with the herd until they breathe their last breath.   Visit a retirement community sometime, and you'll see what I mean.
Newer Post Older Post Home