A Legit Way Out of Student Loan Debt? 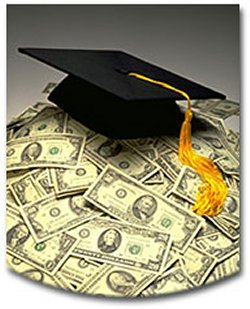 Is there an easy way to get out of Student Loan Debt?  Not really.  There are some loopholes, but not for most folks!

The Debt-Guy is at it again, with a new "free guide" to getting out of student loan debt.   While it has some useful information, there are some problems with it.  The guide is remarkably vague and is peppered with hyperlinks to "Click Here to Get Out of Debt!" or some such nonsense.  Maybe these are click-bait links, or what, I don't know.   It is a confusing site to read these days, as each page just seems to be a link to yet another page (all of which are sagging under the load of advertisements).

However, one article piqued my interest, as it made the case that there are some interesting loopholes that can allow some people to duck out on Student Loan debt.   But the circumstances are fairly limited.

"For Profit" schools rack up the highest amounts of student loan debt - and hand out the most worthless degrees.  But that could be a ticket for some folks to duck out of that debt.   You do have to declare bankruptcy, of course.

If the school is not an "eligible education institution" then the private student loan debt might not be shielded from bankruptcy and be wiped out entirely:

Regardless, any consumer who has vocational student loans with a private lender should have their attorney go for a full discharge if the school they went to was not an “eligible education institution” under 26 USC 221(d)(1) and (2) means that the debts are not “qualified education loan(s)” under 11 USC 523(a)(8)(B), and therefore are dischargeable.”

Of course, this only applies to these odious "for profit" schools, not to a major university, which is an eligible education institution".  And even some of those schools might qualify as "eligible" and thus the debts would not be dischargable.

The number of loans being discharged is still tiny - dozens at best, from what I can see.   Although Get-Out-Of-Debt guy seems to think many more are reduced in pre-bankruptcy negotiations.

Of course, the best way is to not take on these debts in the first place.  One of the subjects profiled was mentioned as having acquired over $180,000 in student loan debts going to art school.    I am not sure how one can spend more on art school than being a Doctor, but there you have it.

Tellingly, when I Googled the name of one of the "art schools" they went to, the website said, "Click here for a location near you!"

In other words, it was a no-name "for profit" art school.

You can make money going to art school.   Andy Warhol got his start at a commercial art school.   But the cost of tuition was pretty low - most trade schools have fairly low tuition.  My great Aunt was an illustrator for A.C. Nielsen, after she got a degree as a commercial illustrator.  She never made a lot of money at it, of course, but then again, she never expected to.   Expecting huge riches in fields that pay poorly is not a very logical way to think.   Borrowing nearly 200 grand to go to art school is just foolish.

But I am not sorry for the banks, of course.   They made these private loans, hoping to ruin the student financially - and it backfired on them.   Maybe now, banks will be a little more shy about loaning money to students to go to worthless "for profit" colleges, which in turn would shut down these exploitative operations.

The Debt-Guy argues that more people should try to have Student Loans relieved in bankruptcy - and that more folks could do so, but are afraid to try.  I think the "Debt Guy" may be overstating the case - or understating it, by failing to tell the whole story.

In his summary of one of the cases, he glosses over the fact that the debtor is not the student in question, but a parent who foolishly co-signed for nearly $200,000 in student loan debt.   And the reason this parent was relieved of the debt, was due to illness and divorce.   No word on whether the obligation was discharged from the student (son) or the divorced Father (who also co-signed, apparently).   In other words, at first blush, it appears huge debts were "discharged" when in fact, it appears that one parent merely had their obligations waived or reduced, due to illness and inability to pay.

The test for discharge of legitimate student loans is pretty harsh:

(1) Based upon current income and expenses, the debtor cannot maintain a minimal standard of living for the debtor and dependents if forced to repay the loan;

(2) Additional circumstances exist indicating that this state of affairs is likely to persist for a significant portion of the repayment period; and

In this case, with a 55-year-old Mother diagnosed with Lupus, whose lifetime income is limited, it is not hard to show that she would never be able to make $2700 a month in payments.   Whether the son, who owns a party-rental business can, is not an issue in the case and thus was not addressed.

Note that also the standard is "minimal standard of living" - about at the poverty line.  I her case, her monthly income was $1700 a month and the loan payments $2700 a month.   While a lot of the debt was reduced with regard to her obligation, at least, some of the remaining debt was not.

So, if you think, "Gee, these $500 a month student loans are a pain in the ass!  I want to buy a new car!"  you might want to think again.   Unless you can show some extreme hardship, I don't think bankruptcy is going to wipe out your student loan debts.

The Debt-Guy points out that many people are falling victim to this mentality and as a result are being fleeced by con artists.  These companies promise what is "too good to be true!" namely that if you send them a few thousand dollars (usually 1% of the loan amount) they will "get you into a program" to get you out of debt.

Some of these companies do nothing at all - they just keep your money, thank you.     Others just put you in touch with long-term  (30-year) loan refinancing.   And I think the Debt-Guy is saying "just cut to the chase" by refinancing your student loans directly.   You can stretch out the payment terms, perhaps, and maybe reduce the interest rate, and end up with a monthly rate which is affordable.  But wiping out the debts entirely?   Not in the cards.

There Ain't No Such Thing As A Free Lunch!   But you can make a mint selling free lunches to people who believe that.    And these crooked "Student Loan Relief" companies thrive on that.