Is America Really a Capitalist Country? Not By a Long Shot! 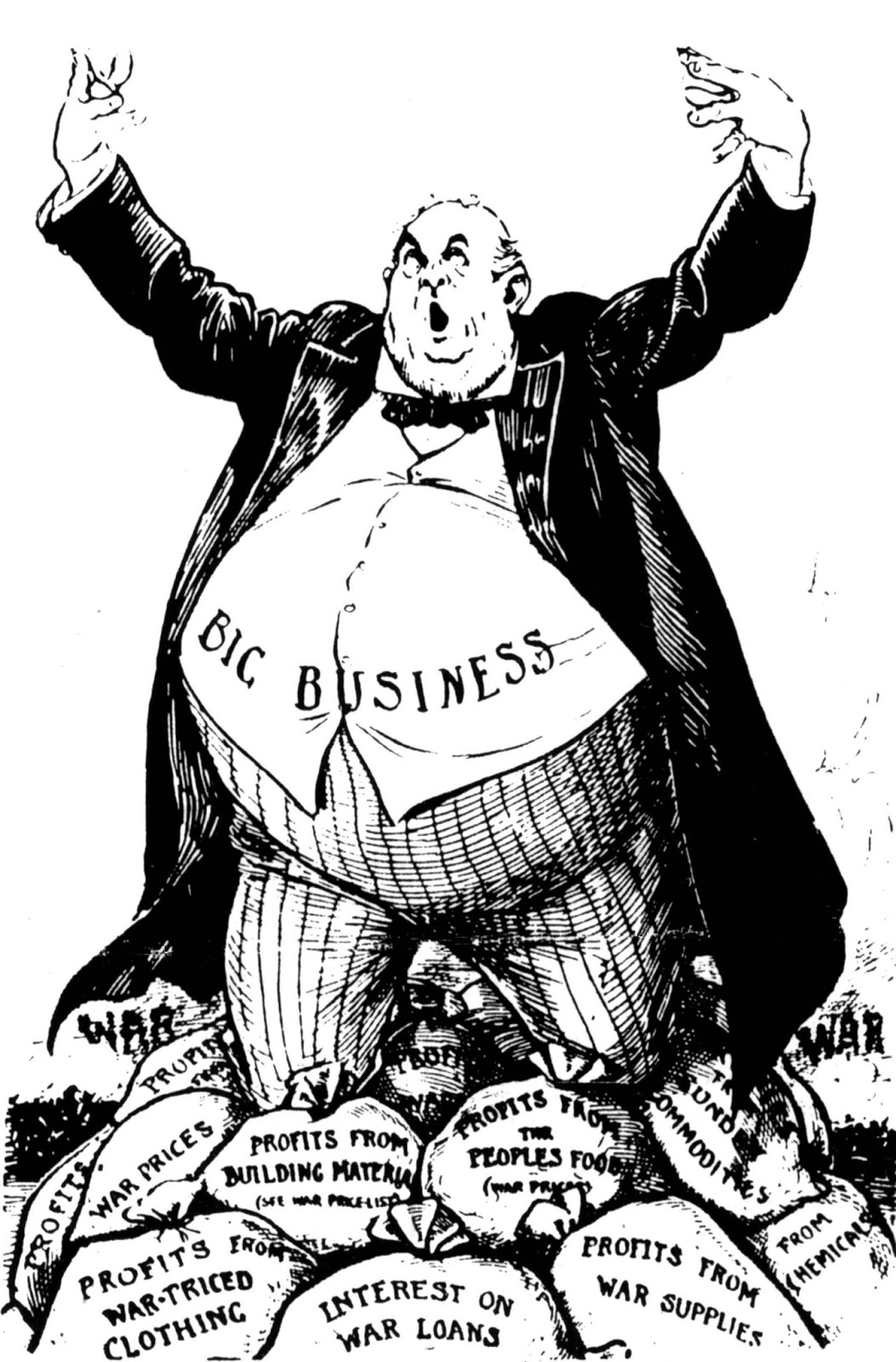 Are we really living in a Capitalistic Society?  Not really.


Many folks decry the United States as an example of a free-market economy run amok.   We live in a dog-eat-dog world, here, where the "invisible hand of the marketplace" reins supreme - and those who can't hack it, well, fall by the wayside.  The rich get richer and the poor get poorer.  I've got mine, Jack, you get yours!

But if you examine the history of this country, you'll find that it is anything but that.  Over the years, we have had many laws enacted - by both Democrats and Republicans - which limit competition, establish monopolies, break up monopolies, and set retail, wholesale, and labor prices.

And these things have happened not that long ago - and indeed, some continue on today.

And what is really odd, is that many people in the far right say we should go back to "the good old days" - but the "good old days" were chock full of regulations and government agencies, which often limited competition.   And ironically, it was under Democratic administrations that many of these agencies and their regulations were abolished.

Here is a short list of some government actions, instituted by both Democrats and Republicans, that some might argue border on Communism - the "big hand" of "big government" telling Americans what they can or cannot do, limiting or controlling competition, or handing out huge freebies to selected companies.   None of these actions could be considered evidence of a "free-market economy" in the least sense.

The Miller-Tydings Act.  Enacted in 1937 and not repealed until 1975, the Miller-Tydings act basically set minimum prices that retailers could charge for products.  During the depression, the concern was that large chain stores would slash prices and put little Mom-and-Pop operations out of business (which they did, once this act was repealed).  As a result, stuff was expensive back when I was a kid.   And you couldn't just "shop around" for better prices, as everyone basically charged the same price for goods.   What sort of Commie country controls prices like this?  The Good Old USA, of course!

Regulation of the Trucking Industry (Interstate Commerce Commission).  "ICC is checking all down the line, I'm a little overweight, and my log book's way behind!"  - so said David Dudley back in the 1960's.  Back then, the ICC regulated the trucking industry, including who could travel what routes, what could be charged, and a whole host of other regulations.  The ICC has been abolished since then, and the trucking industry has been de-regulated.  Today, if you want to haul a load from New York to California, no one is stopping you.  Hard to believe that in the "Good old USA" you had to ask permission to drive certain truck routes.  Ironically, the ICC was initially deregulated under a Democrat, Jimmy Carter, in 1980, and finally abolished under Bill Clinton in 1995.  Funny thing, people think Ronald Reagan was the one who de-regulated America's industries!

Regulation of the Airlines (Civil Aeronautics Board).  The CAB was to airlines what the ICC was to railroads and trucking.  If you wanted to run an airline, you went hat-in-hand to the CAB and asked permission to do so, and the CAB told you what you could charge for airfare and what cities you could fly to and from - and what cities you would be required to fly to and from.   The CAB was created during the depression, and once again, legislated out of existence under (wait for it) Jimmy Carter in 1978, sputtering to an end during the Reagan years in 1984.
Richard Nixon's Wage and Price Controls:  Many people conveniently choose to forget this one.  During the era of Stagflation (which I will discuss in another post) - driven by escalating oil prices and labor costs - a Republican President did the ultimate Commie thing - he told everyone what they could charge for their labor and their products.   No really.  In America.  Under a Republican President!  The limits were temporary in nature - and were ineffective as well.   But when confronted with an economic problem, even Republicans will resort to the heavy-hand of "big government telling us what to do!"

Grazing Rights:  This was in the news recently as some yahoo rancher decided he didn't want to pay his accumulated grazing rights fees.   Even Glen Beck though he was whacked!  Historically, the Federal Government has allowed ranchers to let their cows graze on public lands for very low fees - so low that they are, in effect, a government giveaway.   Apparently some folks don't want to even pay that.

Oil&Gas Drilling Rights:  This is another area of government giveaway, and interestingly enough, many oil and gas companies buy these leases and then do nothing.    They are not so much interested in exploring for gas and oil as they are in making sure no one else does.  In other words, limit competition, by creating an artificial shortage, much as the DeBeers people do with diamonds.

Crop Subsidies and Farm Aid:   These programs originated in the Great Depression, but over the years, they have been morphed by big agri-business to achieve different ends.   Sugar price supports destroyed the market for sugar in this country and nearly bankrupted Cuba (which was, perhaps the intent).  It also meant that the corn industry made a fortune by selling cheaper, but perhaps unhealthful, High Fructose Corn Syrup.   The teabaggers deride Obama for "picking winners in the marketplace" but historically, both parties have picked "big corn" as a winner, again and again.  Ethanol mandates, of course, have bootstrapped this by a factor of 10.   Big milk is another area of historic subsidies, to the point where the government was buying up tons and tons of milk and cheese and warehousing it.  Republican or Democrat, if you are from a farm state, you cannot afford to vote against these subsidies.

Those are just a few examples of old-school "socialism" from the "good old days" - much of which is still with us today.  There are dozens, if not hundreds of examples of other forms of "regulation" from the good old days - if you bother to look.   Regulation is nothing new.   Our economy has been managed and directed since this country was founded.

The battle cry of the teabagger is "That's Socialism!" when talking about Obama policies.   But these sort of Socialist or even Communist policies have been around for a long time.   And to the far-right, they no longer even register on the radar.

The teabagger decries Food Stamps as "socialism" but says, "Don't touch my Social Security!" - failing to realize that both are government wealth-transfer programs.

Similarly, they decry Obamacare, as "the government should not be collecting tax money from people and using it to pay for the health care of others!" - but of course, in the same breath, they say, "But don't touch my Medicare!"

In other words, there is a lot of selective memory going on here.   The narrative being sold is this:  America used to be a great place where you could buy big-block muscle cars with no seatbelts and do whatever you wanted to.   Then those namby-pamby Democrats got into the picture and "regulated" everything.   Fortunately, Ronald Reagan put a stop to that!  We need more Republicans in the White House to de-regulate things!

The reality is quite clearly otherwise.  Cars today are better then they were 'back then' - in every measure.   And it was a Democratic President who signed most of the de-regulation legislation that people give Ronald Reagan credit for.

What Republicans have done, in the last 30 years, has been to de-regulate our banking system - twice.   The result the first time was Michael Millikan and the Junk-Bond debacle, and the "Savings and Loan" crises and a housing sector meltdown.  Twenty years later, when another Republican administration loosened the reins on the banking industry, we saw "Credit Default Swaps" and bundled mortgage-backed securities - which were as worthless as Millikan's junk bonds of 1989.   And once again, we saw a crises in the housing sector.

But, you know, you can't tell the teabaggers anything.   To them, the entire housing crises was caused by an obscure program called the "Community Reinvestment Act" which was designed to put an end to redlining in the lending business and allow the poor access to mortgages.  In their narrative, it allowed welfare queens (read:  black people) to buy houses they could not afford, which of course crashed the entire economy.   A bizarre fantasy, to say the least - at least to anyone who worked in the Real Estate business or was an investor at the time (or both).   I can tell you firsthand that in  Ft. Lauderdale Florida, the people buying and flipping mini-mansions and condos were not poor black folks, but middle-class white people who all got a little too greedy - and were using funny-money "liar's loans" to finance it all.

The Community Reinvestment Act had nothing to do with it.   And it was not the bank's fault that liars chose to lie on liar's loans - right?   For some reason, the teabaggers have selective memory on all of this.   They are the victims here, having bought huge houses they could never afford in the first place, and lying to get them - and wondering why they lost it all.   It must be the black people's fault!  After all, they steal everything, right?

And therein lies the problem.   People believe what they want to believe, not what is actually true.   And if someone sells you a "story" that all your problems are the result of someone else's action - preferably a minority group that you hate anyway, it is an easy story to sell.

You are not at fault for your situation in life!  Your stupidity, your lack of interest in education, your laziness, your sloth, your astounding level of chutzpah, have nothing to do with the fact that you squander money, are not qualified for any sort of high-paying job, and the fact you just got laid off.   No, no, it was the black people and the Democrats.  They are the reason you are put-upon!

Only a stupid child would believe such a story.   But sadly, that is increasingly the mentality of adults in America today.