While there were some bargains to be had in the immediate aftermath of the housing meltdown, prices have rebounded quite a bit in some regions, and arguably are no real bargain.

In 1995, I was buying foreclosure properties that were left over from the 1989 housing bubble.   That's right - six years after the bubble burst.  What too so long?   Well, it took years to foreclose on properties, and that was only after people struggled for years to "hang on" to properties they should have walked away from early on.

Recently, a hedge fund manager made the case that housing may be headed for a downturn - or at least remain flat for the foreseeable future.   Mr. Gundlach makes some good points.   You have to "do the math" on a house as an investment or as a personal residence.  And even with rising rents, many homes today are cheaper to rent than to buy.

Remember that in a "normal" housing market (which we have not seen for decades) a house appreciates by about 2% or so a year.   Houses simply cannot go up 10-20% a year indefinitely, as they quickly become overpriced for the market.   As I noted in another posting, there really is no such thin as "unafforable housing" - a house will find an owner or a renter in due course - once its price reaches equilibrium in the market.

Compounding this is the law of supply and demand.   The number of young people entering the housing market (20-30 year olds) for the first time, is dwindling, as our "age pyramid" looks more and more like a minaret.   Many of these young people are struggling with unemployment rates as high as 25% - and student loans sometimes in the six figures.   They are not the prime buyers we had in the late 1990's and early 2000's when even some slacker job would pay enough to own a home.

Another factor Gundlach mentions is the number of dying baby boomers and the number of houses that will soon hit the market.   Tell me about it.   We are trying to sell a relative's house even as we speak.   It will sell, but not at the prices that we would have found during the heyday.   People are more cautious in spending money on houses, it seems (although one neighbor down the street from us recently bought a home for a cool half-million dollars, and has spend at least $150,000 remodeling it - for the last two months!  Houses on this street typically sell for under $400,000.  Those who really have money simply don't care).

As I noted in the age pyramid article, the fattest part of the age pyramid (in more ways than one) is for folks my age - born in 1960, the height (and end) of the baby boom.   When we start kicking off, in about 15-20 years, there will be a lot of houses, cars, and junk on the market.   But even before then, many of us will sell out and "downsize" to a smaller home - likely so we can afford food by then, as hyper-inflation and high food costs look to be around the corner.  The boomers cashing in their 401(k)s all at the same time will depress the stock market as well.

So what does this mean?  Should you dump your house while you still can?  Is the country going to hell in a handbasket?

Well, not exactly.   Housing will remain fairly flat, I believe, for the next decade.   Nice, steady increases in prices are much more preferable to sudden rises and drops, like we had in the 1980's through the 2000's.   But this does mean than some "investors" are not going to rake in big bucks, unless they bought very cheaply in 2009 and can sell out now.

For the rest of us, it is the same old thing - "Do the Math".   Can a property support itself through reasonable market rents?   If not, then it is overpriced, period.    Buying any investment property on the basis that a negative cash-flow is "affordable" because the potential Capital Gains are so high, is a recipe for disaster.   But that is exactly what many people did, from 2002-2009.

Some might argue that the tax deduction might make it affordable.   But long-term, this property isn't going to appreciate much, and for the first five years, at least, you are not going to pay down much in principle to offset the closing costs.  Unless you plan on sitting there for a decade or more, it might not be a good deal.

Maybe a good time to sell, maybe not.  What makes this property unique is that it is slated to be demolished and the site (22 acres, next to a Metro station) made into a mixed-use highrise development with $300,000 condos (who on Earth can afford those?).  Once again, the bulldozer seems to follow us around.

Should I keep it or sell it?   $150,000 buys a lot of stocks and bonds.   And if rented at a profit of $630 a month, this represents a return on the investment value of about 5% - not all that great.   The only reason to keep it is to (a) diversify my portfolio and (b) hope for a bigger payout in a year or two when it is bulldozed.

It was a great investment - in 1995.  Today?  I would think long and hard before ponying up $150,000 for the same place, particularly since the second half of a $6000 assessment is coming due in November.  Remember what I said about buying Condos!

If we sold that property, I doubt I would use the proceeds to buy another, as most of the properties in that area - or even where I live - are priced fairly high, to the point where they are break-even propositions at best.

I don't think we'll see a "Crash" in housing prices, but we may see a slight correction of 10-20% over the next few years.   Fewer buyers means fewer sales.   And all it takes is for one home to remain unsold, for prices to fluctuate greatly.

As I noted several years ago:

What drove prices so far down? A staggering drop in demand. How is than even possible?

To begin with, understanding how prices are affected by demand is important. Even a small drop in demand or a small increase can cause prices to fluctuate wildly.

For example, suppose in a small town there are 100 homes for sale and 99 buyers. Well, clearly, someones home is not going to sell. So that homeowner will drop his price. As a result, perhaps one of the buyers will buy his house instead. This in turn will cause another homeowner to drop his price. Perhaps if prices drop enough, another buyer will appear to snatch up a bargain.

Conversely, if there are 99 homes for sale and 100 buyers, one buyer is not going to get a house. He might bid up the prices in an attempt to buy a home, which in turn can cause a bidding war.

If the median home price in our mythical town is $100,000, it is not hard to see how a small bidding war, between even a few buyers, can increase home prices by as much as 5-10%, as the incremental monthly cost of ownership is not that great. Similarly, it is not hard to see how even a small discrepancy between the number of sellers and buyers can drop prices dramatically - again by as much as 5-10% without effort. And all this because of a ONE PERCENT difference between buyers and sellers!

So you see, our "housing bubble" was not due to huge demand and the collapse was not due to a huge drop in demand. People still want houses, just not as much as before. If demand drops 5-10%, housing prices can drop 20-30% easily.

The same is true today.    Gundlach is right - there are still a lot of foreclosures in the wings, and a dearth of people willing to buy homes.   I was buying foreclosures as late as 1998 (seven years after the meltdown of 1989).  If history is any indication, there will be bargains out there in the next few years.

And if my memory serves me right, we did have a a second dip, right about then, as well. 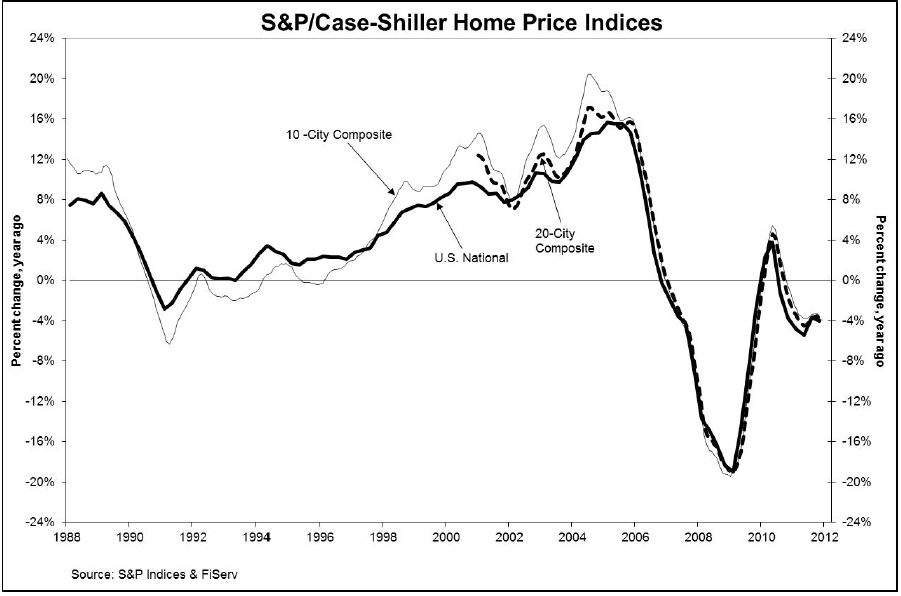 A little chart for you naysayers who claim that the 1989 bubble "never happened".  Click to enlarge.   Note how prices remained largely flat for several years after the 1989 crash.