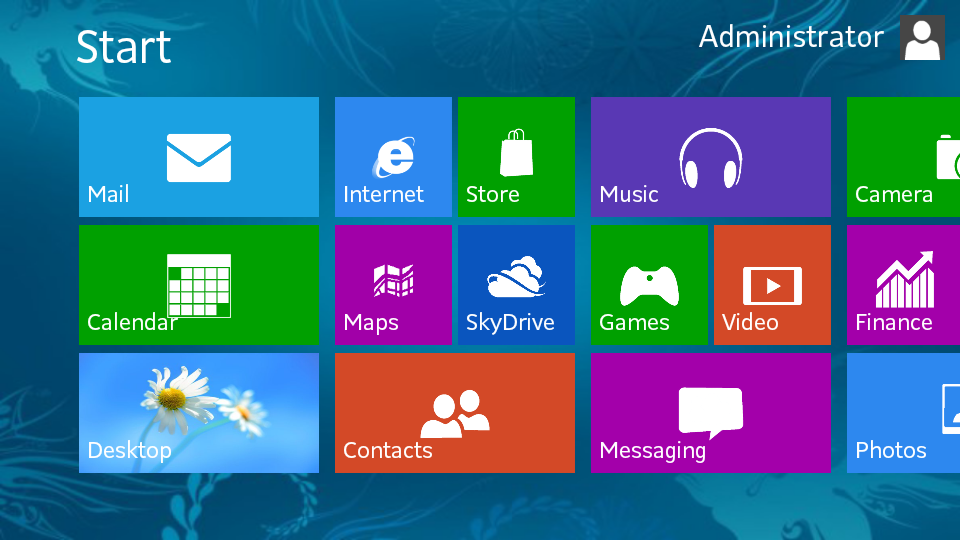 Windows 8 is nothing more than Windows 7 with a lot of features removed, and a new overlay put into place to get you to lock yourself in Microsoft's universe.


The computer, phone, and Internet business are combining into one mega-information business, and quickly settling out into three major players:  Google, Microsoft, and Apple.

An each wants you to join their universe and stay there and never leave.  Apple was the first to offer this hermetically-sealed environment, where one could seamlessly own an Apple Mac, Macbook, iPod, iPhone, and iPad, and link them all together using Apple services, like iTunes, to live in an Apple-centric world.   You need never leave - it is like an all-expenses paid resort.   Well, more like a cruise ship, where you are trapped inside and you have to pay for every damn little thing.

Google, of course, has its own operating system.  They don't sell hardware (yet), but they do have a majority of the smart phone market, at least in terms of operating system.   They tried to develop their own phone, but realized that competing against their own customers was a bad idea.  Google has their search engine, Google Plus, Gmail, YouTube, Google Drive, and so on.   And increasingly, they want you to live in a Google world, again, hermetically sealed (perhaps not as well as Apple) and never leave.

Microsoft has been late to the game, but with Windows 8 is clearly telegraphing where they want to go.   What is Windows 8?  An annoying version of Windows 7.   Windows 7 Ultimate is probably the best version of Windows to date.  It is stable, runs well, and is similar enough to earlier versions of Windows that the learning curve is very shallow.

Windows 8 adds a cell-phone like overlay where you can select "apps" to run, instead of programs.   And all the default apps are for Microsoft based products or services.  You want e-mail?  Set up a hotmail account.  You want music?  You are directed to the X-Box music store.   The X-Box games store provides games of course.   And they want to sell you their cloud services, Microsoft Instant Messenger messaging, and so on.   And every damn thing you do requires you log into Microsoft with a Microsoft e-mail account such as hotmail.

You can, of course, load the regular Windows desktop.   But it is missing the START button, so finding programs and folders, as well as setting up your computer is an exercise in frustration.  This has been criticized severely, and supposedly the next version of Windows will bring back the START button feature.

It is frustrating, as you find you have to re-learn basic things all over again, with the net result being that you waste a lot of man-hours in retraining, for no apparent purpose other than a crass commercial attempt to get you to spend money at the Microsoft App store, music store, game store, or some other commercial venture.   It wastes your time and sucks your wallet dry - what's not to like?

Windows 8 continues the trend toward "you don't need to know that" - where the basic operation of your computer is shielded from you "for your own protection".   This can be frustrating, if, for example, the computer comes bundled with McAfee anti-virus software (which disables Windows Defender!) and thus makes it nearly impossible to remove.

A friend brought by a mini-notebook with Windows 8 on it.  We got it set up and created the backup pen drive (no DVD-ROMS any more!) and unloaded all the junk "bundled" software from Norton and McAfee that came with it.

I was able to navigate fairly easily having used ANDROID "Ice Cream Sandwich" on a cheap netbook already.   It navigates the same way - with apps that you access by swiping the screen like a cell phone.

One weird thing - to turn it off, you no longer hit "START" and "SHUTDOWN" but press the "OFF" button, just like on the good old computers of yore.

But overall, I don't see the advantage over Windows 7, unless you really don't know how to use a computer and need this app-screen nanny to guide you around.

And the propensity of the system to direct you to Microsoft sites (no doubt to generate revenue) is somewhat disturbing.  As with cell phones, they want you to buy "apps" over and over again, and thus spend a lot of money on a computer, after you have already bought it.

Windows 9 supposedly will go back to more of a computer-based GUI.   I think that is a good thing.   However, the touch screen does seem to make things a little easier, and sometimes can be easier to use than a mouse or touch pad.   Perhaps that is indeed here to stay.  We'll see.  One problem with a touch-screen is that you touch it and after even an hour of use, it was covered with fingerprints.

But my advice?  Skip Windows 8 entirely.  Stick with 7 if you have it, or wait for 9.
Newer Post Older Post Home