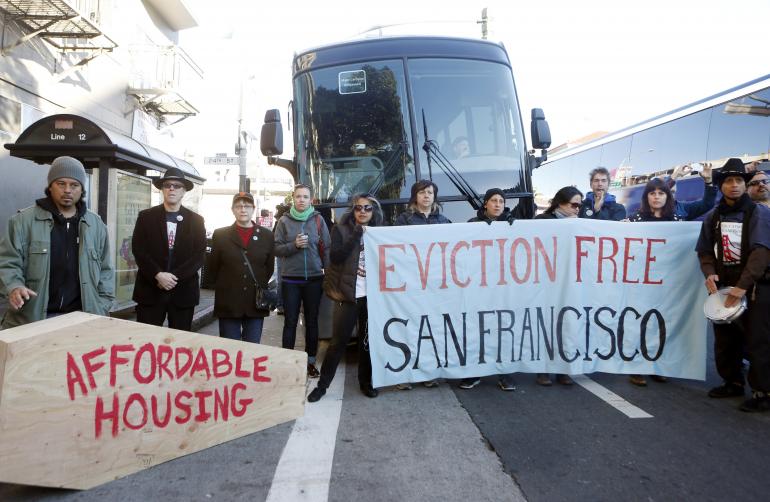 These people are protesting the fact that tech companies are hiring people and paying them good money.    Funny thing, most of the people protesting in this photo appear to be white!


On National People's Radio this morning, more breathless coverage of how awful things are in the Bay Area, with regard to inequality in the tech sector.

In case you've missed the insanity, the story goes like this:

Tech companies are hiring people for tech jobs.   These are people with Engineering or Computer Science degrees, and they are paid a lot of money.

These folks are buying houses and condos (or renting) in the Bay Area, which means demand for housing is up, and according to the law of supply and demand (which cannot be repealed by a legislature) the price of housing is going up (the same thing is happening, ironically, in Detroit these days!).

All of this is outrageous, of course, as the "poor" people living on welfare are being "priced out of the area."   The Humanity!

Oh, but it gets worse.  These evil tech companies who hire people and pay them money (the horror!) decided to institute bus service for their employees, so they don't have to drive to work.  The idea was to be progressive by eliminating all that traffic produced by commuters as well as help clean the air.

People are protesting against this as well, often laying down in front of the buses, as shown above.

What is going on here?   Companies are hiring and providing good-paying sustainable jobs, trying to act in a responsible manner, and yet they are criticized for "gentrifying" neighborhoods (i.e., causing urban blight to be cleaned up) and for trying to alleviate traffic congestion and pollution.

There was a time, in this country, that these were deemed to be social goods.  Today, they are deemed the height of evil.

And you wonder why our country has lost its way.  Employers are bad.  Good jobs are bad.  Having a good job makes you a bad person.  Cleaning up a neighborhood is an awful thing.  Rising property values and prosperity are horrific.   How crazy do you have to be to believe any of this?

This is, in a word, insanity.

Our country has gone off the rails, in some places, particularly California.    The new American hero today is not the Horatio Alger story of rags-to-riches, but the noble poor, who are somehow better than us, by dint of being poor.

Now, I know what some of you are going to say.  "You heartless bastard!   I'll bet you've never been priced out of your home and forced to move, have you?"

We sold our house in New York when the property taxes skyrocketed to $8,000 a year.  Why did they go so high?   Well, in that Welfare Blue-State, they jacked the property taxes to help pay for welfare programs in the county - to help those noble poor get subsidized housing.   We literally had to sell our house and move away, as we could not afford the taxes.  The poor, on the other hand, got free houses, free food, and free money.   And as more and more working people move out, this burden of the poor is forced upon fewer and fewer working people, until it simply becomes unaffordable - if you have a job - to live there.

And our bill was cheap.   Others had to give up homes that had been in their families for generations, due to tax increases - well into the five digits.  A friend in Maine, who lives in a small cabin on property that has been in his family for a century may have to move, as his taxes are expected to triple, after re-assessment, due to the fact he has a lot of waterfront.

Many working "Watermen" (fishermen) have the same problem.   Tax rates go up, and they have to sell out and move to inland, land-locked properties.

But for some reason, no one feels sorry for you when you have a job.   It is only those poor folks on welfare that need our sympathy!

It reminds me of a conversation I had with a fellow in Key West, about a decade ago.   He lived in a million-dollar home on the island, and was decrying the lack of "affordable housing" for the poor.  In his mind, what was needed were more public housing complexes so that the poor could afford to live on a resort island and collect welfare in the sunshine.

I pointed out to him that middle-class people also couldn't "afford" to live there, even if they had jobs.  You had to be very rich - like he was - or destitute.   And the idea that welfare recipients should have their choice of the prime Real Estate was just insanity.   You can collect welfare anywhere  - and no one has a "right" to live in an expensive neighborhood they cannot afford.

That pissed him off really good.  He called me a heartless cruel bastard who didn't care about the plight of the poor.  And the irony of his living in a million-dollar home just didn't register with him.

We are told, in America, how rotten we are to our poor people, and what heartless capitalistic bastards we are because on any given night, there are about 650,000 homeless people (out of a nation of 330 million, or about 0.2% of the population).   We need to treat the poor better!   We need to cater to their every need!  We need to build them free houses!  They have a right to live wherever they want!

Funny thing, though.  If you actually have a job and work for a living - even a fairly menial job - you have fewer rights than the poor.  You have to live in a neighborhood you can "afford" and often that costs you half your take-home pay - or more.

Are we going crazy or what?  Why are the needs of the poor and destitute suddenly the greatest concern of our country?   It is not like you are going to starve to death in the USA.  Far from it.   The greatest health problem for the poor in this country is obesity, not malnutrition.

So people in San Francisco - wealthy people - are falling all over themselves to support getting rid of these buses for the tech companies.  And fighting to preserve run-down housing and ghettos.  And chastising tech companies for hiring people and paying them good salaries.

And their latest gag is this - the tech companies, like Google, are not hiring enough minorities.    They argue that most of the people working in these tech companies are white.  As this report noted:

"That seemed to be the conclusion when the Silicon Valley giant this week issued a gender and ethnic breakdown of its workforce that showed that of its 26,600 U.S. employees, 61 percent are white, 30 percent Asian, 3 percent Hispanic and 2 percent black. Thirty percent of its employees are women."

But 63% of the population of the USA is white (no really, white folks are not a minority by a long shot - although many people report that as true today).    If anything, white folks are under-represented at Google!

The nation's overall population is about 63% white, 17% Hispanic, 13% African American and 5% Asian, according the Census Bureau.  The fact that a company might hire mostly white folks is hardly surprising, as they make up most of the population.   The fact that few blacks are Engineers is hardly surprising, either, given the dearth of qualified graduates in this field.   Tech companies can't manufacture graduates to fill vacancies.

Just kidding.  They aren't.  No one is.   Google, like anyone else, hires the best people it can find.  And not many blacks are graduating with Computer Science degrees.   Certainly not enough to make up 13% of the workforce in that field.  Ditto for Hispanics.

And the real problem is, people on welfare and working minimum-wage jobs don't have Computer Science degrees and thus cannot apply for jobs at Google.  And the kids growing up in the ghetto don't value education, but instead beat the shit out of the one kid who actually tries to succeed in school.

Asians, on the other hand, value education and are more likely to pursue technical careers.  And overall, men are more likely than women to get into Engineering.   What these slacker protesters are saying is that we should somehow manufacture more minority Engineers?   How do you go about doing that?  And whose responsibility is that?

Until these protesters start instilling educational values into their kids, not much is going to change. And by educational values, I don't mean going to Protest University, doing bong hits, and majoring in bullshit degrees.  Yea, Engineering is hard, but if you want a high-paying Google job, you have to do hard things.

Oh, but it's our fault, right?   You evil employed people making money and spending it.   You are ruining the lives of the very poor!

It is hard to even begin to understand this insanity and where and how it got started.  And trying to dissect or analyze it is next to impossible.  No matter what you say, you are accused of being a "heartless bastard" who wants to "stomp on the poor."  And our poor are hardly poor, in this country.

The odd thing about the photo above is that most of the protesters are white, and I think a lot of this nonsense is not coming from minorities themselves, but rather from liberal whites who have nothing better to do. They attack Google and other tech companies, because the cost of living in San Francisco is going up and it is they who are being priced out of their homes, not the minorities living across the bay in Oakland.

The sad thing about all of this is that many companies are being chased out of California as a result. The Governor of Texas recently made an offer to the Sriracha company to relocate to his State, after they were harassed by a local city council.   Governor Jerry Brown (remember him?) finally stepped in to put an end to the madness - California already has a bad enough reputation as a business-hating State.

And when businesses leave, it places the tax burdens on fewer and fewer remaining businesses (and taxpaying employees) which can cause a spiraling effect.

In the 1990's, I used to go out to "Silicon Valley" to get cases from semiconductor companies.  During the tech bust of the late 1990's, it became apparent that hardware was becoming a commodity item.  And the high costs of doing business in the Bay area made companies uncompetitive.   Many of my clients moved to Austin Texas, Boulder Colorado, or other, less costly States to do business.

Employees enjoyed the better lifestyles afforded in such places - at lower costs.  Which means employees could be paid less, but effectively make more.

Google and other tech companies have branches all over the United States and even the world.  Maybe some, like Apple (which just built a Billion-dollar flying saucer) might be stuck in California.  But others, particularly software and social media companies, can pull up roots and relocate, very rapidly.  More and more of this kind of work is done by telecommuting, anyway.

And if that happens, well, these same protesters will be decrying the "loss of jobs" and petitioning Governor Jerry Brown to "create new jobs" as if he could pull them out of a hat.

Jerry Brown, at least, has wised up over the years.  These protesters didn't get the memo.
Newer Post Older Post Home