Why the SmartPhone Industry Thinks You're Dumb. 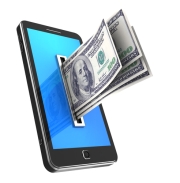 Cell Phone theft is on the rise, and it represents a major profit center for the Cell Phone Industry.

A recent article about Cell Phone Theft illustrates exactly how cynical and wicked the Smart Phone industry really is.

Smart Phone thefts are an epidemic, with an estimated 1 in 10 people getting their smart phone stolen, according to the article.

Of course, this illustrates what I have said all along - don't own anything that valuable, if you can't afford to lose it.   For me, the idea of a $600 object the size of a pack of cigarettes, that is easily lost, stolen, or damaged, makes no sense.  It is like walking around with expensive jewelry all the time.

And sadly, people have been killed for their Smartphones.

So, why not put a "kill switch" or other feature to disable a Smart Phone once it is stolen?

The car industry was arguably the same way.    Cars before the 1970's were ridiculously easy to steal.  And each stolen car represented a new car sale for the automakers, so there was no real incentive to make them harder to steal.  Government regulation, in the form of ignition locks, was mandated.

1.  The consumer buys a new phone, which is an additional sale for the Smart Phone manufacturer.

2.  The consumer ends up buying insurance for their phone, which is wildly profitable for the cell carrier.

3.  The stolen smart phone, since it is not deactivated, can be re-sold to a customer who ordinarily would not be able to afford a new one.   They activate the stolen phone and buy a service plan - which makes an additional profit for the cell carrier.

As a result, there is no real logical reason a cell carrier or Smart Phone manufacturer would want to prevent thefts - thefts represent sales and money.  Phones with a deactivation lock represent lost sales and lost money.

The industry lobby, of course, argues that such measures are unnecessary, and that adding a "kill switch" to a phone would cost money and cause headaches for consumers - if phones were inadvertently shut off somehow (how, is not stated).

But the idea has been around for a long time, and can be implemented even for existing phones.   Each phone as a unique identifying code number.   It is not hard, once a phone is stolen, to report stolen phone data to a central database.   When a thief, or the purchaser of a stolen phone, tries to activate a stolen phone, the phone company can search against the database, and deny service and report the person possessing the stolen phone to the Police.

But that idea was shot down, too, by the cell phone industry lobby.   Why?   It would cost them money to maintain such a database and check new phone service applications against it.   The cost would be minimal, particularly if shared by all carriers.

The real loss in money, of course, is the loss of a sale of service to the person who stole the phone, or bought a stolen phone.

You see, to the industry, stolen cell phones, often sold on eBay or through pawn shops or the like, represent an aspect of "incremental marginal pricing" in action.

Maybe you and I can "afford" (or think we can afford) to spend $599 on a new iPhone.   But many more can't afford it, but still want one.   The stolen phone hits their price point neatly, and since they pay the monthly service charges (which is all the carriers care about), it represents an incremental sale for the phone company.  Cutoff stolen phones, you reduce the number of service sales.

Cell phone companies, like most folks involved in telecommunications these days, are the height of sleaze.   Each company (telco, cable, wireless, internet) has their own angle they try to push, as they elbow their way to the table for their share of the feast.

And quite a feast it is.   If each American spends $100 a month on telecommunications charges, that represent about $360 Billion or a third of a Trillion, annually, spend on telecommunications.   And given that many families spend $200, $300, $400 or more on combined cell/landline/internet/cable services, this does not seem like too fantastic a number.

And it is funny, too, how this happened without anyone noticing.   Years ago, our telecommunications bills were less than $20 per month for a "land line" dial phone.  Cable TV and the Internet were not even heard of.   Cable started out at a modest $30 a month, and then escalated from there.   Today, we now have wireless, landline, cable, and internet services to contend with, and many families have all four, along with a "family plan" for their cell phones, with a new Smart Phone for each member of the family.

And most folks don't add up the total of all this - or they kid themselves they are not paying all that much, through "bundling" or the "family plan" - and will quote you the "come on price" if you ask them.

Major corporations and industry conglomerates are not your friends and never were.   The rise in cell phone thefts, and the industry's lame excuse that "nuthin' can be done about it!" are alarming.   We saw the same trend in the 1960's with regard to automobiles, and government stepped in and mandated steering column locks.   As a result, casual thefts dropped way off.  Today, car theft is a rare crime, particularly among newer cars.

And how did industry react to these changes?  The automakers, through their lobbyists, fought each regulation tooth and nail.   But then a funny thing happened - they saw that enhanced security systems actually sold cars and that people would pay extra for enhanced security measures.    Not only that, the cost to insure certain cars skyrocketed to the point where things like smart keys, alarm systems, de-mobilzation systems, and VIN number etched in major body parts, became the norm, particularly among higher-end cars.

BMW and Mercedes had a problem with this, as their cars were being stolen, not for use as cars, but to be cut up for parts and sold.   This jacked the insurance rates to the point where customers shied away from buying the cars.   The industry realized that policing itself was in their own best interests.

And perhaps the cell phone industry will realize this as well - eventually.    But at the present time, since they sell the insurance contracts and make money from them, they have little incentive to change things anytime soon.

There may, of course, be another explanation for this "rash" in cell phone thefts:  Consumer Fraud.    Yes, dropping a cell phone, even one made with "Gorilla Glass" usually means it will crack.   And most consumers can't really afford to spend $599 on a new phone.  So I wonder, how many of these "thefts" are not brazen daylight robberies, but "Gee, I set my phone down in a restaurant and someone stole it!" kind of deals, where in fact, the owner of the phone is filing a false claim, in order to get a free new phone.

Of course, the joke is on them.  The "new phone" you may get may in fact be a used phone "of equivalent value" to your old one.

But regardless, like anything else in our society, you do have choices.   And the largest choice is to choose not to play the game.   A Smart Phone is not necessary to daily living, at least not yet.   Many folks buy these phones and just talk on them, admitting that the enhanced features are beyond their capabilities (in The Villages, a Florida retirement community, they actually teach courses to oldsters on how to use their smart phones!).

You can't get "ripped off" when you refuse to consume.   And in my experience, every time in life that I chose to buy some esoteric and expensive item, it turned out to be a raw deal, cost way more than expected, had a litany of "gotchas" - and no one felt sorry for me when it went horribly wrong.

If you don't want to be shot for your Smart Phone, the easiest way to do this is to not own one.  And no, they aren't like Oxygen - you don't need it to live.
Newer Post Older Post Home