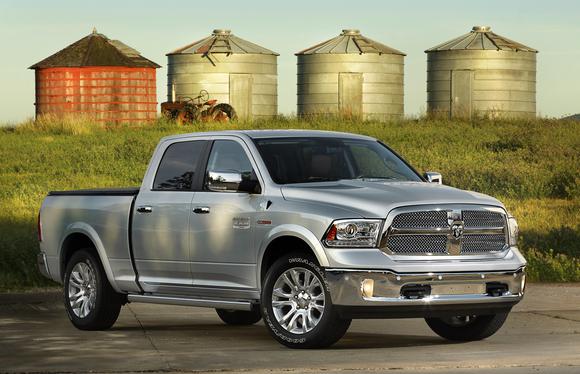 Why does one truck gain market share and another fall behind?   Price.

A recent article on Yahoo! notes that the Dodge Ram has been selling well.   The truck gained the Motor Trend Truck of the Year award and also Consumer Report's Best Truck of 2013.  Of course, ratings in car commercial magazines are often related to who buys the most ad pages.   And Consumer Reports is about the most clueless rating magazine out there.  Besides, how can you determine "quality" of a product that has only been on the market a year?   You'd have to wait 5-10 years to really find out.

This is quite odd, as in the past, Chrysler was the last of the big-3 in terms of quality - dead last.    You didn't buy a Dodge because you liked it, you bought it because it was all you could afford.

But people are claiming that Fiat has breathed new life into Chrysler and the products are far better now.   And no doubt, compared to the pre-bankruptcy dreck they were selling, they are a great improvement.

But is it quality that is selling more Dodge trucks?   Or something else?

It turns out, Chrysler has been offering steeper discounts on their trucks than competitors.  This means lower prices.

A traditional Chevy or Ford buyer might look askance at a Dodge, and wonder about the durability of it.   But if the quality issue appears to be addressed, and the price is lower, then suddenly, it becomes a viable proposition.

Dodge was offering up to $5000 in "incentives" on their trucks, while Ford and Chevy offered less.

Then a funny thing, Dodge tweaked back the incentives to $4300, and Ford and Chevy increased theirs.

Funny how that works.

But it illustrates why automakers use incentives rather than just lowering prices.

For the consumer, these incentives are just frustrating and pointless.   Why not just lower the freaking price for everyone?   That would make a lot more sense to us, for sure.

But incentives allow manufacturers to alter prices on a day-to-day basis, to push products that are selling slowly, or to reap more profits from vehicles that are in short supply.    This is an optimal pricing strategy than from an economist's point of view, is the most efficient use of the market.

Incentives are frustrating for the consumer as they expire or change over time.   At the end of the year, they are increased to clear out old inventory.   And so long as you don't mind owning "last year's model" this could be a bargain for you.   However, since vehicles are valued based on model year, it also means when you buy last year's model, it has already fallen down that depreciation curve quite a bit.   If you plan on keeping the vehicle a long time, this is less of an issue.  If you are buy-and-trade kind of person, this bites you on the butt.

Other incentives are more specific to who is buying, and frankly, I don't understand why some of them are offered.   $500 or $1000 incentives for "recent college grads" don't make much sense to me.   What is the point of rewarding a part of our society that is already privileged?   And besides, most college grads are already saddled with student loan debt and cannot afford a new car.    Maybe this is an incentive to get Mom and Dad to buy a car as a graduation gift or something.

Others are offered for military veterans, who probably deserve a break these days.   But if we are going to reward people based on their economic condition, shouldn't we give discounts for minorities (that would be illegal) or based on their last year's tax return (unworkable and Socialism!).

Customer loyalty incentives also seem kind of pointless, at least at first.   But if you trade in your Dodge for a new Dodge, the dealer can play lots of trade-in games and make more money.   And I suppose $500 is worth it to develop "brand loyalty" among the plebes.

But of course, the best way to buy a car is used, as you don't have to play these games in the first place.   The price of a used car doesn't vary from day to day, other than to go downward.   You don't have to "buy this weekend, or lose the rebate!" or any such nonsense (another reason for incentives - to pressure buyers to buy!).   And of course, it goes without saying that you avoid the horrific depreciation on a new car, when you buy used.