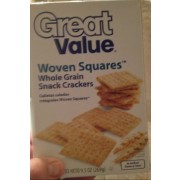 Wal-Mart brand "Woven Squares" crackers were identical to Triscuits (with less salt) but less than half the price.   Today, you can't find these at most Wal-Marts.  In the past, when they were stocked, they disappeared from the shelves very quickly.

Why these three items?

1.  Wal-Mart Woven Squares are less than half the price of Nabisco Triscuits, and I believe taste better, as they have less salt.

3.  The "Brick 'o Cheese" is perfect for morning egg sandwiches or for hamburgers or for lunch sandwiches and melts easily, and isn't a "processed cheese food" (whatever that is!) but rather real cheese.  It is also very cheap.

So we come back only with the brick of cheese.   What happened?   Good Question.

Nabisco now has an entire section (a tier of five shelves) devoted to the Triscuit brand.  Triscuits now come in different flavors, different package sizes, and even different shapes (triangles) and as a result, they have more shelf space to display them.   Companies often pay retailers for this shelf space.  Act shocked.

In the past, the "Woven Squares" crackers were hard enough to find, being on a lower shelf, often away from the Triscuits, and only stocked five or ten at a time.   Usually, they were out of stock, and when they were in stock, persons such as myself would buy all the product available.

But today, the product doesn't even have a slot on the shelf (empty or stocked) and the product is not listed on the Wal-Mart website.  What gives?

I am not sure, but it could be one of three things:

1.  Nabisco sent a cease-and-desist letter to Wal-Mart alleging some intellectual property rights infringement.   Wal-Mart did just recently re-design the box for "Woven Squares" in a yellow format that looked a lot like the Triscuit box (ironically, Nabisco has made the "old school" original Triscuit box look more like a generic brand by using plain and small lettering on the packaging!).  So it could have been a "trade dress" issue, perhaps.  I doubt any Patents on Triscuits are still in force.

2.  Nabisco pressured Wal-Mart to drop their house brand or to de-emphasize it.  Given the volume of product Nabisco sells through Wal-Mart and the value of the Triscuit brand (which has the largest shelf space of any Nabisco cracker, or indeed any cracker in the cracker aisle!) they could have "struck a deal" with Wal-Mart to drop or de-emphasize the store-brand crackers.

3.  Wal-Mart may have decided that they make more money selling $3.50 boxes of Nabisco crackers than they do selling $1.50 boxes of "Great Value" brand crackers, and decided to drop or de-emphasize their house brand.

The point is, this shit doesn't happen by accident.   The design of the boxes, the amount of shelf space, the placement on the "plan-o-gram" (a diagram given to store employees for stocking shelves) are thought out very carefully by dozens of people high up in these corporations.   If you think that box designs and product placement is just done willy-nilly, think again.   The modern grocery store is a machine that is carefully designed, like a casino, to separate you from your money.

(Speaking of which, which flavor of Triscuits do you think is the most popular?  At the Wal-Mart in Jacksonville, there was a "hole" in the section for "cracked pepper and olive oil" flavor.   Was this a popular flavor (it is not bad) or something else?    I noted that the particular flavor was halfway up the shelving (at eye level) and at the very right.   It may be a popular flavor, or it may just be that people grab what is at eye level, and what is to the right.   Placement of products on shelves often determines what sells.)

So, why would Wal-Mart even have these store brands, if they don't intend to sell them?   Why offer good products at low prices and then chronically under-stock the shelves?

I think the answer is that they know people want these products (as evidenced by the HOLES in the shelves where they are normally stocked) but will take the higher-priced "brand name" product as a substitute (particularly when you say it is "on sale" with a little red flaggy deal sticking out into the aisle) and thus increase your profits.

Maybe not.  At least to me, I felt like I was being cheated, baited, manipulated, and used.   We declined to buy any Nabisco product.

The English Muffin thing was also weird.   Sold in the refrigerated dairy case (far away from the large Thomas' display, which like Triscuits, takes up a whole section now, with different flavors and types) the 12-pack of Wal-Mart English Muffins was a good value.   They had no sugar and were 10 calories lower as a result.   They also toasted better (Thomas' often turn into shrunken dry pucks in the toaster).

First, Wal-Mart decided to drop the 12-pack offering, instead using a 6-pack of muffins.  And then even that disappeared, at least during our recent visit.  Do we spend $3 on 12 muffins, or over $4 on a package of six trademarked Thomas' muffins?

Well, at least they still had the cheese.

It may be the Wal-Mart we visited was stocked differently than the one closer to home (which is a Ghetto Wal-Mart).   The Wal-Mart in Jacksonville was in a more upscale neighborhood, and the people shopping there were buying more brand-name items.   Again, this sort of thing is thought about, very carefully.   They don't just throw product on the shelves willy-nilly.  Computer algorithms determine what sells and what doesn't, at different stores, and different stores may be stocked differently.   People are paid - a lot of money - to think about these things.

So what's the upshot of all of this?   Well, food prices are going up, that's for sure.   And some of the best bargains from the depths of the 2009 recession are starting to evaporate, as the economy recovers.  And retailers are playing games with us, trying to induce us to spend more.

What's more, now that the Woven Square crackers and other store brands are disappearing, there will be little incentive for the "brand name" producers to lower their prices, in response to competition.   This does not bode well for consumers.

But the most interesting thing I noticed was my change in behavior.   Ten years ago, I would have never looked at the price or calorie content of a package of Crackers or English Muffins.  I bought brand name products and tossed them in the cart, and just paid the asking prices, without thinking.   After all, I was "rich" and could "afford" to do so.

Today, nearing retirement and realizing that the amount of money I have to spend in life is a finite amount, I have a much different attitude about the pricing of things - even trivial things.

And I think this is a change for the better.