Why Lawyers Make More than UPS Drivers (or should) 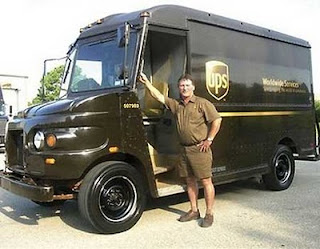 While physically demanding, driving a UPS truck or working in a factory does not involve a lot of worrying.


(Note:  This is an older post I started working on a long time ago and just got around to finishing.)

While working my way through school, I worked briefly as a Teamster for United Parcel.  It was a fun job, for the whopping sum of $8 an hour, which I felt lucky to get.  And although it was a lot of work physically, washing the package cars, humping the box line and loading package cars, it was pretty mindless work.  You could wear your Sony Walkman (remember those?) to work and just zone out all day long.

At the end of the day, you went home and had a beer.  Nothing to worry about, no responsibilities, no deadlines, no liabilities.  The worst that could happen would be if you mis-loaded a box on a package car and the driver would leave you a nasty note.

Being a Lawyer, on the other hand, is no fun at all.   You worry - a lot.   Your clients entrust you with legal matters, and you can work as hard as you can, but you cannot guarantee an outcome.   If they don't have a very good case, they will lose.  And when they lose, often they blame their Lawyer.  And sometimes they sue their Lawyer, and because of that, you have to carry at least a Million dollars of malpractice coverage - perhaps several million.

For Doctors, it is even worse.  While a Lawyer might end up with a client on Death Row once in a lifetime, a Doctor buries a good portion of his patients, if he practices long enough.  And the worry that perhaps you didn't do enough, or something was overlooked, can be overwhelming.  And of course there are legions of Lawyers out there ready to sue you, if you are even perceived as possibly making a mistake - or even if you did nothing wrong whatsoever.

And the reward for all this worry?  Not as much as you might think.  Many Doctors barely make a six-figure salary, and Lawyers today are lucky to be making that much, in many markets.    These risk-taking jobs are not compensated with corresponding rewards.

Meanwhile, folks having jobs with no responsibilities often end up making about as much, if not more.   A School teacher has few worries - teaching the same lesson plan year in and year out.  Yet many make more than some Doctors and Lawyers - over $100,000 a year in some celebrated cases.

Until recently, a UPS driver made some pretty good dough, thanks to the Union - and still has pretty good benefits.  The self-employed?  They have to fend for themselves.  If you risk all of your life savings on a new business, chances are, you will fail.  Even if you succeed, you may make less than some slug with a mindless, no-risk, no-worry job.

And if you do succeed and make tons and tons of money?   Legions of slackers will say you don't deserve the money, because you are just a rotten 1%'er who didn't do anything to earn it.

Yet a lot of people don't get this.  They assume a job is a job, and everyone deserves to make a "living wage" which includes enough dough to get cable TV, a smart phone, and a new car every three years.  That is a LOT of money, for a job with no real risk-taking or worry.

The downside to the drone job, is, of course, that you have to keep doing it, day in, day out, for 20-30 years, before they let you retire.  And while you get weekends and Federal Holidays off, your only extended vacation might be two weeks a year, if that.   It is a hamster wheel.

For a brief period of time in this country, you could make a lot of money at a drone job, provided it was a union job with a company making a lot of money.   When I was at GM, back in 1980, a forklift driver could make $42,000 a year, with overtime (I reviewed the payroll for the entire plant) which by some measures, would be $115,000 today.  That is a lot of money for a job that requires ten minutes of training.

Today, we are seeing these wages decline, as the companies that once paid them, no longer have the cash to do so, and the unions representing the workers decline in power and scope.   And at the same time, we are seeing wages for the professions (the worry-jobs) stall, as more and more people try to get into the professions, as a way of preserving their middle-class lifestyle.

There reaches a point, however, where folks will just start to think that taking on a "worry-job" isn't worth the worry.   Why?  Because it becomes all risk and no reward.  All worry and no payoff.   You'd make more on the assembly line and never worry about a thing.

And at that point, maybe wages for these sorts of worry-jobs would increase.  Perhaps.  Perhaps not.   There has to be some sort of reward for taking on this additional stress.  And in our society, this reward is often lacking.   As a professional, you might make twice as much as some guy at a drone job.  This sounds like a lot, until you calculate out your taxes and realize that the two of you have the same amount of disposable income when it is all said and done.

And the worst thing the guy on the assembly line has to worry about is losing his job.   For a Lawyer or a Doctor or a Small Businessman, they worry about losing their job - and losing everything they have worked for, over a lifetime.

Gee, that never happens to the folks who say, "would you like fries with that?" - does it?

And that, in a nutshell is why we don't pay folks like that very much.   Their job is no stress, no worry, and at the end of the shift, they don't take their job home with them.

When we stop rewarding risk-takers, and reward the plebes and drones instead (or as much) then there is no incentive whatsoever to be a risk-taker.    You might as well get a drone job.

And that, I think is the worry of some folks in this country, as risk-taking ends up being punished, more and more.
Newer Post Older Post Home