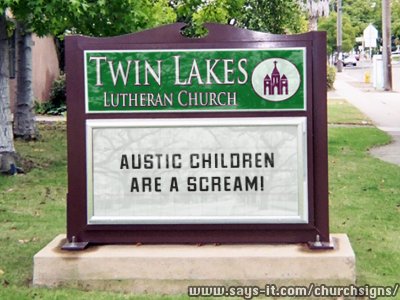 Prepare to be outraged.


A reader wrote in her blog that she likes reading my blog, although sometimes she is outraged by what I write.   Well, dear reader, prepare to be outraged again.   If I hold back and try to "play nice" then I might as well just stop writing, as there would be nothing to say, other than to put up a happy face and a "have a nice day!" sign.

The reader in question has a blog concerning Asperger syndrome, which is a popular disease as of late, as are all Autism Spectral disorders.  Asperger's is basically a very mild form of Autism, and if you read the symptoms of it (which are all behavioral) it is not hard to convince yourself you might have it.   To some extent, I believe, there is a lot of self-diagnosing of Asperger syndrome going on these days, particularly by parents (see my posting on Munchhausen Syndrome by Proxy).

To understand Asperger's you have to first understand Autism.  And diagnosis of Autism is on the rise these days, but I think more because of the increased awareness of "Autism Spectral Disorders" rather than any real rise in the number of severely Austic people.  You know if someone is Austic - there is no mistaking that.  But Asperger's is much more difficult to diagnose, and thus it is easier to misdiagnose it.  And there is a lot of self-diagnosis and doctor-shopping going on.

Real Autism isn't funny or cute like Dustin Hoffman in "Rain Man."   I had a friend who worked with Autistic and retarded adolescents and adults.  It was hard work and very challenging.   With the retarded kids, it can be rewarding, as they communicate and want to be a part of the greater world.  The facility he worked in ran a restaurant staffed by the retarded, and I used to visit him there regularly, on my lunch hour.

He also cared to Autistic adolescents and adults, and this part of his job was a lot harder.   Many were there as a part of an adult day-care program, giving their parents a breather so they could do things like shop and clean the house and whatnot.  Having an Autistic child, particularly a severely Autistic child, can be a lifelong commitment and a full-time job, seven days a week with no vacation.

We would go for walks with "Nancy" who was one of his patients.   She was about 30 and almost catatonic, as she did not respond, or hardly responded to other people (she did, but you had to have worked with her for months, to appreciate her feedback).   She wore a polka-dot dress from the 1960's and platform shoes.  It was cold out and I asked my friend why she was dressed so inappropriately.

"She will wear nothing else," he replied.   It turns out she fixated on this outfit at an early age, and if her parents tried to get her to wear anything else, she would scream at the top of her lungs as if she were being burned by hot water.   Her parents finally gave in and went back to the store and bought up every copy of the dress (and the shoes) in her size.  Over the years, they have had to replace the dresses many times, but once the manufacturer stopped making them, they had to hire a seamstress to make them from fabric they had to go out and find.

And any new dress had to be put into her dresser drawer for at least a month, so it would acquire the same smells as the other dresses - or the screaming would begin again.

I asked him what caused this and whether there was a cure.  And the story is pretty frightening.   No one really knows what causes Autism.  Many psychologists thought it was cold, indifferent parents (the "refrigerator parent" theory) that caused the disorder.  This has since been discredited and also seen as especially cruel - blaming the parents for their child's disorder.

As for a cure, well, if you don't know what causes it, how can you cure it?   For people with severe Autism, life can be difficult.   They will likely outlive their parents and end up institutionalized.   For the parents, it can be equally as difficult, as things like vacations and retirement plans might have to be changed.

Some parents, however, take this in stride.  I've seen folks with Autistic children, with bumper stickers that say "I love my Autistic Child!"   I do too.  I think they're a scream, quite literally.  I am not sure I could handle that as well as they could.  In fact, I am sure I could not.  My hat is off to them.

Diagnosing Autism is not as hard as Asperger's.  The behaviors are so extreme that they are readily apparent.  Asperger's, on the other hand, is more subtle, and it is all-too-easy to make an armchair diagnosis of Asperger's.  And as more magazine articles and television shows are made covering this syndrome, well, awareness has gone up - as has diagnosis.
The reader also wonders if I have Asperger syndrome.  And in response, I would say the question is irrelevant.

Why?  Well, first of all, the diagnosis is based on fairly subtle observed behaviors, not some physical aspect of the body that be measured.   So it is easy to self-diagnose Asperger syndrome or be mis-diagnosed with it.   Second, there is no "cure" for Asperger syndrome (if indeed such a "cure" were even needed - people with this syndrome often function very well in society).   So once you are diagnosed, what do you do?   Nothing.

So like I say, it is kind of irrelevant.

But I think it is dangerous in our society these days when diseases become popular in the press and get reported a lot and then people start to popularize them.   Remember "Chronic Fatigue Syndrome?"   No one gets that anymore because it was an 1980's disease and we've all moved on to "Fibromyalgia".

Remember Lyme Disease?  We were all supposed to get this from ticks, yet the reported incidence of the disease remains small - compared to public awareness of it.   If you walk in the woods and get bit by a tick, you might get it - and it might never be properly diagnosed.   You can either stay home and cower under your bed, or wear bug spray when you walk in the woods, and move on with life.   The popularization of Lyme Disease really hasn't accomplished much in terms of prevention or diagnoses.

And the same is true with Asperger syndrome.   It is all-too-easy to think that you (or your child) may have this disease, as the diagnoses is based on behavior.   Are you clumsy and poorly coordinated?  Do you walk around like Frankenstein (clump, clump, clump!)?   Maybe you have Asperger's!   Do you have difficulty with non-verbal communication?   Do you tend to focus on one intense interest at a time?   Maybe you have Asperger's!

Or.... maybe you are just clumsy.   It happens.  Not all of us are ballet dancers. In fact, few are.   Communication skills are lacking in all of us - particularly in this day and age.   And being focused on one interest - well that is the definition of modern man.  We are all specialists in this day and age.

Which is why people diagnosed with Asperger's can and often are high-functioning people in this country.   Or maybe, people are misdiagnosed.

And sadly, people are not content to diagnose this in themselves or their children, but have taken to applying the label to others - and even those from the past, long dead.   Did Abraham Lincoln have Asperger's?   (We all know by now that he was Gay, right?  The poor dead! They cannot rest in peace).  The label has in fact be flung at me, as I noted above.

But even if the label sticks, what do you do about it?  Again, the cure is, well, "nothing".   And funny thing, many kids diagnosed with this illness (no doubt by their Moms) tend to "grow out of it" - I suspect about the same time they move out of the house.

Of course, one young man diagnosed with this malady recently made headlines when he shot up an elementary school.   I suspect, however, that he did not have Asperger's but rather was a run-of-the-mill Schizophrenic whose sicko Mom doctor-shopped until she found the diagnoses that matched what she learned from a magazine.   This is the same Mom who took Junior to the gun range and bought him firearms, thinking it would help his mental condition - it didn't.  There is a real danger in kitchen-table diagnosis of diseases.

But for the rest of us, the real danger lies in obsessing about something in our lives that really cannot be changed or altered, no matter how much we obsess about it.  Turning any disease or illness (particularly mental illness) into a hobby is a dangerous thing, as we then tend to view our lives through the lens of our illnesses - and become "sufferers" rather than human beings.

I do suffer from some long-term medical problems.  But I'd rather not talk about them.   Why?  Because I don't want to end up as one of those people who just talks about their aches and pains and other symptoms, or who spends all their time on a disease website - or ends up viewing their lives through the prism of an illness, disease, or syndrome.

And sadly, I've known a number of people who have done just that.   Life passes them by while they spend their time naval-gazing and looking inwardly.   Look outwardly, take control of your life, be yourself, not a disease!   Live!

Is that really such an outrageous or offensive thing to say?

Now, don't get me started on ADHD!   Some folks, it seems, just can't come to grips with the fact that their kids aren't little carbon copies of themselves, and have to go looking for explanations as to why Junior isn't doing well in school.   Junior is stupid.  Just scrap those college plans and get him into Vo-Tech training.   He'll probably end up making more money that you!
Newer Post Older Post Home