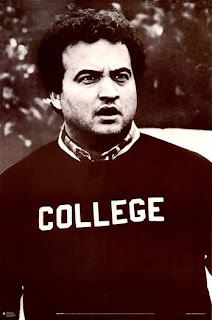 College today is the new High School.  So it is no surprise to me that many college grads end up on jobs that don't require a college education.  Besides, how is a degree in Art History going to "qualify" you for a job?


This CNN report tells another story:


"Though the demand for college graduates rebounded after the Great Recession, it has leveled off over the past 18 months, according to new Federal Reserve Bank of New York research.

This is not to say that recent grads aren't getting jobs. In fact, their unemployment rate has fallen to just over 5%, down from a peak of slightly more than 7% in 2011. And it's less than half the rate of young workers who don't have a bachelor's degree.

But many recent grads are underemployed, working in jobs that don't require degrees. The underemployment rate has been on the rise since 2003 and now stands at 46%"

In other words, these folks all have jobs, but not the jobs they think they are entitled to.

Emphasis on the word "entitled".

I had a dream last night that colleges started offering majors in "Celebrity".   After all, it is a career path, and why not train and groom our celebrities through college education, rather than the haphazard way we choose our celebrities today?  It would avoid that whole Justin-Beber syndrome.

But of course, I am being sarcastic.   Just because you major in something - or a college offers a major in something - is no guarantee you will find a job in that field, or indeed that you will be entitled to one (Engineering and Medicine perhaps being one of the few exceptions to this rule - but those majors do interfere with the all-important partying aspect of college).

Over the last several decades, our government and our politicians have pushed this idea that "everyone who wants to go to college should have the chance to" - which was a swell idea.  Sadly, it somehow got morphed into "Everyone should go to college" and today, more people go to college, as a percentage of our population, than ever before.

People graduate from colleges with worthless undergraduate degrees.  And the sheer number of graduates is more than the job market can absorb - for traditional "college degree" jobs.   And like anything else, the law of supply and demand kicks in.

And I am serious about this.  One of my ancestors taught in a one-room schoolhouse in Pompey, New York, and the high school kids had to learn Greek and Latin, as well as master geometry and trigonometry.  It was taken for granted that they should be able to speak and read their native tongue (English) as well.   Today?  Well, they're barely able to handle English.

And my ancestor's experience wasn't an anomaly.   Look at the curriculum of any high school even just a few decades back.  The coursework required was much higher and more challenging.   Today, they don't even teach Latin in most schools.   Heck, anything that is not on a standardized test is chucked.   And we wonder why no one wants to hire these kids.

Maybe the government should create jobs where the only duty is to fill out standardized tests all day long - we have trained an entire generation for that job!

It is funny, but kids learn so little these days.   I learned how to use machine tools in shop class.  I learned the art of lost-wax casting in Art class.   I even made a stab at trying to play the piano and the cello.  I learned enough French in four years to be able to order off the menu in Paris and make a hotel reservation at least (not bad for a "C" student).  All of these skills came in handy in life.  I feel sorry for kids today who have had these programs cut.

And as you might imagine, English and writing classes certainly helped me - along with typing.   I recall telling one young person that typing was a valuable skill to learn in this age of computers.   Her response was "I don't want to be no damned secretary!" - as if that was all typing was good for.  The joke is, of course, the job of "Secretary" is rapidly evaporating, as people are expected to be able to type all of their own documents these days.  Those who can't type, wither on the vine.

Oh, and my young friend who "didn't want to be a damn secretary"?  She ended up being a damn waitress.

And that right there is the problem with "kids these days".   Everyone wants some high-paying status job with a corner office, few duties, and a huge paycheck.   I blame television shows like "The Office" which perpetuate such stereotypes.   Sadly, few such jobs exist.

So, kids go off to college because things like learning to weld or how to wire a house are "beneath them" and they graduate with a worthless college degree in Anthropology (and $40,000 in student loan debt) and work in the service industry at dead-end low-wage and minimum-wage jobs.  They then blame Wall Street for their woes.

Meanwhile, the "dumb" kid who went to welding school or became an apprentice electrician, ends up owning his own company after a decade or so.   It ain't glamorous perhaps, but it is a degree of financial independence and security.

But of course, this posting is worthless.  It won't convince some 18-year-old that maybe going to Party University and getting drunk for four years is maybe a bad idea.   Worse yet, it won't convince his parents, who are scared to death that if junior doesn't leave home at age 18, they'll be stuck with him for life.   And what will the neighbors think, if he goes to welding school?   Again, people care more about what other people think - including people they don't even know or barely know - than what they think about themselves.

A friend of mine in Buffalo mentioned that in that town, there is a shortage of skilled tradespeople.   Down at the Union Hall, they are looking at a crises.  Most of the skilled tradesmen are aging and near or at retirement age.   There is no one in the pipeline to replace them, either.

Sadly, young people with the requisite skills, motivation, and education are lacking.   And the few getting into the business often do so after starting out in another career - perhaps even after wasting a lot of time and energy going to college and then trying to find a college-type job.

Almost everyone ends up finding themselves in their career or life this way.  I know I did.   Everything I learned along the way helped me out in one way or another later on in life.   College was a 14-year part-time experience for me, and I was able to steer that experience based on where my interests took me, rather than cram four years of knowledge all at once - with no idea where I was going with it, if anywhere.

Since then, things have changed, dramatically.  College is now hyper-expensive and nasty new student loan products are out there, which kids willingly sign.   You can really screw things up these days, at age 18, and end up paying for it for the rest of your life.

Maybe college isn't worth a mortgage on your career.   Just a thought!