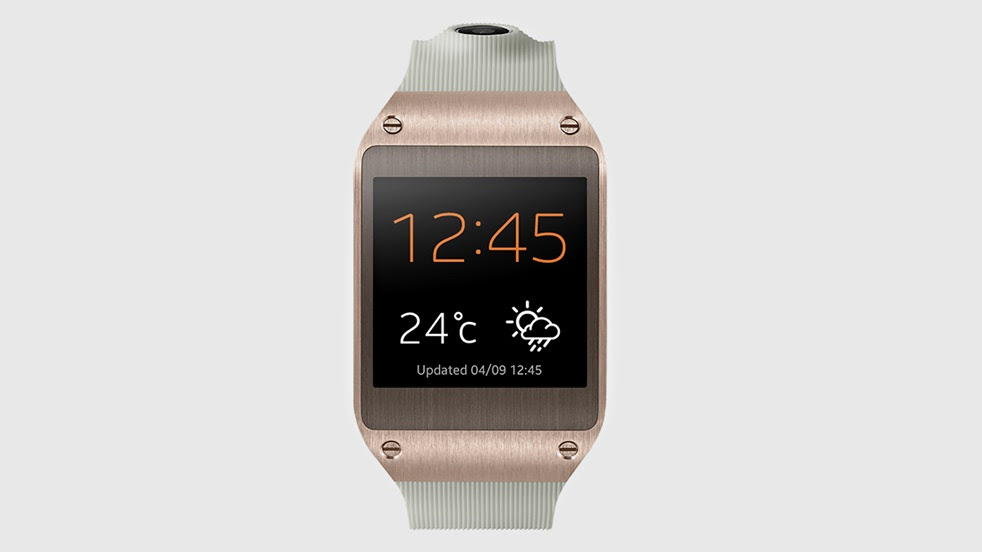 We are told that the Apple iWatch is going to change the marketplace!  Yet other wearable watch phones (such as the Samsung, shown above) have been on the market for years, and have yet to change anything.

The media is going nuts over Apple again.  Bloomberg seems to love Apple stories, talking about Apple with bated breath.  I think they want to date Apple and go "all the way" in the back seat of Dad's Fury III.  Sheesh.

Yes, Apple has a decent P/E ratio for a tech company (less than 20, which compared to others, in the hundreds, is favorable).   But on the other hand, we are still talking about a tech company - and tech companies live and die by their next product announcement.   People seem to forget how many tech companies that once seemed like industry leaders have fallen by the wayside, when a new product fails to turn out as expected, or worse - a competitor offers a better product at a lower price.  Silicon valley is littered with the bones of such companies (or their hollow shells).

Apple's market model is premised on each new product being a "home run" with each product release being treated like a rock concert.  The Apple faithful line up at the Apple stores, in sleeping bags, overnight, to get the newest and latest Apple product.  Well, that happened for a while anyway.  I am not sure anyone is lining up for the latest O/S release or a new Apple watch.

And will wearable computers really be the next big thing?   Like I said, the Samsung watch (of which there are now three generations) hasn't really taken off in a big way.  It is a neat technical trick, but no one seems to have bitten on it yet.   Will a generation that has never worn watches suddenly decide that they need something on their wrist?   Who knows?  Maybe haberdashery will come back as well.

And then there is the the backlash against wearable computers.   Maybe watches will be accepted.  Maybe not.   Google has run into a wall with "Glass" in that people feel creeped out that a person wearing "Glass" (who looks like a dork, BTW) is filming them.   They even have a name for it - "Glassholes".

About two decades ago, I was at a party, and a friend of mine showed up with a watch that was also a primitive digital camera.   It was a neat party gag, as he went around taking surreptitious candid photos of people.   It was funny for a bit, but then folks got a little weird.  They felt, well, violated a bit.   And the idea of someone with such a watch-camera standing next to you at the urinal, well, was creepy.  Bear in mind that was in the 1990's.   My friend put away the watch-camera and never took it out again, the reaction was that negative.   I wonder if a "Glassholes" effect will hit the iWatch as well.

But again, who wears watches these days?   No one.  Which is why the Samsung phone watch isn't on everyone's wrists already.  The iWatch, in addition to being a "me too!" product, just isn't going to be as popular as the phone and pad.

But the name of the game at Apple is to sell the sizzle.  And Apple's press conferences had the air of a revival meeting, particularly when Steve Jobs was still around (he is alive and well and living in Argentina, according to Twitter).   But the new guy?  Maybe not such a big deal.

So they try to prime the pump.   The latest gaffe was automatically downloading a new U2 album to everyone's Apple device, as part of a free giveaway.   This was a marketing fiasco akin to Oprah Winfrey's giving away Pontiac G6's to homeless people.  "Pontiac - the car of the homeless!" - that basically killed off the entire Pontiac Motor Division.   And people say Oprah has no power.  She bankrupted GM!

The same was true with the U2 giveaway.   Something forced onto people for free isn't appreciated.   And if it is free, people assume it is crap.   I was never a big U2/Bono fan, but let's face it, their "Sell by" date passed a long time ago.   And if they had a chance at a comeback, well, this promotion blew it.   A whole new generation of listeners has learned that U2 sucks and they can't even give away their albums (angry Apple users demanded that the material be deleted from their i-devices).   The promotion backfired, in a big way.

But that is not likely to sink Apple or even affect the stock price.   It is indicative of what is wrong with Apple, at a fundamental level.   Again, Apple's marketing plan is based on hitting home runs every time.  And not just home runs, but out-of-the-ballpark-bases-loaded-winning-the-world-series kind of plays.  Each product has to be a "must have" product, or otherwise, they can't make money on it, even at their inflated prices.

Apple products are OK, although many folks point out that their limited universe has its limitations.   There are certain things you can't do with Apple devices that you can do with more open architecture type devices.   And the marketplace likes open-architecture and has spoken loudly in this regard.

While the media TALKS about Apple a lot, the reality is, the smart phone industry is dominated by Android - with about 60% of the market.  Apple has only 30%, if that.   And the same is true for the computer business, only moreso.  Mac computers are horrifically expensive - thousands of dollars apiece.   PC-based computers cost hundreds, and not surprisingly have well over 90% of the computer market    For the price of one Mac computer, you can own five or more PCs.

And even those who were once Mac die-hards, are leaving the fold.   While the Mac had the initial advantage over the PC for graphics, music, and art applications, newer more powerful PCs have largely caught up in this regard.   In industry, the PC dominates.  In fact, the people who design components for Apple do so on PCs, not Macs.  That sort of says it all, doesn't it?

Apple stays in business by charging far more than its competitors for its products.   And so long as owning an Apple product is seen as stylish and trendy, they can continue to charge these sort of prices and get away with it.   But make no mistake about it, the company is a niche player in all of its markets.   And niche players can fall by the wayside in a real hurry.

The problem for Apple, long-term, is that they have no future "home run" products to generate the huge revenues needed to keep their huge infrastructure (now made huger by the new "flying saucer" campus, which will become a white elephant in short order).   The Apple iWatch is neat, sure.  But is it as groundbreaking as the iPhone was?   Are people going to line up around the block for one?   No.  That sort of buzz has faded, and perhaps folks are a little more jaded about electronic jewelry in this day and age.

And if you look at this history of Apple, you will see that this pattern has repeated itself.   Apple was wildly successful in the 1980s.  They bloated up, assuming that success would continue.  The PC then trounced the Mac in a big way, and Apple lost its way until they developed the iPod.   Apple was able to maintain a monopoly share of the iPod market by buying up the first two year's production of the new 1" hard drives.  By the time the competition could tool up, Apple had the accessories market tied to its proprietary interface.

And a funny thing, Microsoft failed miserably with its "music rental" model of the Zune.   But today, more young people stream music on their phones, than buy it.  And old farts like me are finding it easier to just load music onto a thumb drive (which will play on most car radios, computers, and other devices) than to dick around with the clunky iPod and iTunes interface.

And that is the nature of the beast.  Apple has to come up with a new revolutionary device, or fail.  They lost the personal computer and laptop market to the PC.  Maintaining the Mac, for such as small market share, at this point, has to be a loss-leader for them.   The iPod was a home run, but is largely irrelevant today.   And then there is the iPhone....

Smart phone penetration of the marketplace is pretty much complete at this point.   And the winner is.... not Apple.  The vast majority of smart phones out there are, and will continue to be, third party providers.

So, what is Apple's next big thing that they can charge 2-5 times market value for?   I'm not seeing it.  And with an aging demographic facing retirement, I'm not seeing masses of people flocking to lay down hundreds of dollars on the latest electronic toys.  Hardware is a commodity - the PC business taught us that.   Apple didn't get the memo, apparently.

UPDATE:  Apparently I am not the only one who thinks that Apple's high overhead isn't going to be maintained by Apple Pay or Apple watches or the latest O/S release.

You need to come up with something that is vastly better than the next best thing," he told CNN's Erin Burnett in an interview airing on OutFront at 7pm ET Tuesday.

Aye, there's the rub.   Out-of-the-ballpark products are not something that happen every day, or indeed something you can plan for.  And given the various media interests involved, I am not sure "Apple TV" would be a success.

The marketplace likes open-source products.   Would you watch television if all you could get was one channel?  Of course not.  That is sort of the premise of Apple TV.

Sadly, all the big firms (Apple, Microsoft, Google) are trying to "control" their customers and steer them into these insulated self-contained closed worlds.   Living in Googleworld is starting to feel a little stifling to me.   I expect to move my e-mail to a third-party provider in short order.   Google is way too creepy.   And Apple has the same problem.

Perhaps there won't be any "next big thing" products in the future - just "apps" which each have their 15 minutes of fame....
Newer Post Older Post Home