The Oil Boom - and Bust 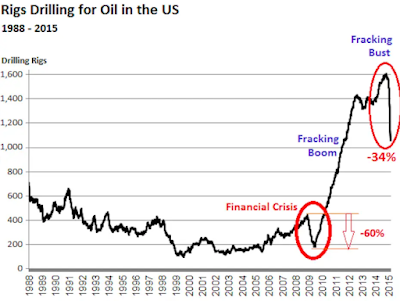 The current oil bust was as predictable as the real estate bust.


I met a man in Montana who told me his son was making close to $200,000 a year in the oil fields during the fracking boom.  He bought a $67,000 pickup truck, financed over 72 months, when he was age 22.  I didn't even know you could spend that much money on a pickup truck.

Of course, now he's 25 and halfway through his loan payments and the price of oil went from $90 a barrel to $45.   The overtime went first - the 60-70 hours a week he was working (or more) was a huge chunk of his paycheck, with the overtime at time-and-a-half or even double-time.   Down to 40 hours a week, his take-home pay is more than cut in half.

But the loans he took out, to buy the truck, a car for the wife, a new house, a jet ski and a Harley, well, they are still due.

His employer is now saying they want him to come in one day a work for free, which is clearly illegal.  But since they have so many people on the payroll, they can simply fire anyone who doesn't go along with this.  And he went along with this.   He has to decide which bills to pay every month.  He tries to sell the toys he bought, but there are no takers up there right now, and the loan balances are higher than the resale values.   Repossession is in the cards.

Any of this sound familiar?   I mean, we just went through something similar in 2009.   Ah, but human financial memory is only about 18 months long, from what I can discern.  No one I know can remember what the price of gas was, during the last days of the Bush Administration ($5 a gallon) but they can tell you when it goes up today from $2.50 to $2.55.

Up in Edmonton, Alberta, the same thing is happening.  The oil sands project is supporting the local government through taxes on the oil.   Oil revenue is now cut in half.  Do the math on that.   People are getting laid off, crime is going up.

It is the same old story, one we have heard many times.  Oil booms - and busts - have occurred in America ever since the first oil wells were drilled.   You hire a lot of people to drill wells.  Once they are drilled, you lay off the people whose job it was to drill.  You pump out the oil, and eventually the well gives out.   Then you lay off the people who did the pumping.  While we still have "Pennzoil" motor oil, little oil comes out of the once oil-rich region of Pennsylvania.

It is like any mining operation - there is intense activity, followed by a slackening of effort, and then eventual abandonment of the entire area.   Ghost towns throughout the old West attest to this pattern.

So it should come as no surprise to anyone working in the fracking business or the tar sands business that eventually, the boom would falter.  While the Bakken formation contains a lot of oil, some experts believe that in a decade or so, it will all be pumped out.   And once the price of oil goes below a certain level, there is no economic incentive to frack - which is a far more expensive procedure than mere drilling.

Yet many people failed to see this.  We saw housing developments going up in rural North Dakota, fueled by the fracking boom.  People though a temporary job was a way of life, not just an opportunity to make a lot of money in a very short period of time and then move on.   The smart ones lived in an RV at Wal-Mart and banked their paychecks.  The dumb ones bought homes, cars, and toys, and thought it would go on forever.

It is sad, but then again, our financial system routinely punishes people who are not very smart, or who fail to think things through - or who fail to learn from history.

We saw this in 2009, when people said, "How could we have known that housing prices would plummet so dramatically?"   And the answer is, of course, because they saw the same thing happen 20 years earlier in 1989.   Moreover, anyone with half a brain who bothered to think about it would have seen that double-digit housing price inflation was not sustainable for the long haul.  Eventually, people cannot afford to buy and stop buying.  And yes, there are alternatives to overpriced condos and look-at-me mini-mansions.

So I don't really "feel sorry" for the dude in the $67,000 pickup truck, who likely was the asshole who nearly ran me off the road.  I am sure he is blaming Obama for all of his woes, or otherwise externalizing all of his difficulties onto other, unseen actors.   I mean, come on, he bought a $67,000 pickup truck on time, right?   Not a real brain trust, to be sure.

It is tempting to spend more and buy nice things.  I get a lot of ribbing in the RV park because our tiny trailer is the smallest RV in the place (and no doubt the cheapest).  How could I possibly live without a washer/dryer or fireplace in my camper?   Very well, thank you.   And the money saved is money I don't have to earn - money I can live off of and put to work making more money for me.

We all make choices.   And most of the choices we make are stupid ones, based on status and other idiotic ideas.  I know this as I used to make choices like that myself.  Fortunately, when I was young, they didn't make $67,000 pickup trucks or offer 72 month loans to 22-year-olds.
Newer Post Older Post Home