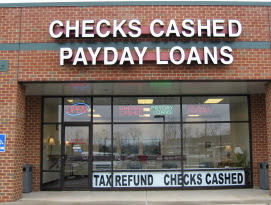 
A recent article online laments that income inequality is "forcing" people in Australia to take out payday loans.

Meanwhile, the guy running the payday loan chain rakes in millions. Not because the system is "rigged" against the little guy, but because millions of people willingly hand over their paychecks to him.

In other words, if you make a lot of really stupid financial decisions, you will end up broke, and the smart people, who take advantage of your stupidity, will end up rich.  Maybe this is what causes income inequality.

So you go to school to party and get a stupid useless degree, and pay for it all with private student loans.  You end up broke, some guy who owns stock in the bank who lent you money (which could include me) ends up rich.

No one put a gun to your head and said to do this.  And no, when I was that age, I wasn't that stupid, even though my mind was usually fogged with drugs and alcohol.

It begs the question - how far do we go to protect the stupid?

The problem is, you try to intervene in stupid people's lives and they resist you.   We have tried to set up a consumer protection agency in the USA, and it is being shouted down by the very people who are victimized by student loan fraud, payday loan fraud, and all sorts of predatory lending practices.

Well, they don't shout it down directly.  They vote for a candidate who promises to outlaw abortion (40 years and counting) or gay marriage or whatever.   People are stupid enough to vote on "social issues" and not their pocketbook.  And even when they think of pocketbook issues, they think of "lowering taxes" - for the wealthy.  Because these folks don't pay hardly any taxes to begin with, and moreover don't understand what marginal rates mean.

It is an interesting conundrum.  From a personal perspective, I've given up (long ago) with trying to "help people" as I realized that people don't want to be helped.   Even this blog generates hostility from folks who want to make poor financial decisions and want them validated as good ones.

People flame me for saying that maybe getting granny to co-sign your Camaro loan is a bad idea.  Or that leasing a car is idiotic.  Or that obsessing about a would-be disease is probably not a good way to spend your life.

People want to be victims, it seems.   And that right there is the key to success in America, or indeed, the world.  Stop seeing yourself as a passive victim of circumstance and own up to your own malfeasance - and then take action to change things.

If you are taking out payday loans, it is not because some grand conspiracy is forcing you to.  It is because you are an idiot and cannot live within your means - and you view a loan as some sort of answer to your problems, when in fact it is just making them far, far worse.

The reviled 1%'ers can't victimize you if you choose not to play their game.  And not borrowing money is one way to not play the game.

"But I need this money to live!" they cry, with the notation, "sent from my iPhone" attached.   In most cases, it is not a matter of buying a loaf of bread for the family, but rather maintaining a lifestyle they think they are entitled to.

And no matter how you slice it, borrowing money just makes you poorer, not richer.  If you truly need money to buy bread for your children, borrowing it means only one loaf less, next week!

Don't get me wrong.  I am all in favor of reigning in these scumbags who exploit the poor.  But my experience in this world tells me that waiting for laws to change or regulations to be enacted (externalizing at its best!) is futile.  These folks have the money to keep the politicians in power - and get their own victims to vote for them.

So it comes down to one thing, and that is personal choice, which is the one thing we still have, even if we don't think we have it.
UPDATE:  How many people decry "income inequality" on their Facebook page and fail to see the irony?  How many complain about how workers are treated and yet order unnecessary crap from Amazon?  How many people bought Telsas to virtual-signal their political correctness, only to now realize that like the Volkswagen, it is a car built by a Nazi?  If you want to put an end to income inequality, one good start is to stop giving your money to rich people.
Newer Post Older Post Home