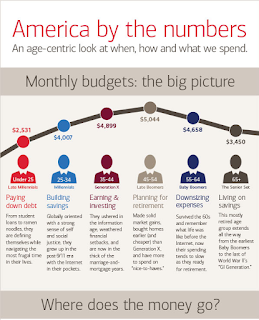 Is comparing yourself to others a worthwhile endeavor?  Probably not.


Bank of America has some weird infographics that they throw at you when you log off (I haven't closed my account yet, as I am still traveling).  This one about the "average family budget" is one of them.

It is, of course, part of a pitch for their investment counseling services, and there is a helpful link on the side bar to "get you started" getting your shit together.  Because no matter how you look at these numbers, you probably think you are not doing something right.

For example, with an "average" monthly budget of $5000, that means the "average" family is spending $60,000 a year.  If you make less than this, you feel inadequate.  If you make more, you wonder where the hell all your money is going!   No matter how you slice it, the data is not very useful.

How did they get this data?  Was it self-reported or culled from some database?  Perhaps their own database?   Does it include people on welfare as well as Billionaires?  If so, these numbers may be skewed - or meaningless.  Without information as to how the data was collected, it is sort of worthless.

Moreover, what is an "average" family?   Two people?  Twelve?   It depends on whether you live in Manhattan or Salt Lake City.  And who has an monthly housing budget of $1700?   For most people, this number might be ridiculously low - less than their mortgage payment.    If you throw in utilities, taxes, insurance, and repairs, the actual cost comes out to a lot more.

The transportation numbers seem plausible - for a family with one car.  As I noted in another posting, with depreciation (the real way to calculate automobile cost, not monthly car payment), fuel, repairs, tires, oil changes, insurance and taxes, you can spend upwards of $8000 a year on a car.  If you have two, $16,000.  If anything, the budget numbers here are artificially low, as I suspect the data is self-reported, and most people are reporting their monthly car payment and insurance costs, not the actual costs of ownership (which few of us actually bother to calculate).

The healthcare thing is also misleading.  I spend about $400 a month on health insurance, but pretty soon, this will double when I switch to Obamacare.  A family of four?  I suspect they pay a lot more than I do.

And so on down the line.  The kicker, of course, is that the "average" person is supposedly spending $600 a month on "pensions and personal insurance" whatever that means (as opposed to corporate insurance?  WTF?).   This means the "average" American is putting away $7200 a year into their pension plan, which sounds pretty implausible to me.   Don't get me wrong, it would be a good thing if people did this.  But the numbers I am reading the paper seem to tell another story.

Well, that is another example of bad data as well.  This cheerful CNN story reports that the "average 401(k)" tops $91,000, but careful reading shows that it is the average of 401(k) plans at Fidelity only.  And no word on people who have no saving plan at all. If you average in all those zeros, well, the numbers look different.

Food Budget:  BoA says $659 a month.  Yes, I spend that, and another $600 on restaurants and liquor.  So we are looking at $1200 a month, or about double what BoA says is average.  Again, I suspect they rely on self-reported data, and most people merely report what they think they spend on groceries alone.

Transportation:  Boa says $899, but since I own two cars that are depreciating, I can reliably estimate the actual cost is about double that.  Not in terms of checks I write every month or how much I spend on gas, but the actual overall cost of ownership per month, taking into account that I am buying a $25,000 car and in ten years, it will be worth about $7,500.

Housing:  BoA says $1583, but since I have no mortgage, my monthly costs are closer to $850.  If I had a mortgage, the monthly cost would be closer to $3000.   Again, however, we are not talking about overall transaction costs.  If we factor in appreciation, the monthly cost may be lower.  So far, my present house has been fairly flat in value, so this is not a factor yet.  But for others, it could affect the "monthly cost" calculation.   BoA is talking cash-flow, and I'm talking overall cost - real costs, which are far more important than cash-flow.

Healthcare:   BoA says $365 which is nearly spot-on to my current pre-Obamacare health plan.  However, this will change this year as legacy plans expire December 31st.  Estimates of coverage on Obamacare seem to be more in the $800 range.   I am not sure how anyone making $60,000 a year (the "average" in the BoA chart) is paying $365 for a family - particularly with kids.

Education:  My balance is zero, as I paid off my student loans about a decade ago, and have no kids to put through college.  It seems odd to me that in this era of $40,000 tuition bills that $165 would pay for school.

Entertainment:  I am not sure what this encompasses, but I don't spend nearly close to $256 on movies or whatnot, as I don't have cable TV and the allure of the movie theater wore off once I was no longer a teen.   $7.99 on Netflix.   Or are they counting restaurant spending in this category?

Pension:   $639 would be an awesome number for most folks.  Myself, well, I already have money and at this point in my life am not putting too much more away - closer to $400 a month, in pre-tax and after-tax savings. Or are they counting re-invested dividends and interest?  If so, the number would be much, much higher.  My goal during the last ten years of my working life is to let the nest egg grow and work enough to pay the bills.   Adding savings at this point isn't going to increase my retirement account much - that is what you should be doing in your 20's and 30's - and letting compound interest work for you!

And that last part is the real kicker.  The tag line is "tomorrow will be here before you know it" and the implication is that you should start investing now (with them) and yes, investing is a good idea.   But the chart presents a poor normative cue in that it suggests that it is "normal" to start saving later in life, trying to play "catch up" than to save early on and let compound interest do all the heavy lifting for you.

And sadly, that is how most people save.   They wake up one day in their late 30's or 40's - or even 50's, and realize that they are not putting enough money away and then try to play catch-up, as the graph illustrates.

However, if you can put the money away early on, you can afford to "coast" to retirement, or if you lose your job (which happens a lot) in your 50's, you won't have to worry about living your golden years in poverty.

As I said, comparing yourself to the norm is probably a bad idea.   And Bank of America presents a lot of bad ideas as norms.

UPDATE ON BoA Fiasco:   Payments that were interrupted by BoA's summarily "freezing" my account for "verification" after more than 15 years as a customer, eventually went through, although I had to log onto the Blue Cross website and manually re-submit my payment for September to avoid having my health insurance cancelled.

All of my "bill pay" entries are now erased, so I cannot make any bill payments on the road.  Names, account numbers, mailing addresses, etc. are all missing and have not been re-instated.  I am not sure why BoA thought this was necessary  or why their database did not include my citizenship and occupation (the so-called reason for the freeze in my account).

Like I said, maybe it was a way to try to get me to stop using billpay, which costs them a first-class postage stamp every time I send an e-check to my lawn guy.

I set up some new bill pay accounts - at Ameris Bank.   I am not going to bother using BoA for bill pay as I will be transitioning to a new bank when we get back home.

I cannot use a bank that I cannot trust.  And any bank that summarily freezes my account (and ERASES all my billpay accounts) for no reason while I am in the wilds of the Canadian Rockies is not a bank to be trusted!
Newer Post Older Post Home