Yum! Brands and Why the Financial Media Gets It All Wrong 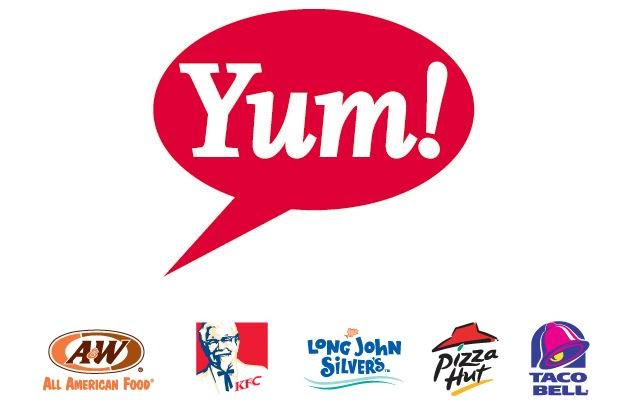 Is YUM! Brands going out of business?  Hardly.  Although to read the media, you'd think they were teetering on the edge of bankruptcy.

In San Antonio, they have the riverwalk.  I haven't been there in 40 years (no, really) and it has really changed.  We put our bikes on the bus and went downtown and rode a few miles South to the Blue Star arts compound, where they have a microbrewery.   Further on is the Mission Conception, where they are promoting making a Franciscan Friar a Saint (much to the chagrin of native Americans).

Of course, they were giving away USA TODAY and on the bus ride back to the camper, I read no fewer than four articles about YUM! Brands, three out of four of them being sensationalist and basically wrong.

YUM! Brands, which I am a shareholder of (among many other things) owns the KFC, Taco Bell, and Pizza Hut chains, and about half their revenue comes from China, of all places.   Recently, there have been two problems for the company in China.  First, there was a cheesy "expose" piece on Chinese television alleging that one of their stores was using "expired meat" in the foods.  This was sort of a piece of America-bashing, which the Chinese love to do on occasion (while driving their Chevies and eating their McDonald's and Drinking their Starbucks - and planning their vacation to the Grand Canyon).   And predictably, sales slumped by a few percentage points after that.

But on top of that, the Chinese economy is starting to slow down - as anyone with half a brain could have predicted.    No, really.  It is impossible for anything, anywhere, to continue growing indefinitely.  Even our universe will stop growing some day - and start to collapse.  Of course, this slowdown (which is pretty trivial) doesn't mean China is closing its doors and shutting down for good.  That would be idiotic.

And similarly, so long as there are stoners in the world, YUM! Brands, which owns Taco Bell, will continue to stay in business and thrive.  Who else orders and eats tacos with shells made of Doritos chips?   Who else eats "Chalupas" - the taco-within-a-taco that only Taco Bell could come up with?

And what is the real damage to the company?   Well, the company posted a quarterly dividend of $1, while analysts were expecting a dividend of $1.07.   OMG!  The place is tanking!  Oh, wait, we're talking seven cents here, or a difference of about 6.5% below expectations.   And expectations are just that - someone's wild-ass guess as to what profits should be.  Frankly, if you can predict this with a 6.5% error, then you are doing pretty good.

Like I said, the media reports this with typical gloom-and-doom, as gloom-and-doom sells newspapers, catches eyeballs, and generates click-through revenue.  Even the one article in USA Today that was rational about the whole thing, had a click-bait headline, "Is YUM! Brands Cooked?".

Sadly, a lot of people read headlines and fail to do any real analysis.   YUM has a P/E ratio of 32.9, perhaps a little high, and a dividend yield of 2.67% which beats what my bank is paying (or the government is paying).  So there is a solid business there.

Some investors are calling for the company to spin-off its Chinese division as a separate company.  The perception is, I guess, that there is more risk in China - and more growth - and the two operations (US and China) are so fundamentally different as to warrant different operating structures.  I am not sure this is a good thing or not, but in the long run, it is probably irrelevant.

Why?  Because while you may think of a fast-food chain in terms of the building and the tables and the deep fryers and the cash registers, the real value is in the branding and the products and the sales.   If a store becomes unprofitable, you close it.   And usually, these fast food operators make back all the money they invested building the store within a year or two, perhaps less.

So let's say there is a worst case scenario.  The Ghost of Mao Zedong rises from the grave and denounces Western Imperialism and tacos and Chinese people stop eating at Pizza hut in droves.   YUM! closes all its stores in China.  What happens?

Well, yes, profits would drop in half overnight.   The dividend would go from $1 a share to 50 cents a share.  The share price would likely drop in half.   It would be pretty horrific.

But the company wouldn't go out of business.   Because there is enough of a business model right here in the States to keep it going, albeit on a smaller scale.

However, since dead Communists aren't likely to rise up from the grave anytime soon (as they don't believe in an afterlife anyway) and as Chinese people don't seem too ready to throw off the yoke of Western Imperialism anytime soon (indeed, they embrace it more than we do), it seems the worst that can happen to YUM! Brands is that sales in China may slow down a bit, as the Chinese economy does.

But hey, that isn't as catchy a title as "YUM BRANDS COOKED!" and doesn't get people to click on the article or give them something to talk about at the water cooler.  "Hey Ted, did you hear Taco Bell is going bankrupt?  I saw it on CNN!"

It is like the rest of the media, who are reporting on a "bear market" with apparent glee.  The real story is, of course, that the market is on its way back up, after a minor correction last month (well, at least MY portfolio is back up, but then again, I didn't buy any Facebook stock - but even that turkey is back up!).   Since profits are reported quarterly, the recent correction occurred near the end of the quarter, which allows financial journalists to concoct odd statistics like "Worst third quarter report in 40 months that was reported on a Tuesday during a Blood Moon".

The reality is, of course, markets go up and down.   And within recent memory, we've seen horrific losses  and heroic gains.   In February of 2009, people freaked out and sold everything (because a Negro President was being sworn in) and the market dropped by nearly 1/3 or more.   Within a couple of years, though, these losses were gained back, and then some.   Those who sold out and bought gold (or worse yet, government bonds) basically locked in their losses.

But again, for the small investor, the main idea is to diversify.  Put half of your money in a mayonnaise jar and bury it the back yard, and the other half bet at the dog track (sorry, I heard that on the radio the other day).      There is no real "secret" or "trick" for the average investor, or indeed for anyone.   Folks who hit it big are largely lucky, nothing else - although everyone will flock to them for "advice" on how they did it - and then turn away unsatisfied when they find out there is no sexy advice to be given.