Duck Commander Wine - How Wal-Mart Got Into Trouble 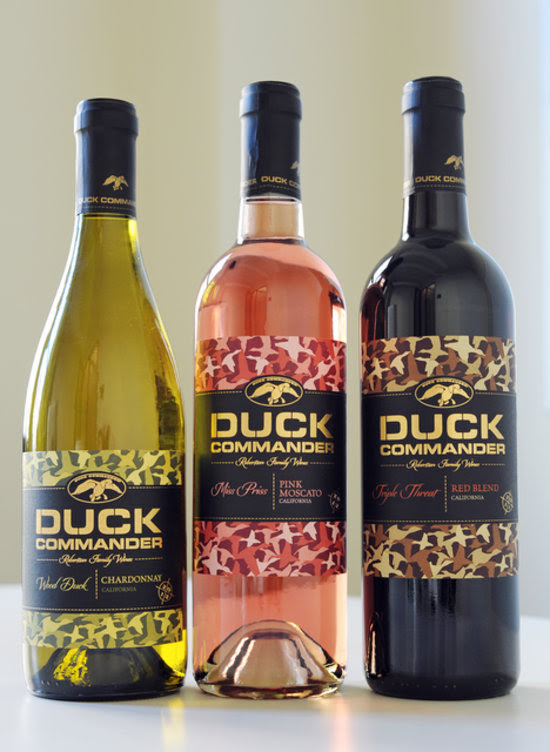 Wal-Mart's temporary troubles can be traced to half-assed buying decisions, like Duck Commander wine.  A complex, overwrought and inauthentic wine, heavy with intolerance, with notes of misogyny, slight overtones of racism, and a heavy homophobic finish.  Leaves a bad aftertaste.  37 points on Wine Speculator.


Traveling across country, we've had a chance to visit a lot of Wal-Marts.  For the RVer, they can be handy, as you can get a new tire for your trailer, or a new battery for your car, while buying groceries, gas, and RV supplies (many have a large selection) as well as beer and wine and sometimes even liquor - as well as propane.  Some RVers even sleep overnight in the parking lots.  We've seen all different kinds of Wal-Marts, from immaculately maintained stores in small towns, to run-down "ghetto" Wal-Marts in the big city.

One puzzling aspect of Wal-Mart is its recent decision to buy a lot of brand-name and celebrity endorsed products.  Traditionally, Wal-Mart always had "the low price, always" which meant that the product selection was limited to generic and non-licensed goods.   If you wanted a brand name product, chances are it wasn't at Wal-Mart.   Instead, Wal-Mart had its own line of inexpensive brands, such as "Old Roy" dog food, Oak Leaf wines, Great Value foods, and whatnot.

As I noted in my Great Value Woven Squares posting, many of these generic store-branded products are a far better value than brand name goods - and value is supposed to be the name of the game at Wal-Mart.   However, the management of the company has decided to move more toward brand-name products and away from store brand, and as a result, there is five feet of shelf space (six tiers high) of Nabisco Triscuit crackers in every flavor, but only one tiny hole in the display with store brand, which is usually sold out.

Is this a good strategy for Wal-Mart?   And are brands that are little more than celebrity product endorsements a good idea?

The Paula Deen episode is a case in point.  (If you can't remember her name, just google "Racist Lady In Savannah" - she is the first hit).   Wal-Mart carried a line of her goods, and then quickly un-carried them, placing them in their "closeout" section along with the rebel flags.   I am not sure her smiling face on a pot or pan sold very many pots or pans.  My personal reaction to product-endorsed lines like this is that the person whose name is going on the product is getting paid to put their name on it, not that they personally selected or manufactured the goods.   I don't take Paula Deen's name on a pan as some sort of endorsement, as compared to say, a brand name.

And besides, I discovered recently that inexpensive pots and pans such as a set made by Tfal and sold at the wholesale club for $89 is a much better deal than even Calphalon.

K-Mart went through similar gyrations with its Martha Stewart Living line of products.  It was an odd match to begin with - upscale Stewart selling endorsed products at decidedly downscale K-Mart.   Once she was arrested, it certainly got awkward.   Today, I doubt anyone cares whether or not their sheets are endorsed by the diva of domesticity.   And besides, 300 thread count is so passe today - with 450 and higher counts now the norm.

The Duck Commander/Duck Dynasty crew fall along the same lines.   Suddenly, every single goddamn thing in Wal-Mart has camouflage and "Duck Commander" on it, no matter how ridiculous the connection is.   Duck Commander wine is the most ironic of these, as the Duck Dynasty people, who I am now convinced are just putting on a piece of political theater (much like professional wrestling) have been trying to conceal their hidden yuppie roots for some time.   Selling white wine sort of blows their cover.

But who actually buys this shit?   I rarely see anyone in Wal-Mart wearing a Duck Commander shirt.   Perhaps if I attended more mud bogs, I would see them more often.   I do, however, see them on sale, marked down, and in the closeout section - which tells me that perhaps these endorsed products are not as popular as Wal-Mart thought they would be.

Speaking of closeout section, Wal-Mart has the worst.   If you loiter in these messy aisles (often between the paint and garden sections) you will see a land of lost toys - broken bits, returned things, oddball products, all "marked down" by only 5% or so.  No real bargains to be had there, really.   It is as if Wal-Mart just can't let go of things and mark them down and write them off.   Do they have hoarding disorder?

Other retail chains clear their shelves of unsold goods by marking them down steeply and making them go away - leaving room for products that will actually sell.   Or by returning unsold merchandise to the wholesaler, if possible.

But getting back to the main point, just as McDonald's seems to have lost its way and forgotten its primary mission (fast food, cheap food, served quickly), Wal-Mart seems to have lost its way as well.   Eschewing the "low price" model pioneered by Sam Walton, it has left that market to stores like Dollar Tree which rarely has celebrity endorsed products, but always has the low price, always.   A dollar.

Recently, we have noticed that Wal-Mart appears to have Dollar Tree on its radar, and is offering a limited line of inexpensive bargain items on a back wall, for very low prices.   Perhaps this is only in the test-marketing stage, I am not sure.  I think the idea is to get people to buy products there, while they are shopping at Wal-Mart, rather than make a stop at Dollar Tree first.

While it is an interesting experiment, it is, once again, an example of Wal-Mart trying to be all things to all people and carry too many lines of goods (do they really need to carry 400 different brands and models of flat-screen televisions? Or is that just for show?).    Selling 79 cent rolls of paper towels isn't undercutting Dollar Tree, it is undercutting their own lines of paper towels.   In other words, they are underselling themselves.  Maybe if the "low price, always" model was brought back and celebrity endorsed products (which are always higher in price) are ditched, sales might pick up.  Just a weird idea, of course, but one that Sam Walton came up with as a winning formula decades ago.

I also think it is a bit condescending on the part of the buyers in Bentonville to stock white-trash celebrity endorsed crap.  I can just hear the voices in the meeting rooms in Bentonville - "But this is what they like to buy" - as if all of the people who shopped at Wal-Mart were like the people of Wal-Mart.  Carrying "Duck Commander" wine makes Wal-Mart a parody of itself, really.  It is as if Wal-Mart just gave up and turned itself into a South Park episode.

Just like Cartman, Wal-Mart seems to be wallowing in its own crapulence.

Does this mean Wal-Mart is going out of business?  Hardly.  Just as McDonald's has somewhat lost its way, Wal-Mart has followed some bad advice and lost track of its founder's vision.    Some of these awkward mistakes will no doubt go away, eventually, and the company get back on track.   Sales are down at Wal-Mart because they no longer sell cheap products, but rather brand-name and celebrity-endorsed products that are not much cheaper than what is sold in other stores.   Once the low prices go away, the compelling reason to shop there evaporates as well.   Particularly when there are other low-cost outlets out there.

I am not sure their present strategy of squeezing suppliers will fix the problem in the long run.   What Wal-Mart shoppers want is low prices, not Rachel Ray crackers, Paula Dean pots, or Duck Commander wine.

P.S. - How can you quickly tell if a Wal-Mart store is well organized and run?   Go to the bicycle section and see how well the bicycle tubes are organized.   If they are all lined up in neat rows and properly priced, chances are the manager is running a tight ship.  If they are all in a pile falling down onto the floor (as at our local Wal-Mart, always), chances are, you are in a ghetto Wal-Mart.  Another good indicia is to request a propane exchange and see how long it takes them to find the key.   If they trot out there in a minute or two, tight ship.  If you are told that Darnell took the keys with him to lunch, ghetto.

P.P.S. - One of the Duck Commander wines is a Muscato.   Muscato is a soft drink, not a wine.
Newer Post Older Post Home