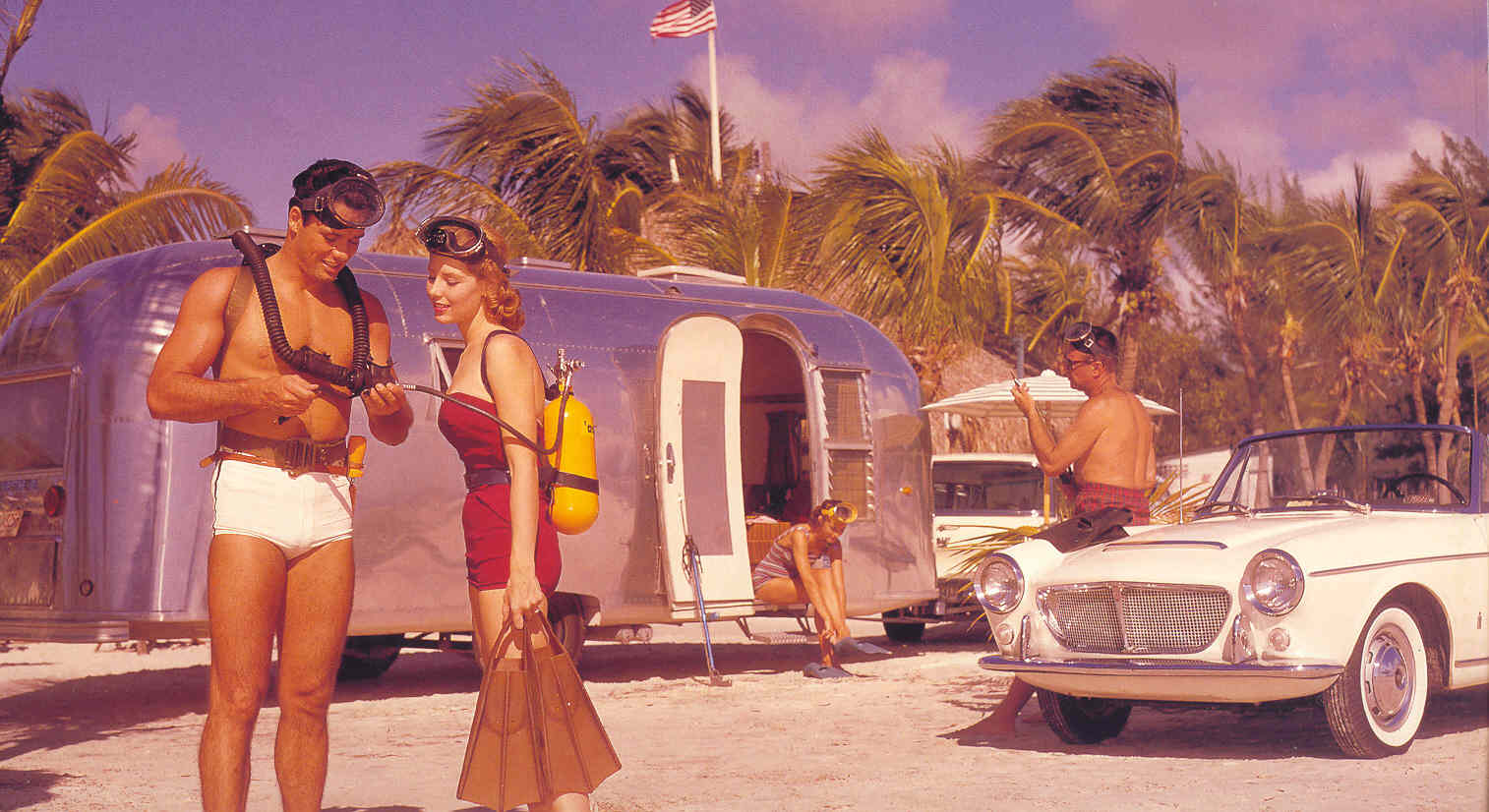 Sadly, you can't park your RV on the beach anymore, or rent a sporty little Fiat to boot.  But does that mean the RV business is dead?  Maybe not!

In my posting The Future of RVing, I speculated that the future of the RV business might be bleak, as there are fewer and fewer places to actually park your RV these days.   Our experience this summer is a case in point - so many of the places we wanted to visit were marked "campground full" and reservations were not obtainable.

With the return of cheap gas, Americans are embracing RVing again, and many foreigners are coming here to rent RVs for a week or two.  We met many folks from Germany, France, Holland, England, and Australia, who came here, rented RVs and wanted to "See America" or Canada.  Even folks from cash-strapped Russia were getting in on the deal.   It seems that driving a lumbering class-C motorhome is something foreigners really want to do.

(And routinely, Herman the German decides that since he is in America, he might as well live like an American and go through the drive-through at McDonald's - shearing off the roof of his rented motorhome.  The folks at one rental agency told me it happens regularly).

On our last trip to Austin, Texas, we read a story about how folks were being thrown out of a trailer park, after new owners went to a seminar and decided to buy the place and double or triple the lot rents.  A fellow runs a program called "Mobile Home U" and charges people to tell them the obvious - you can make money through other people's suffering.

Mobile home parks are not RV parks, but a different animal. They have mobile homes, which despite their name are anything but mobile.  Today, we call it "manufactured housing" as it is a more adept moniker.   Once situated in a park, a mobile home is hard to move.  A licensed mover is needed, permits applied for, and the mobile home has to be in condition to be towed.

Most are ensconced with screen porches which have to be torn off and thrown away.  In some parks, the owner requires that you cut off the hitch with a torch - to insure the unit never leaves.  So if the owner evicts you, or raises your lot rent, often all you can do is abandon the trailer and move elsewhere - losing whatever you spent on the trailer itself.

The guy at Mobile Home U points out that a lot of trailer parks are Mom and Pop operations, run by the "greatest generation ever" folks, who are all at retirement age or dead.  They owe nothing on the park and have deferred maintenance for years.    And they have become friends with the tenants, so they haven't raised rents to be competitive with the market.  A lot that should rent for $600 a month might be renting for $300.

And since Mom and Dad want out, and no one wants to buy a run-down mobile home park, you can buy one for cheap.   And the first thing you do (according to the guy) is raise the rents and toss out all the trash living there.

And trash is living there.  One problem with older parks is that as the rents are so low, they attract the most odious sort of people - meth heads and drug dealers or folks who want to park five abandoned cars on the site.

Another problem is that some parks, such as in Florida and Arizona, start out as winter "snowbird" havens and then degenerate into living space for full-time residents, with predictable results (the snowbirds leave, of course).

We are in such a park in Phoenix.  Phoenix is what happens when urban sprawl goes unchecked.   John McCain lives here, and probably thinks it is a swell town.   But the park we are in was once in the desert, and was an oasis for retirees looking for a cheap place to spend the winter in a warmer clime.

Fast-forward 40 years and today it is part of the greater Phoenix metro area - with four million people surrounding it.   The snowbirds are largely gone and full-time residents have replaced them.  The desert is gone, replaced by miles of strip malls, car dealers, and apartment buildings.

The new owner wants to turn it into an RV park.  The math is compelling.   Folks with bus motorhomes will pay $600 to $800 a month for a lot space.  People staying for a few days will pay $50 a day or more.  Event though the place may be vacant for half the year, you make more money with a lot less hassle.

So they have evicted all the mobile home residents.  Some are brave enough to try to move their homes.  Others have donated them to charities, who will move them to Mexico for resale.  Others are being cut up and hauled away in dumpsters.  And as you might imagine, the residents, given six month's notice, are not happy.

As I noted in another posting, setting up a mobile home in a trailer park is not really a bright move, which is why people who are not very bright tend to do it.  Once you set up the trailer, you can't realistically move it, so you are stuck there, whether you like it or not, and whether the owner raises the rent or not.   It is like renting an apartment that you an never leave from.  Who in their right mind would do this?

It is poverty-think of the first order.  If you can buy a trailer for cheap and are not afraid to walk away from it, then it might work out.  Or I guess you could rent one.  But regardless, it is a false value to "buy" a trailer and then pay in rent what others pay to rent an apartment.   And that is why poor people do it, because poor people make poor decisions.

Gentrification is, to some, a dirty word.   But it has been a trend over the last few decades, and the overall results have been positive.  In the 1970's, New York City was a dangerous, dirty place.  Only poor people lived in the city, unless they had a Penthouse apartment.   If you had money, you moved to the suburbs.

The problem is, of course, that the funky artists and beatniks and gays who took over the neighborhood and made it an interesting place to live are now facing eviction as folks with cash move in and decide it is a nice place to live.   It is a pattern repeated again and again, worldwide.

In London recently, a bunch of self-styled anarchists decided to vandalized a "gentrified" restaurant called "Cereal Killer".   The restaurant specializes in selling cereal - breakfast cereal - at about $10 per bowlful.  Frankly, I don't have much sympathy for that sort of thing.  New York has seen the same trend - hipsters taking everyday foods and trying to make them into something they are not.  First came the cupcake craze, then grilled cheese sandwich restaurants (I kid you not) then mac and cheese, champagne and hot dogs, and so forth.  They've even ruined Pabst Blue Ribbon Beer. 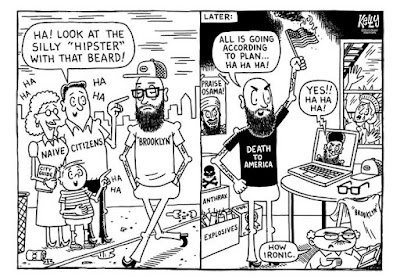 Kelly's take on Hipsters, from The Onion.

So maybe they have taken a good thing too far.  I don't know.  All I know is, you can't artificially control property values.  It's been tried and it doesn't work.  I recently met a retired lawyer from New York City.  She did elder law, and rented an apartment in mid-town Manhattan for $350 a month.  You read that right.  She had one of the last "rent controlled" apartments in the city, and the rent couldn't be raised by much over the years, even though she made well over $100,000 a year.  A program designed to help the poor find affordable housing ended up just being a sop to the lucky few who could snag such an apartment.  And it is scandalous how even some celebrities have such pied-a-terres tucked away in the Big Apple.

But overall, when gentrification comes, there is little you can do to stop it.  Yes, there have been protests and even riots, but in most cases, when the property values go up, well, you can't stop them from going up, just as you can't wish away bad weather.   Move on and move out, and save your emotional energy for something more constructive.

But perhaps what is happening in the park we are in, is part of an overall trend.  As I have noted in other postings, some RV parks degenerate over time, with "full-time" people living in RVs, with junk and stuff all around them.  This drives away the "overnight" traffic who will pay more for a few days' stay than the meth-head in the clapped-out trailer will pay for a month.

Mom and Pop who run the place will tell you that "It's a lot easier with full-timers, less hassle and regular rent checks".   But the Mom and Pops are dying off, and many RV parks we've stayed in have been recently bought out by corporations who are remaking them into RV resorts - and tossing out the run-down trailers with sketchy people living in them.   There are so many people RVing today, and they all want a place to stay for the night - a nice place, too.

Again, you could complain about the "unfairness" of it all, or hook up your RV and move on.

Or maybe use this as a wake-up call to re-think your priorities.   Some of the the mobile homes in the park we are currently in have several high-end cars and motorcycles parked in front of them.   The owners don't want to spend money on rent or a mortgage, but instead on depreciating motorized assets and and mobile homes.   For what they spent on the Corvette, the Navigator and the Harley - plus the lot rent and the cost of the mobile home - they could have bought a house.

It is tempting to feel sorry for them, and to some extent I do.  But I suspect you will see a lot more of this sort of thing happening down the road, either way.